He’s can’t be positive but the big 15-point buck 52-year-old Jerry Denman shot on Dec. 8 may well have been the buck he had hunted for the past several years, a buck he had given up on, assuming it had been take by another hunter or maybe died of old age.

“I began hunting a nice 10-point buck back maybe seven or eight years ago,” Denman said. “This buck would show up on camera each year until about the time squirrel season opened in early October and wouldn’t show up again until deer season was over.”

In 2014, Denman, who hunts a 33-acre tract of property in Red River Parish his neighbor lets him hunt, downed a 10-point buck but realized it was not the same deer he had been after the past two seasons.

“In 2017, I put out my cameras and got a single photo of a big buck with a heavy rack I assumed may have been the big 10 point I’d been after,” Denman said. “The rack was heavy and quite wide.”

Pulling his cameras after getting this one photo, Denman said he has a problem of checking his cameras too often and didn’t want to leave his scent in the area or otherwise disturb this big buck. Hunting the area for the next two seasons, the buck never showed up when Denman was on his stand.

“As I was working for a gas company and not able to hunt much this past season, I suggested to my fiancé that she sit on her stand and see if she might have an encounter with the deer,” he said. “She was unable to fit sitting on a deer stand into her schedule so I decided to go give it a try.”

Lost in the weeds

On the afternoon of Dec. 8, Denman climbed into his fiancés stand, a tripod that overlooked a feeder. The area around the feeder was covered in weeds probably six to seven feet high with only the area immediately around the feeder open enough to see. 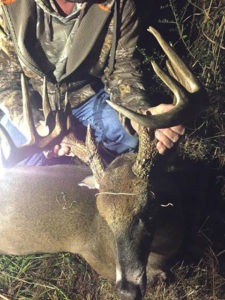 “I was sitting on the tripod when I saw something coming through the tall weeds and it was headed toward the feeder,” Denman said. “When it stepped out next to the feeder, I was looking at a really big buck so I eased my Mossberg .308 up and began looking through the scope when the buck began walking away and was lost in the weeds. I assumed it was over and I put my rifle down but decided to give it one more look. I raised my rifle again and was able to get my scope on the neck of the buck. I squeezed the trigger and saw the buck jump and take off. I thought I heard a crash.”

It was getting late so instead of walking down and looking for the deer himself, he called his neighbor to bring his four-wheeler. The neighbor, his son and the owner of the property joined the search and found a small bit of blood. With the weeds so high, Denman followed the direction the deer had run and walked up on the buck that had expired no more than 10 yards from where he was standing when Denman shot.

The buck was estimated by a wildlife biologist to be in the 8- to 9- year old age bracket. It weighed 238 pounds and sported a heavy rack of 15 points with an 18 ½-inch inside spread, 5 ½-inch bases and 25-inch main beams. 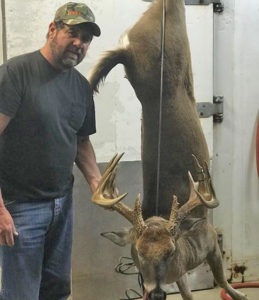 The buck was taken to Bastrop and entered in the Simmons Sporting Goods Big Buck Contest where it currently occupies first place in the Louisiana big buck category with a score of 180 3/8 inches.

The 33 acres Denman hunts is surrounded by hunting clubs that have been recently logged. Members of those clubs have reported seeing photos on trail cameras of the buck that had disappeared. He feels that maybe the logging activity pushed the deer onto the property he hunts.

In addition to the Simmons contest, Denman plans to take the buck to the Louisiana Sportsman Show Big Buck Contest to be held in Gonzales March 13-15.