One of my favorite television characters was the bumbling, fumbling, ego-driven deputy sheriff in Mayberry. Of course, I’m talking about Andy Griffith’s deputy, Barney Fife.

One of the outstanding characteristics of Fife was the fact that he was allowed to have a firearm, but Andy had limited him to a single bullet.

When I heard Misty Wood tell her story about a big 9-point buck she got on Nov. 13, I was immediately reminded of Barney Fife and his single bullet. Details to follow.

“I hunt on our family’s property in Lincoln Parish, an 80-acre tract located west of Ruston,” Wood said. “I had developed an interest in a big buck that had been showing up on our game cameras for the past month.”

Wood, who is a special education teacher’s aide at Choudrant Elementary School, lives in Simsboro with her husband and two daughters. On the morning of Saturday, Nov. 13, she had planned to go hunting, but since it was quite chilly that morning she decided to sleep in.

“I really didn’t want to go because it was cold that morning,” she said. “My husband, though, insisted that I get up and go get on my stand. Knowing the buck had been showing up on camera between midnight and 6:00, he felt like this might be a good day for him to show up. The buck had actually appeared on camera a little after 6:30 recently so he thought I might have a chance at him, so I got up, got dressed and headed for my stand. He stayed home to watch after our youngest daughter.”

Getting to the woods just before daylight, Wood climbed into her box stand that sits in an 18-year-old pine plantation. Shooting lanes have been cleared, a corn feeder set up out from the stand and rice bran is placed on the ground near the feeder.

“I got settled in and was playing with my phone waiting until it got daylight,” Wood said. “After it started getting light, I looked up and saw two does and a yearling at the feed. I was watching them for awhile when suddenly a good buck stepped out. I finally got my scope on him but I was shaking so bad I had to settle down before taking the shot. I shot and the deer fell.”

This is when the story became interesting. The buck was down but not out and a second shot was needed to finish the job.

“My problem was this was the only bullet I had for my 7mm 08 rifle and all I could do was watch,” she said. “I texted my daughter, Daisy, who was sitting on another stand 10 minutes away and told her to hurry over and bring her rifle. She did and I was able to finish the job on the buck.” 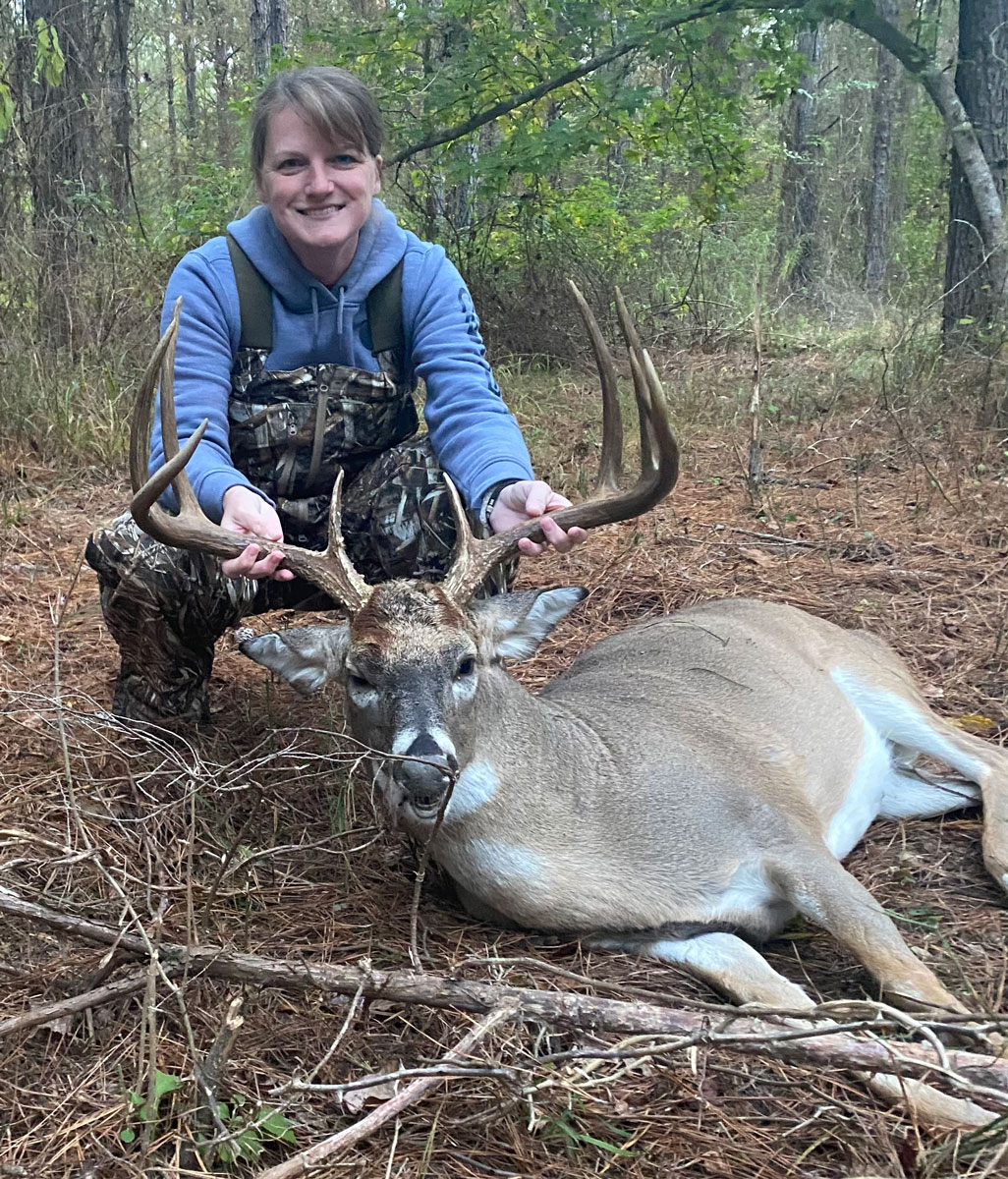 The buck was taken to Simmons Sporting Goods in Bastrop where it was scored at 142 7/8 inches. The buck unofficially sits at the top of the women’s category for the store’s big buck contest.

Now that Misty Wood has used her last bullet, is her hunting season over?