Dwaine Sampey, a 53-year-old refinery worker, has been after a particular big buck since 2016. It took three years but Sampey was finally able to finish the deal when on Dec. 2, the buck walked out at 40 yards.

“This buck has been giving me fits for the past three seasons. The main problem has been that he apparently lives somewhere else but only shows up on my place for about one week each year when the rut is going on. The rest of the year,” said Sampey, “he’s somewhere else.”

Sampey lives on his 60 acres in Natchitoches Parish along Hwy 153 between Creston and Ashland. The property consists of some 22 acres of pasture with the balance being mainly hardwoods.

He had an earlier encounter in 2016 when he was leaving for work and he looked up to see the buck standing and looking at him from 150 yards away.

“As I was leaving, I looked out in the pasture and there he stood,” Sampey said. “I ran back in the house, got my gun and the deer took off. I got off a shot but missed him.”

Group of does likely lure

The following year, 2017 as well as 2018, the buck walked in front of Sampey’s cameras several times over the course of a week when the rut was going on. Then he seemed to vanish in thin air; there were no more photos of him. 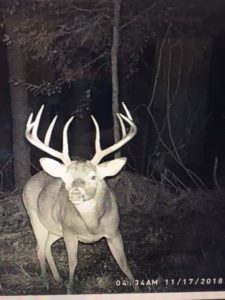 “I keep feed out all year and there are lots of does on my place. In fact” said Sampey, “I have thermal vision optics and can look out in my pasture at night and see 30-40 does just about every night. This is why I’m sure the buck would leave his home range during the rut to come check out all the does on my property.”

This year when deer season rolled around, Sampey was on the lookout for the “infrequent visitor” hoping he would show up during the rut as he had done over the past three seasons.

“December rolled around with no sign of the buck; no sightings nor trail cam photos,” he said. “I told my wife I supposed somebody had probably killed him. Then on Dec. 2, I got the surprise of my life when he walked out by me.”

Sampey can see his box stand from his house some 300 yards distant. On the morning of Dec. 2, he got in his stand before dawn and had planned to sit in the stand until around 9:30. After sitting for awhile seeing nothing, he looked down one of his lanes and saw a doe and button buck walk across far down the lane.

“A front had come through and it was a pretty morning to be on a deer stand. I had watched the doe and little buck cross when right around 8:00 and without warning, the buck I had been after for three seasons walked across one of my lanes at 40 yards. There were no does around so I suppose he was just cruising. I got my Browning 7mm mag. on him, hit the trigger and he dropped,” Sampey continued. 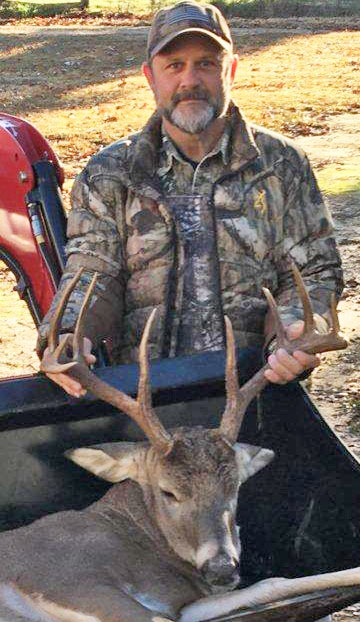 “I hunt out of state a lot and have killed some really nice bucks in Illinois and Kansas but this one was as good as any I got up there. One of my buddies asked me after seeing my buck why I go off to far away places to hunt when I have bucks just as big here on my place,” he chuckled.

The buck sported a 10-point rack with an inside spread of 21 ½ inches with one of his main features being long brow tines measuring 10 inches each. The exceptional brow tines had shown up on photos the past seasons, earning the buck the nickname “Brow Buck.” The buck was green scored at 151 7/8 inches.

“I’ve killed probably 100 deer but nothing means more to me,” Sampey said, “than getting to kill a good buck like this on my own property. That is super special.”