Fifty-six-year-old Craig Long was born with spina bifida, which makes getting around very difficult. However, the condition does not affect his trigger-finger as he squeezed of a shot with his 300 Win mag that resulted in him downing a magnificent buck on a Natchitoches Parish handicapped hunt.

“When I got out of high school, I wanted to go to work and fortunately, I got a job in the boat industry building boats,” Long said. “I worked there for 18 years but I had to give up the job because it was getting too hard on my back. A friend offered me a job at his muffler and alignment shop and I was hired because I could sit on a stool and do brake jobs and such. After 10 years, the pressure sores from sitting were getting too much of a problem so I had to give up that job. Basically I’m retired now.”

Privileged to receive an invitation to make a hunt put on by the National Wild Turkey Federation Wheeling Sportsman Program under the direction of a special couple, Larry and Ronda Johnson, Long joined the group on Dec. 7 near the village of Chopin in Natchitoches Parish.

“The first afternoon, my guide took me to the ‘Antler Shed’ blind to hunt,” Long said. “We saw a few deer, including one big bodied deer far down the lane we couldn’t tell what it was.”

That afternoon, the guide set up a pop-up blind down the lane closer to where the big deer had crossed. However, no deer were seen during that hunt.

“The next morning, Sunday, Dec. 8, it was very foggy and they asked me if I wanted to go or stay in until the fog lifted,” Long said. “I wanted to go, so my guide, Skeet Hodgkins, set me up in another blind they called the ‘Hog Trap’ blind.”

It took awhile before the fog lifted enough to be able to see down range. Hodgkins suggested Long watch out one window and he’d watch from the other. The feeder was in sight but Hodgkins suggested that if a deer came to the feeder, he’d probably be there awhile whereas the windows he and Long were watching would more likely allow them to see a deer as it crossed the lane. 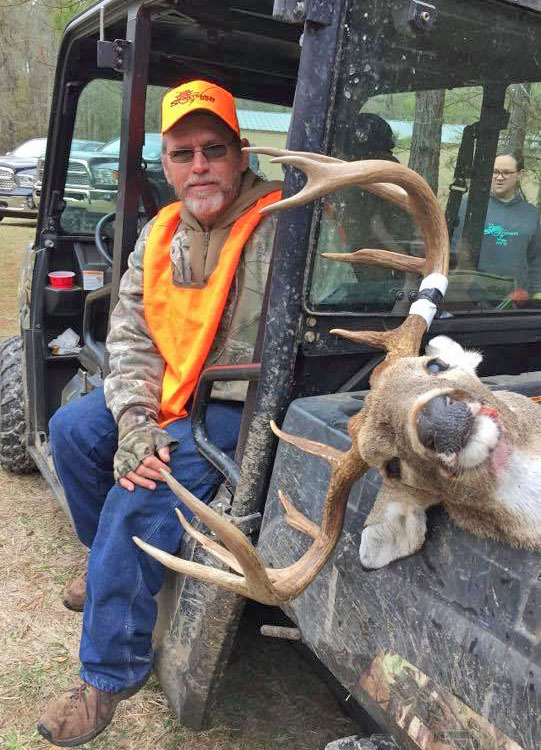 “As the fog started burning off, I had a better view of the area,” Long said. “I had picked up my binoculars to look toward the feeder and when I looked back through my window, I saw a buck that had already made it two-thirds the way across the lane. I told Skeet I was looking at a big buck and just after I said that, the deer turned and looked in our direction.”

With his gun propped in the corner next to his walking cane, Long kept his eyes on the buck while reaching for his gun.

“I was hoping I’d grab the gun instead of the cane, but luckily I got my rifle,” he laughed.

The buck began quartering toward Long as it moved across the lane giving Long a good look at the shoulder. Long touched the trigger, the buck kicked and took off to the nearby woods.

“Skeet suggested we wait awhile so after 30 minutes or so, he got out of the blind to see if he could find anything,” Long said. “After being gone a few minutes, Skeet started slowly walking back to the blind with his head down. I was afraid I had made a bad shot so I asked him if he’d found anything. He looked up with a big grin and I knew from his expression, he had good news; he told me he’d found the deer which traveled only 30 yards before dropping.” 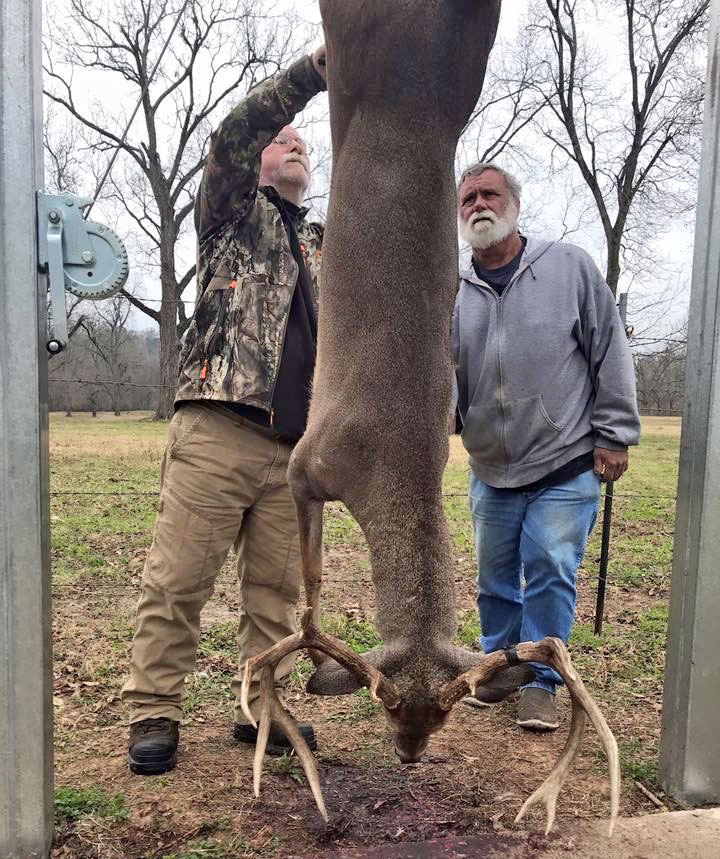 The buck was not weighed but was estimated to weigh between 180 and 200 pounds. The massive rack contained 10 points with evidence that a fork in one of his G2s had recently broken off, likely the result of fighting. The inside spread was 20 inches and the rack was scored at 161 7/8 inches.

“I had noticed when I first saw the buck, it had a slight limp,” Long said. “When we got to him, one half of a hoof on a front foot was missing, which explains the limp.”

After following a sparse blood trail, Randy Marks said a prayer and within minutes he was looking at the big buck he killed in DeSoto Parish. […]

Wahoo bite out of Venice already great, should last well into charter season

Charter captains out of Venice say that great numbers of wahoo are out in the Gulf, just waiting for anglers to enjoy once deer and duck seasons end. […]

About Glynn Harris 355 Articles
Glynn Harris is a long-time outdoor writer from Ruston. He writes weekly outdoor columns for several north Louisiana newspapers, has magazine credits in a number of state and national magazines and broadcasts four outdoor radio broadcasts each week. He has won more than 50 writing and broadcasting awards during his 47 year career.