When you’re hunting on public land and you see the tail lights of ATVs putt-putting down a trail near where you’re hunting, your inclination is to either throw up your hands in frustration or pick up and move to a new spot.

On the afternoon of Nov. 29, 33-year-old Brandon Burke, of Mansura, decided to sit tight when he saw tail lights passing by through the woods. Fortunately for him, the motorized vehicles inadvertently aroused a big buck from its bed. The 13-point buck was apparently trying to sneak away from all the noise when Burke dropped him in his tracks at 70 yards.

“Thanksgiving is always a big deal for our family. I have a camp at Mansura in Avoyelles Parish which sits on the Old River side of the Spring Bayou Wildlife Management Area. It’s been traditional for our families to enjoy Thanksgiving at the camp and a group of us hunt the area on the weekend that follows,” said Burke, a member of the Louisiana Air National Guard and a full-time mechanic at Camp Beauregard.

Some scouting had already been done prior to Thanksgiving and Burke’s father-in-law, Dale Cormier, had found a couple of spots he suggested for Burke to hunt.

“We went out Thanksgiving afternoon to check out the area he’d found and I marked the two spots he had found on my GPS,” he said.

The GPS was obviously an important part of Burke’s hunting gear because after a boat ride across Old River, it was necessary to walk roughly three-quarters of a mile to get to his hunting area; the device guided him to his spot.

“The area I was hunting was a continuation of sloughs and ridges, one after the other,” he said. “You’d cross a dry slough onto a ridge with a slough past the ridge and then another slough. While I was walking in, I noticed I had to cross a 4-wheeler trail not far from my stand. That was no problem because this is a public area and open to other hunters.”

On the morning of Nov. 29, Burke didn’t see deer but could make out the hunter orange of other hunters in the general area.

“I called my father-in-law and told him I was going to move my climbing stand to another spot to try and put some space between me and the other hunters,” he continued.

After returning to camp and helping clean two hogs Cormier had shot, he and Cormier headed back to the woods around 2:00. The afternoon was warm and after walking to within 1,500 feet or so from his stand, Burke stopped to take a breather.

“It was 75-80 degrees and I was pretty warm so I took a break before heading on to my stand,” he said. “While I was resting and cooling off, I heard something and a group of four or five deer took off. I heard a shot and then I heard 4-wheelers.”

Soon after hearing the ATVs drive by in the woods, Burke heard what he thought was probably an armadillo walking in the leaves.

“I kept looking that way and was able to make out the image of a deer,” Burke said. “The deer was moving along at a fast walk, went behind a tree and when it came out, the sunlight hit an antler and I could tell it was a good buck. When he stepped out from behind the tree, I was able to put the crosshairs on my Tika .308 behind his shoulder, pulled the trigger and he hit the ground. Soon after, I saw the tail lights of the 4-wheelers and I believe their activity pushed the buck out over me.” 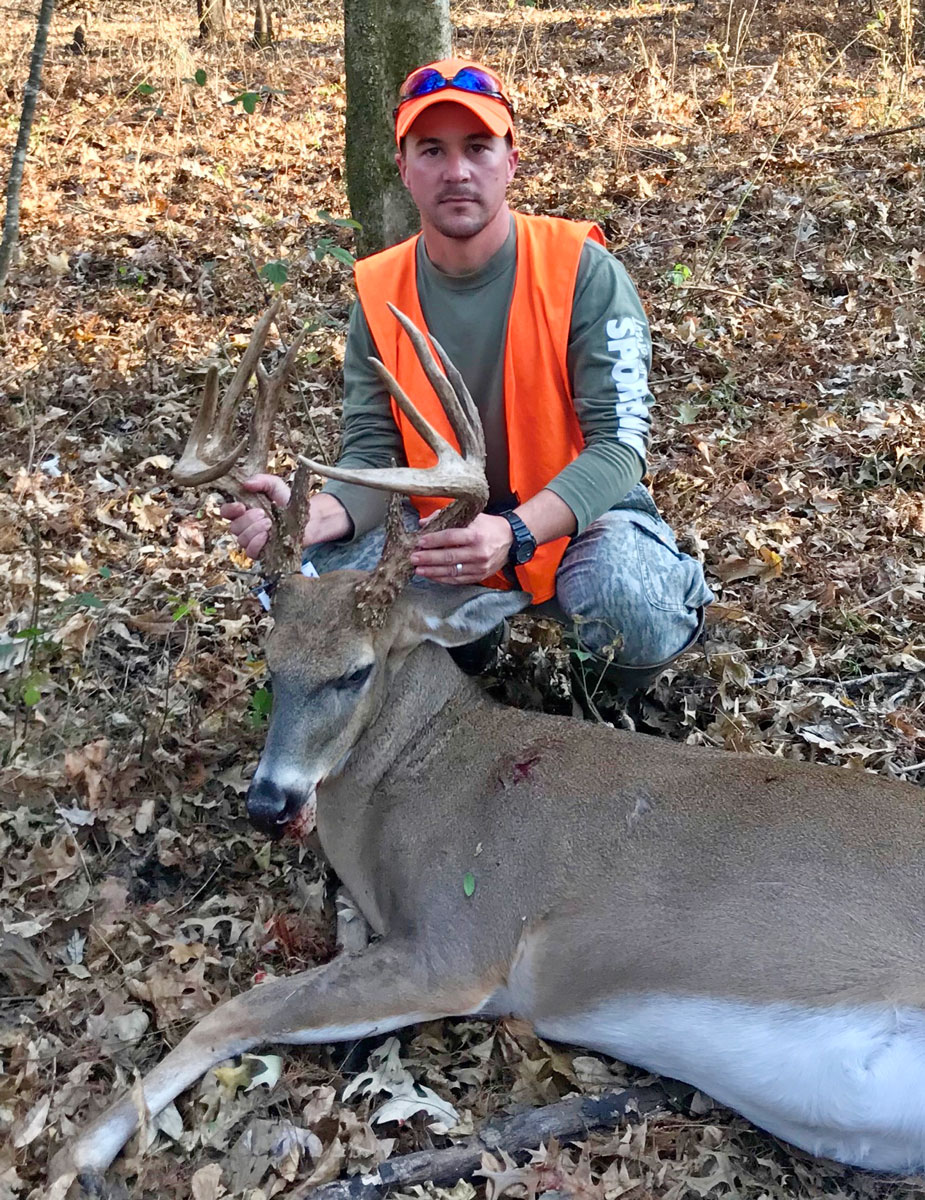 The buck, which tipped the scales at 245 pounds, sported 13 points on a massive rack. Inside spread was 14 inches but the bases measured an eye-popping 6 inches each with measurements nearly 5 inches at the last measurement up the rack. The buck was entered in the big buck contest at Simmons Sport Goods in Bastrop with a green score of 173 inches.