After following a sparse blood trail for six hours of a buck he wounded, Randy Marks reached in his pocket and retrieved a vial of mustard seeds he carries with him, said a prayer and within minutes, he was looking at the buck, still alive, just ahead.

“I was hunting with my brother-in-law on a lease we have in DeSoto Parish,” Marks said. “I work in the oil field survey business and often my works carries me to northwest Louisiana. When I’m working in the area and deer season is open, I use my hours off work to sit on my deer stand.”

This year, Marks, 38, who lives in Arnaudville in St. Landry Parish, has questioned whether his trips up to DeSoto Parish had been worth the trouble.

“We have not found a decent buck on our trail cameras, nothing more than maybe 14 or 15 inch bucks and our hunting has been not good at all,” he said.

However, on Dec. 2, Marks was working in the area, had some time off and decided to sit on his box stand for awhile that morning.

“Frankly, I wasn’t too hopeful because we hadn’t seen anything we wanted to shoot but it was a pretty and cold morning with frost on the ground so I decided to sit awhile,” he said.

At 7:00, Marks was looking over a nice clearing out from his stand when at 100 yards, he saw a deer running the opposite direction from where he sat.

“I could see it looked like a decent buck as it ran away from me,” Marks said. “I shoot a 35 Whelan and just about don’t shoot at running deer any more but as the buck got to nearly 300 yards, it slowed down, briefly stopped and looked back at me and turned broadside for a second or two before heading off the clearing into the woods. I decided to try a shot and watched the deer kick up his hind legs and was gone.”

Waiting a few minutes to gather his wits, Marks walked down to where the deer was standing when he shot and all he found was where the ground was disturbed as it took off. There was not a drop of blood to be found. He made a circle out through the woods and found nothing.

“I called my brother-in-law who was hunting nearby to come help me look,” Marks said. “After awhile, he called out to me; he’d found one small drop of blood. After thinking I’d missed, at least I knew I had hit the deer. However, the blood was thin and watery which didn’t indicate I had made a good shot.”

The pair painstakingly followed an occasional drop of blood and noted the deer was running in a straight line, even crossing a creek at one time. After nearly six hours, the pair had covered nearly 1000 yards and hope was fading. Then Marks remembered the vial of mustard seeds he had in his pocket.

“To me, these seeds represent faith, so I took one and said a little prayer that the deer would be found,” Marks said. “There was a heavy thicket where the last blood drops were found with a dim trail though it. I got on my knees, peered down the trail and there 30 yards away lay the upright buck that was looking around. A second shot to the neck and after six hours and 1000 yards, I was finally able to get my hands on the buck. What was amazing is that the buck made a wide circle and when I found him six hours later, he was within 80 yards of my stand where I first saw him.” 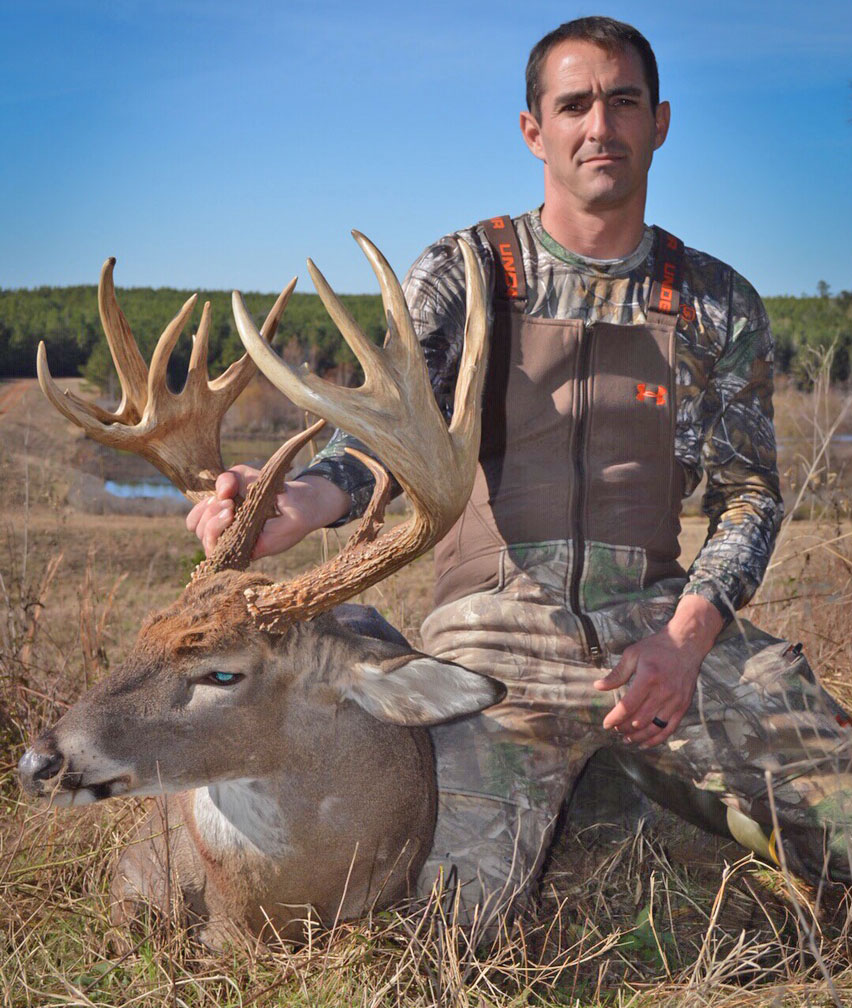 The buck was impressive, tipping the scales at 195 pounds with a rack that was amazing. He had a total of 12 points, palmated on both sides with a cluster on one side. The inside spread was 19 ¾ inches and the buck was unofficially scored at 186 3/8 inches.