When a cold front made its way south on Nov. 5, Zachary Gunter, 27, left his job early where he works as a production operator for a chemical company in El Dorado, Ark., grabbed his gear and headed for his Ten Mile Hunting Club in Union Parish.

“With the change in weather, I felt I needed to get on a deer stand,” he said. “It takes about 30 minutes to drive from my home in El Dorado to the hunting club. Once I got there, I chose not to drive back to where my box stand was located so I walked the half mile back to the stand.”

There was a good reason for Gunter taking such care to not disturb the area where he planned to hunt. There was a big buck that was hanging out in the area and Gunter didn’t want to take a chance at spooking him.

The area of Union Parish where he hunts is near where he formerly lived in the village of Lillie. He joined Ten Mile Hunting Club eight or nine years ago and purchased a lifetime Louisiana hunting license. He lives close enough to the area that he can leave home and start deer hunting within an hour.

“I have killed some pretty good bucks since I’ve been a club member and this one really got my attention,” Gunter said. “I first started getting pictures of him on my trail camera three years ago. Last year he had improved significantly over the past year, and this year he was even bigger, especially in gaining extra antler mass.”

The box stand where Gunter hunts is set up on an old logging road where he has a corn feeder. He is looking at two other shooting lanes situated next to a six year old clear cut providing abundant thick cover with a hardwood bottom that borders the area.

“I got on my stand about 4:15 – this was before the time change – and it wasn’t long before some does came out to feed,” Gunter said. “I could hear what sounded like a buck chasing does out in front of me with another grunting in the thickets behind me. Suddenly, something spooked the does out front and they all took off around 5:30. Half an hour later, I looked down one of my shooting lanes and there stood a buck in the edge of the thicket.”

Gunter started getting nervous when he saw the beams of the rack gleaming in the late afternoon sun. Then the buck began walking directly toward him but suddenly stopped, reversed course and started back the way he had come.

“I was pretty shaken up, but before heading back in the thicket at some 120 yards, the buck turned slightly giving me a quartering away shot,” he said. “I shoot a Remington 700 7 mm and when I got him in my scope I hit the trigger. The buck dropped on the spot.” 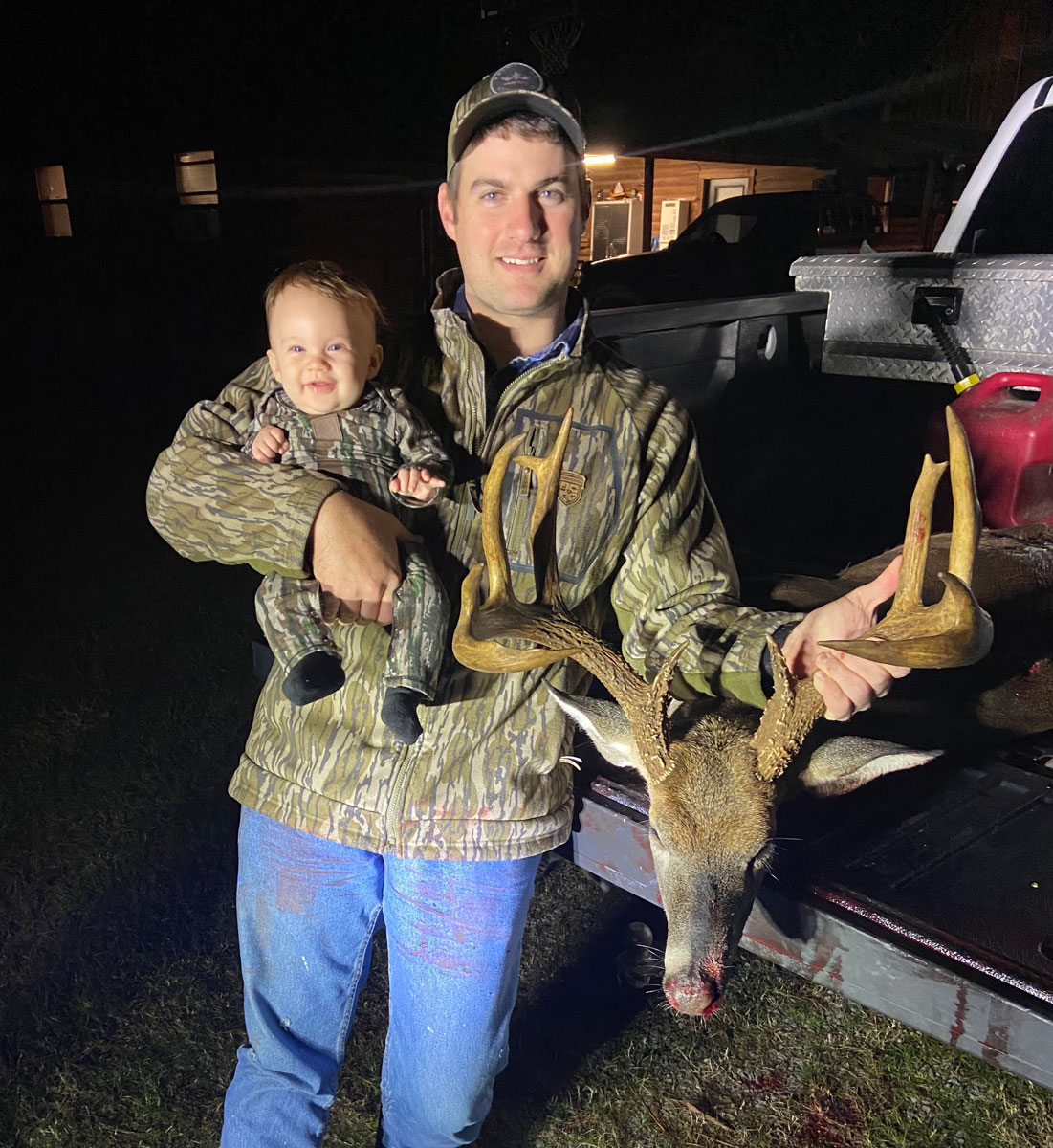 Gunter called his dad who was hunting on another stand across the road, he came to share his son’s success, load up the buck and haul him to the camp. The buck had a rack that was a main frame 10-point with an extra kicker point making him an 11-point. The deer weighed in at 175 pounds, had an inside spread of 18 inches with bases over 4 inches each. He was aged at 5 ½ years old and his rack was measured at 152 7/8 inches.

Although cold weather was hard to come by in 2021, Zachary Gunter was able to take advantage of a cold front to down his special buck.