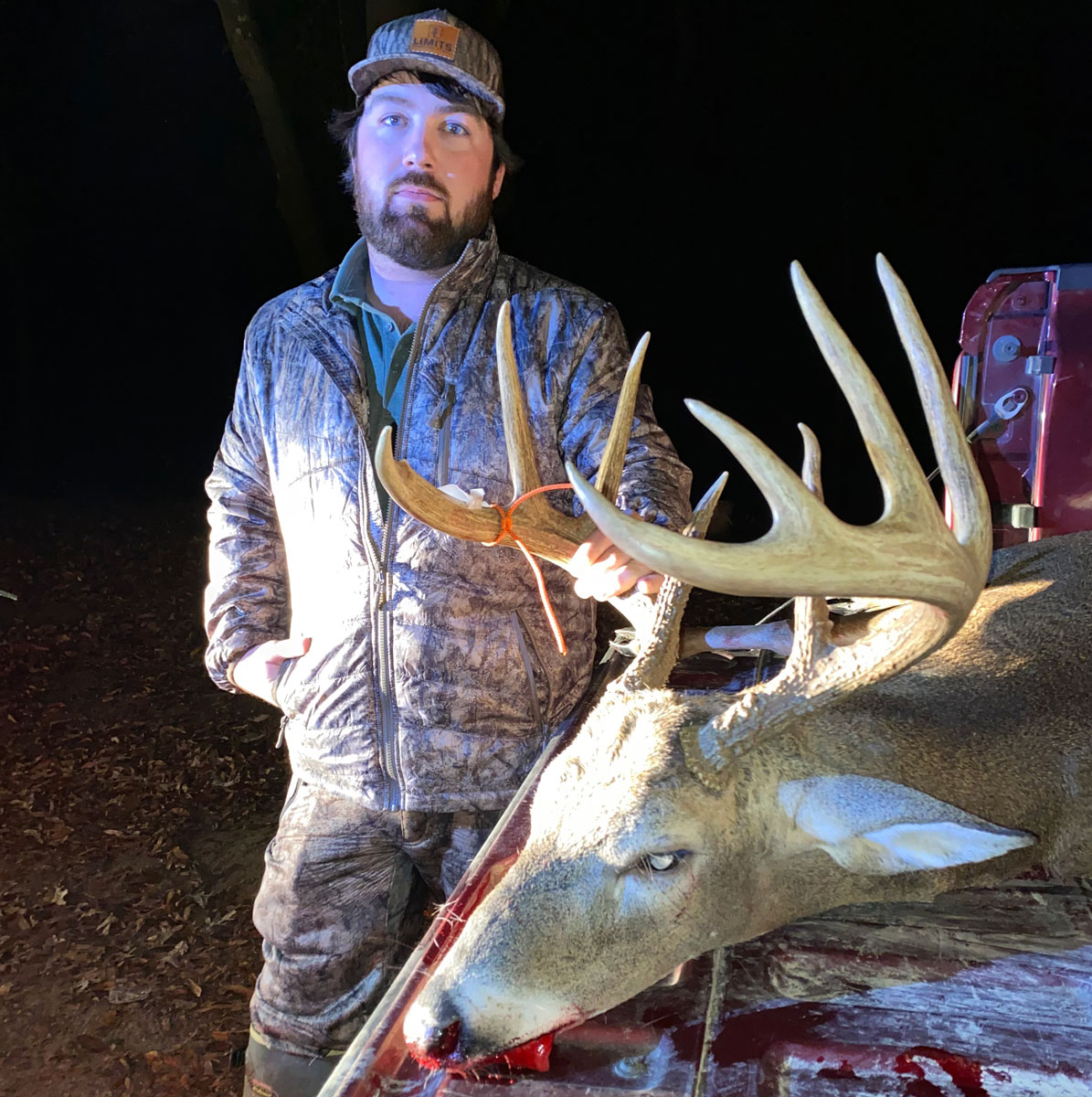 On Nov. 20, Rilyn Taylor, 27, downed a fine buck in Missouri, a 10-point that measured 146 inches. Twelve days later on Dec. 2, Taylor drove to his lease, six miles from his Winnsboro home, to put the pop on a 9-point Franklin Parish buck that scored 152 6/8 inches.

“It’s interesting that even though I got a fine buck on my trip to Missouri, I came home to get a bigger one,” Taylor said.

Taylor, who does shut-down work for refineries, belongs to a private hunting club of some 80 acres to which he and a few friends are members. He had a trail cam photo of a big buck last year and this year, he and his brother each had a single photo of the buck, both taken at night. A friend on another lease had a photo of the buck three miles from the club to which Taylor belongs.

“The land we hunt is mostly 20-year-old CRP land that is very thick,” Taylor said. “I have cleared a food plot in the middle of the CRP where I have installed a big ladder stand giving me a good view of the food plot. I felt like a good buck would likely be hanging out in the thick stuff and hopefully would come out in daylight onto my cleared plot.” 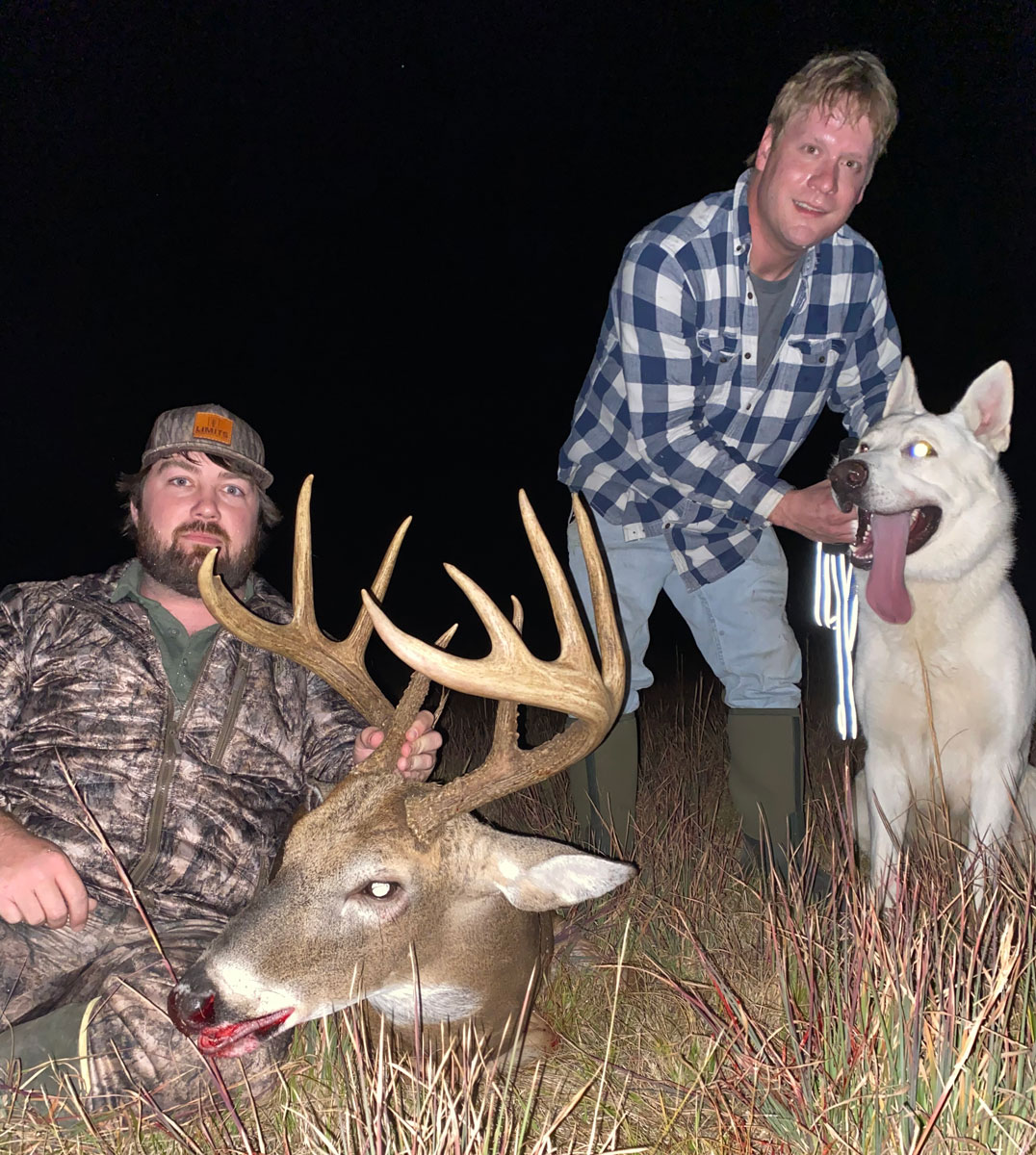 Ascending his ladder stand around 4 p.m. the afternoon of Dec. 2, Taylor was able to communicate via text with his brother who was on another stand on the property.

“I hadn’t seen anything and it was starting to get late, so around 4:40 I picked up my grunt call and hit it a couple of licks,” he said. “I thought I could hear something moving in the CRP and then at 5:23, I looked down the lane and at about 100 yards, a buck stepped out. I wasn’t sure just how big he was until he raised his head. I could see it was a good buck so I raised my gun, a Mossberg 6.5 PRC, and as the deer was quartering to me, I aimed just in front of the shoulder and hit the trigger. When I shot, he wheeled, turned and ran back into the CRP.”

Calling his brother to explain what had just happened, Taylor waited until he got there and they went down to where the deer was standing when he was shot. A thorough search revealed only a bit of hair but no blood at all.

“My brother called a friend, Dustin Brown, who has a blood trailing dog, a German Shepard named ‘Walker’, and he came with the dog to begin the search,” Taylor said. “At first the dog had trouble finding a trail where the buck had run, but soon got on a scent and in a minute Dustin yelled that he had found my buck. I was some kinda relieved when he hollered.”

Bringing the buck in

The buck had run through the thick CRP and had died on a hay field just on the other side. Fortunately, Taylor could drive his 4-wheeler around to near the hay field, avoiding having to drag the buck back through the CRP.

The buck sported a 9-point rack with an inside spread of 16 ¼ inches. The rack was massive with bases nearly 5 inches each with similar measurements at each point up the rack. The buck, aged at 4 ½ years, tipped the scales at 220 pounds. Taylor’s taxidermist measured the rack at 152 6/8 inches.

“After I shot, I called my mom and dad, who came to celebrate with me,” Taylor said. “It was sort of a family event.”