When a big buck steps out of the weeds, a buck whose coloration is mostly white, one would tend to think of it as a “ghost” buck. This is what happened to 35-year-old Justin Lyons of DeQuincy when the buck he had been after for five years stepped out within 10 yards of his box stand in Calcasieu Parish on Sunday morning, Oct. 30.

The unusually-colored buck had been on Lyons’ radar for at least five years; that’s when he saw an image of the buck on his trail camera.

“I belong to a 4,000 acre hunting club in Calcasieu Parish and the buck displaying the piebald colorations first showed up as a 4-point in 2015. My dad, another friend on the club and I decided to keep an eye on him to see what he might eventually mature into,” said Lyons, a heavy equipment operator.

The buck steadily grew over the next five years, and three years ago developed an impressive rack of 10 points. 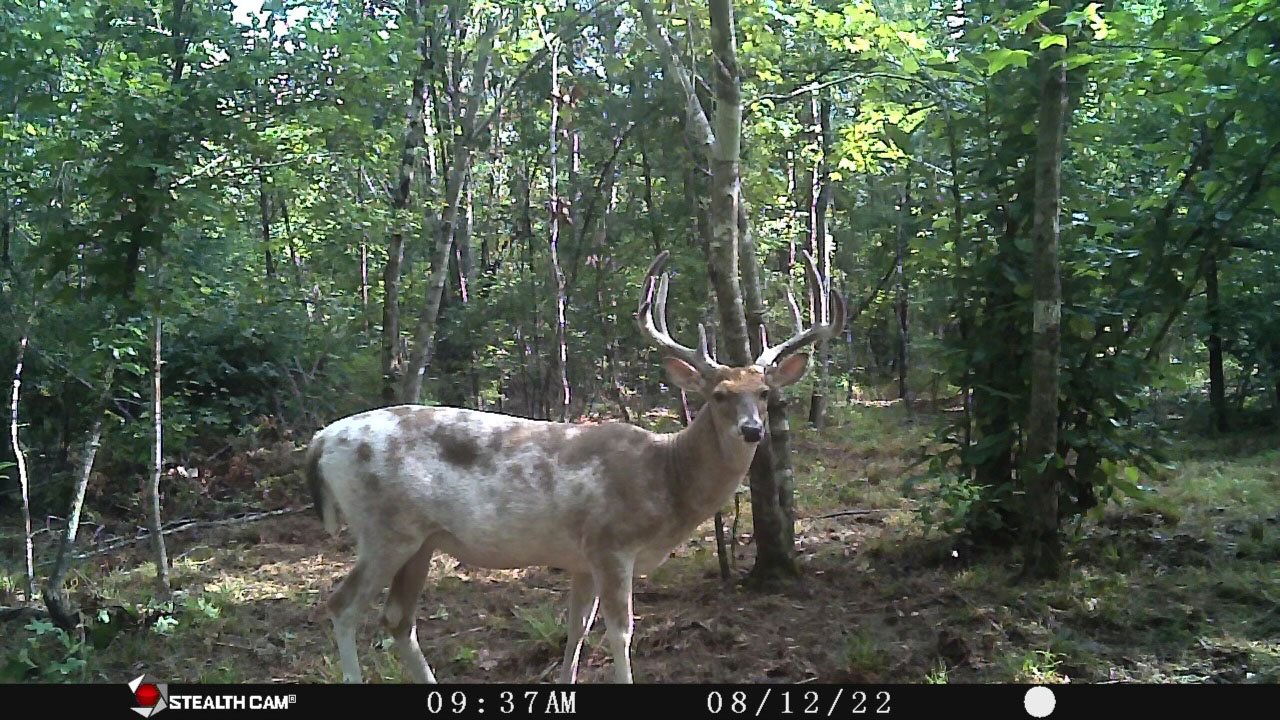 “A friend hunting on the other side of our lease had a trail cam photo of him after he had shed his antlers. I had been looking for him on my cameras this season but he seemed to have disappeared,” Lyons said. “I have been using my saddle stand so I could be mobile and move around the lease where I hoped I would find where he was hanging out but he just vanished.”

Early on Sunday morning, Oct. 30, Lyons had planned to hunt out of his saddle stand, but before heading out decided to check his trail cam photos.

“I had a photo of a small 10-point and a 4-point on the camera and had sent the pictures to my dad,” he said. “When I checked on the next picture, there he stood; he was next to my box stand at 4:09 that morning so I knew that’s where I would be hunting.

“I got there before daylight, parking my truck farther away than I usually do, sprayed myself with cover scent and attached a drag rag with attraction scent to my boot. I walked as quietly as I could to make my way to the box stand because I knew the buck would still be in the area, probably nearby.”

The box stand has a feeder out front and is bordered by a four-year-old pine plantation on the right and a patch of heavy weeds to the left. Lyons got quietly settled into his stand, opening windows on the front and rear of the stand but leaving a window to the left closed thinking if the buck showed up he would come from a different direction.

“About 25 minutes after settling in, a doe came out within 10 yards of my blind and I noticed she seemed particularly nervous and on full alert,” he said. “I decided to ease my rifle, a Weatherby .308, to the shooting ledge. I looked to the left where the window was closed and saw nothing. I then saw that the doe was leaving and when I looked back to the left, there he stood, not 10 yards from me, and I was looking at him through a closed window.”

The buck stood there without moving for what seemed to Lyons to be nearly 10 minutes. He was having doubts about whether he’d have a chance at the buck so decided to at least ease his phone up and get a photo of the deer through the window.

“The buck was on full alert, would look first this way and that and then stared at the blind,” Lyons said. “After several minutes, he finally took one step and his body language indicated he was beginning to settle down. Finally, he switched his tail and I knew he was about to move. When the buck cleared the corner of the blind, I got on him and hit the trigger. He took off and ran about 20 yards when I saw him crash down.”

What was his reaction after seeing the unusual buck he had been after for years piled up on the ground? “I broke down and cried,” he said.

Lyons’ dad was hunting on another stand and after texting him, he soon joined Lyons to celebrate.

“Before dad got there, I walked down to the fallen buck and just laid down on him giving thanks for the opportunity of getting such an unusual buck I had been after so long,” he said.

“I just want to show folks what can happen if you let young deer walk,” Lyons said. “To see this buck grow from a 4-point five years ago to a fine 10-point today just proves the point.”

Adding a second station to your fishing boat will help you catch more fish. […]