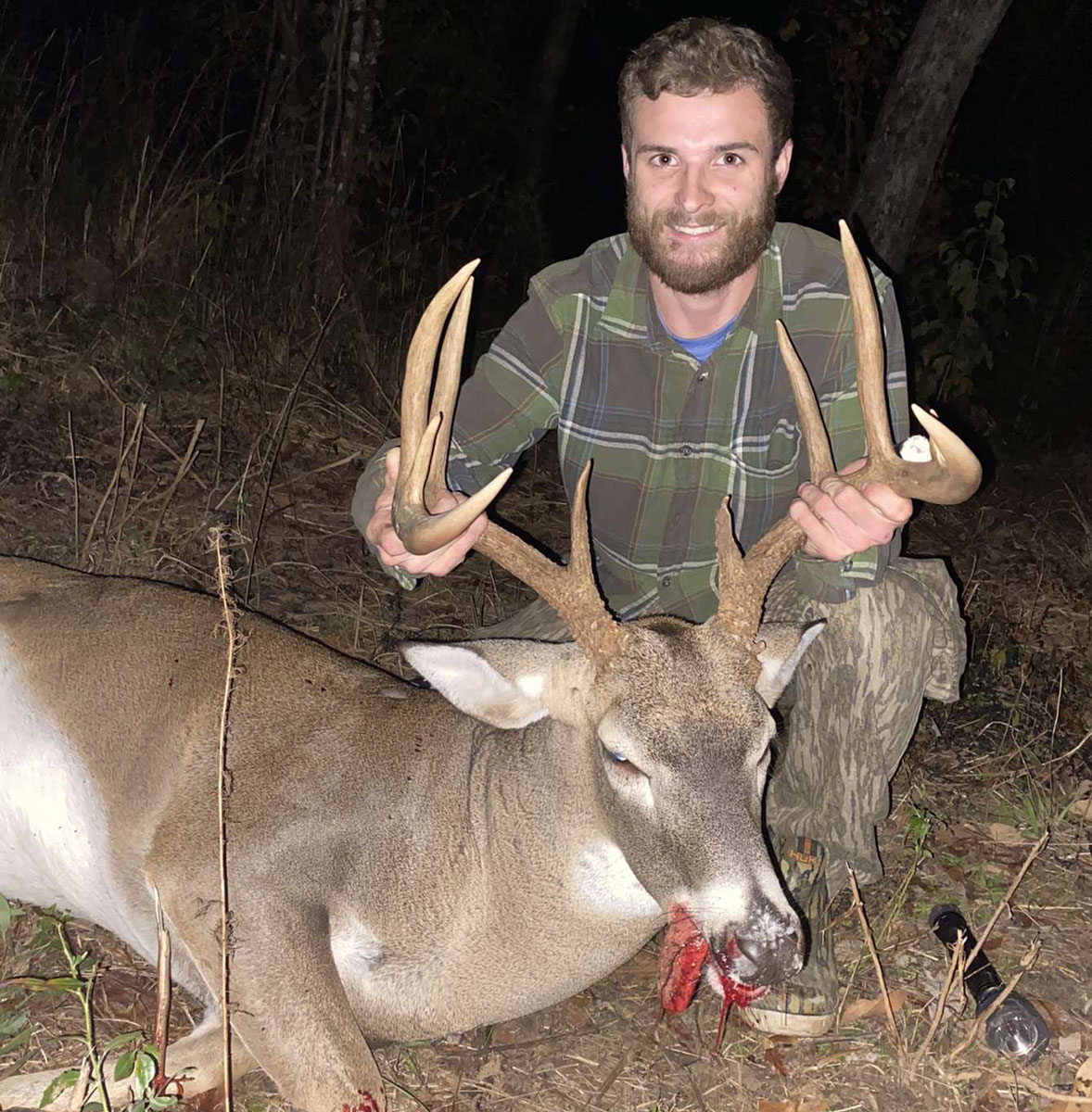 If ever there was a buck that earned the name given him, it was a big 10-point Winn Parish buck that rightly earned the name of “Mouse”; he had gotten good at playing cat and mouse games with 20-year-old Everitt “Rett” Blake.

“For the last couple of years I had this buck on camera, and early on he had a 9-point rack,” Blake said. “He disappeared for awhile and I figured another hunter had got him on another club. Then on opening day of bow season this year, things started to happen.

Since the buck had disappeared, Blake started hunting another buck on the opposite side of the lease, a 1500 acre plot leased by his family, a club they call Dead End Hunting club. It was about then when the “cat and mouse” games kicked in.

“I was hunting the other buck when I checked my camera and there he stood, right next to my blind I usually hunt,” Blake said. “Mouse who was sporting 10 points this year, won the first round.”

The second weekend of bow season, Blake got on his stand that afternoon where he had seen the buck on camera and sure enough, he stepped out. However, it was late, there were three or four other deer around his stand and he knew if he tried to draw his bow, the deer would spot the movement and the game would be over.

“By the time the other deer finally moved off, it had gotten so late I couldn’t see my pins on my bow well enough so I had to hold off,” Blake said. “I sat in the stand watching him feed on acorns until he finally left. I didn’t leave my stand until 8:30 that night.”

Not to worry, Blake knew that his stand sitting among a grove of acorn-producing white oaks would likely keep the buck in the area so he decided to sneak in long before daylight the next day.

“I got within 100 yards of my stand early that morning, decided to check my camera to be sure no other deer were there but there Mouse stood eating acorns under my stand. I had a slight problem because when I got out of my stand the night before, I had left my bow hanging in the tree next to my saddle stand. Here I stood with the buck under my stand and my bow up in the tree. Mouse had beat me again,” Blake lamented.

During the first week of primitive firearms season, Blake was on his stand when the buck showed up. However, it was late and there was another 8-point in the area he didn’t want to shoot and he couldn’t really tell which deer this was so he held off.

“I went back to my truck at dark, checked his camera and sure enough, the buck I had passed on was Mouse,” he said.

Regular gun season opened Oct. 29, but Blake was not able to make it to his stand because of work conflicts; he works as an electrician. He was finally able to hunt on the afternoon of Nov. 2 and because of such bad luck with hunting out of his saddle stand, he decided to try his box stand.

“It was about 4:15 before I could get to my stand and decided to just put out feed and maybe try him the next day,” Blake said. “I left my gun in the truck but halfway to the stand, I decided that may not be a smart move so I went back and got my 30.06 rifle and climbed in the stand at 5:35.

“An hour later, Mouse stepped out at around 100 yards. He was quartering to me so I took the shot and dropped him on the spot.”

The buck was a fine specimen with 10 points along with two small kickers. Inside spread was 16 inches with bases 4 and 5 inches each. Main beams were 22 and 23 inches. The buck was estimated to be 4 ½ years old and weighed in at 205 pounds. The rack was measured at 151 inches.

November 18, 2022 Joe Macaluso Columns, Down on the Dock, Hunting

With all the outdoor items out there for sportsmen, getting a thumbs up on just the right Christmas gift isn’t easy. […]