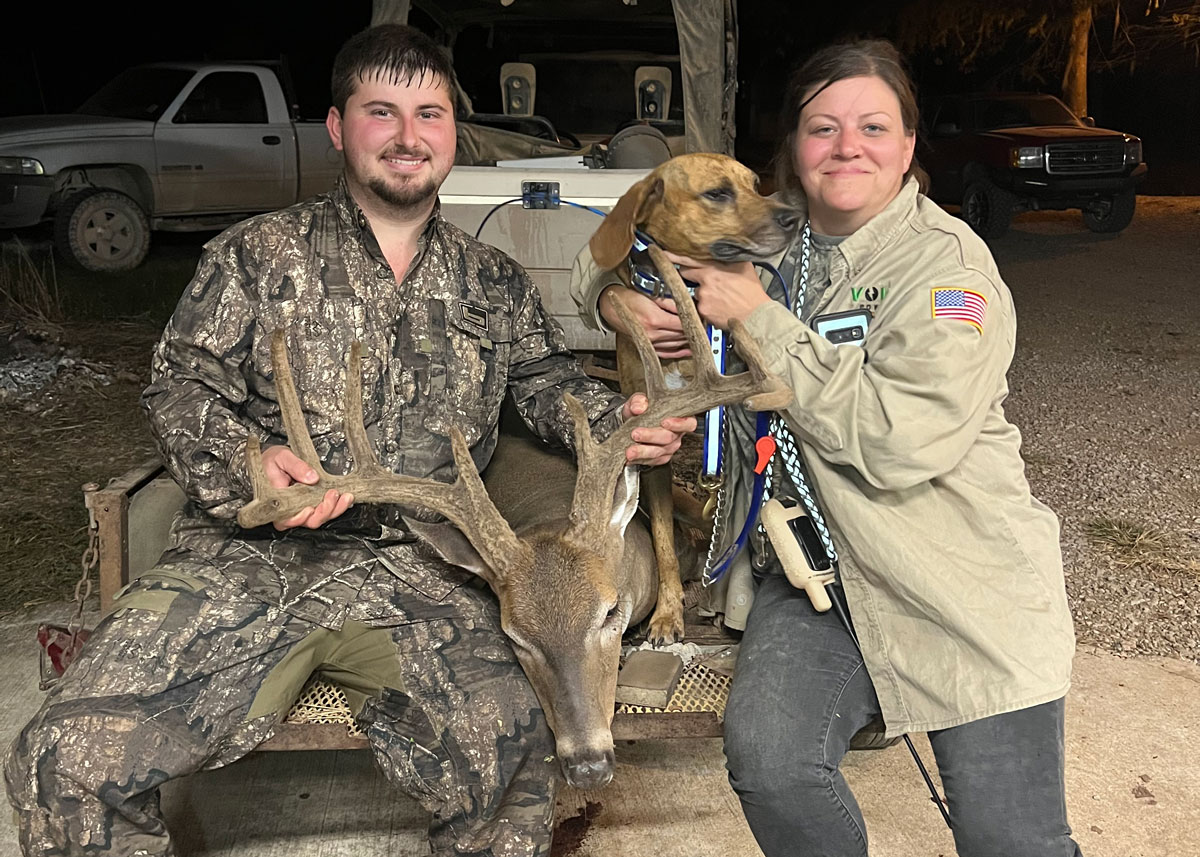 The majority of bucks in Louisiana begin losing their velvet around Labor Day each year. Most do, but not all, at least the impressive 11-point buck Garrett Thibodeaux downed with his Wicked Ridge crossbow on Oct. 16 was still in full velvet.

Thibodeaux, 23, who lives in the village of Echo, works as Operations Manager for Big John’s Meat Market in Echo. He holds membership in the 7000 acre Grand Lake Hunting Club in Avoyelles Parish, a club located just south of Lake Ophelia National Wildlife Refuge near Marksville.

“I had this buck on trail camera this year and last season,” Thibodeaux said. “I actually got a shot at him with my compound bow and missed. It was just luck that he gave me another chance this season.”

By mid-October, the weather should be cooling down nicely. However, the afternoon of Oct. 16, it was anything but cool.

“When I got in my box stand that afternoon around 3:00, thank goodness I brought along my Thermacell because it was hot and the mosquitos were really bad,” he said.

Scattering soy beans out front of his stand, Thibodeaux was soon seeing deer come out to munch on the beans.

“I hadn’t been in the stand long before two does and a spike came out, ate some beans and hung around awhile,” he said. “The deer would eat for a while, then leave and return; it was like they were really comfortable hanging around the area. They finally left for good around 6:00 and then at about 6:30, I started hearing deer walking in the woods near my stand. I didn’t know if it was the three that had been there off and on, but the three deer that stepped out were two small bucks and the big velvet buck I had been after.”

Because the two smaller bucks were too near his stand to allow him time to pick up his crossbow, he had to wait until they moved behind some trees before picking it up and drawing a bead on the velvet buck.

“Once I got my bow up, I got on the big buck and hit the trigger,” Thibodeaux said. “My arrows have lighted nocks and I could see that I hit the buck a little high. My stand is pretty high and I’m shooting down, but the point of entry was a little higher than I wanted.”

At the shot, the buck hit the ground but was trying to get up as Thibodeaux feverishly tried to get the bow ready for another arrow. Before he could reload, the buck managed to get up and ran another 50 yards before falling again.

“I got out of my stand to try to get another shot off but before I could, the buck got up and took off running,” he said. “My heart nearly stopped because I was afraid I had really messed up and was going to lose the biggest buck I ever shot.

Thibodeaux called his dad who suggested he come back to camp and wait awhile to give the deer time to expire.

“After getting back to the camp, we knew of a lady, Brandi Lewis, who has a really good blood trailing dog named ‘Gator’ that has helped in the recovery of several deer,” Thibodeaux said. “She agreed to come and got there about 9:15.

“We went to the stand and to the spot where the deer was standing when I shot and found a little blood. I knew which way he had run, so about 100 yards further I found my arrow covered in blood. From that spot onward, there was plenty of blood once the arrow had fallen out and all we had to do was follow the dog to my buck that managed to run probably 400 yards.”

The velvet rack contained 11 points, inside spread was an impressive 22 6/8 inches, bases were around 6 inches each with main beams 23 and 24 inches. The buck was estimated to be 5 ½ years old weighed in at 236 pounds. His rack measured 153 7/8 inches of velvet-covered mass.