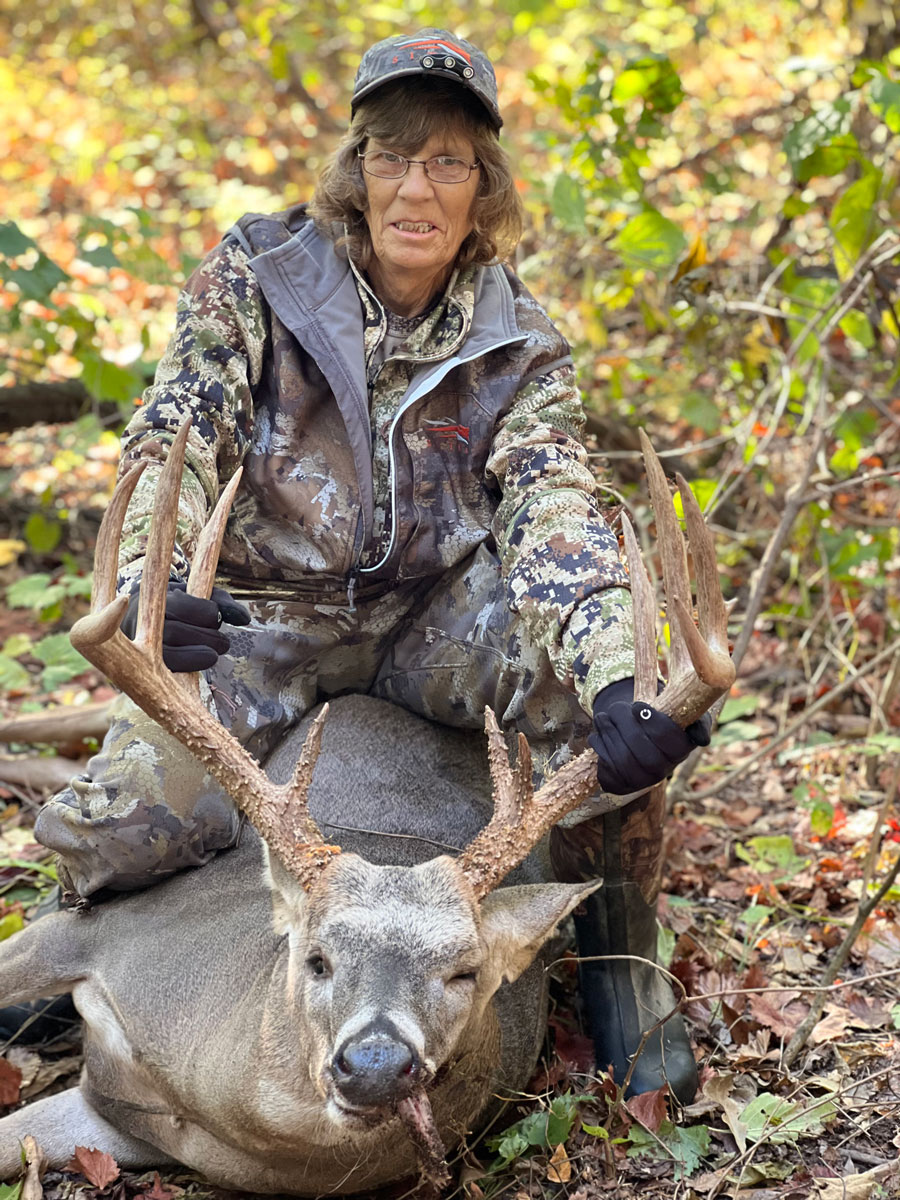 What do you do this time of year when you work daylight to dark as owner of a convenience store and you also are an avid deer hunter? Crickett Collins who lives in Gilbert is just such a person. She is serious about the nature of having a successful business but sometimes working at the store cramps her style, especially when she would rather be sitting on her deer stand.

“My husband Galen and I own a 40-acre tract in Morehouse Parish where we hunt every chance we get,” Collins said. “After bow season opened, I was getting fidgety and really wanted to be sitting in my deer stand. So on Friday, Oct. 14, I left the store at 3:00 and drove the hour and 10 minutes to our land.”

There was one particular buck that had shown up on her game cameras and it was impressive enough she named him “Hercules.”

“I got to the property; my daughter and granddaughter joined me at the camp we have there and I got my feeders going and put out some corn and persimmon rice bran 50 yards from my box stand,” Collins said. “That’s the distance I feel comfortable with my Raven crossbow.”

The weather that afternoon was quite warm when she climbed aboard at 5 p.m. She sat until 7 p.m. without seeing a thing.

“I was getting hot and sweaty and the mosquitoes had started bothering me and I had decided that I’d go back to the camp and wait until the next morning as a cool front was supposed to come in that night,” Collins said. “I had started getting my gear together when I looked down my middle lane and saw something move. Hercules stepped out next to the feed I had on the ground. He was broadside at 50 yards and I got my pin on him and hit the trigger.”

The buck did something that caused her to have immediate concern because at the shot, the buck turned and went back the exact same trail he had come in on.

“That worried me because I’ve shot a lot of deer and they always take off the opposite way they come in; I had never had one do this,” she said.

Stepping down from her stand, Collins walked down to where the deer was standing and didn’t see any blood or evidence she had hit the deer.

“I walked back the 200 yards to the camp and told my daughter what I’d done,” she said. “I decided since it was dark by now to just wait until morning to begin to search. We went and ate supper, came back to the camp and I sat up all night in my recliner with my hunting clothes still on; there was no way I could sleep.”

The next morning, she went back to her stand to wait for her daughter, granddaughter and family friend, Colby, to come help her look for the deer.

“The got there around 8:00,” Collins said. “The 40 acres is divided basically with 20 acres being big woods with the other 20 being CRP land. We spread out and began looking and finally found a drop of blood and then quite a bit of blood. Colby was looking in the big woods while we were following a trail through the CRP. Colby called out that he had found blood, I took a couple of steps and saw horns sticking up. The buck had only traveled about 50 yards from where I shot him.”

The buck sported a rack of 13 points, had an inside spread of 19 inches, bases were over 5 inches each with main beams 22 inches. Estimated weight was 250 pounds and the deer was believed to be 5 ½ years old. The buck was taken to Simmons Sporting Goods in Bastrop to be entered in that store’s Big Buck contest and was scored at 168 2/8 inches.

“When you own a convenience store and work 12 hours a day, you have to get away,” Collins said, “and getting to sit on my stand is my getaway.”