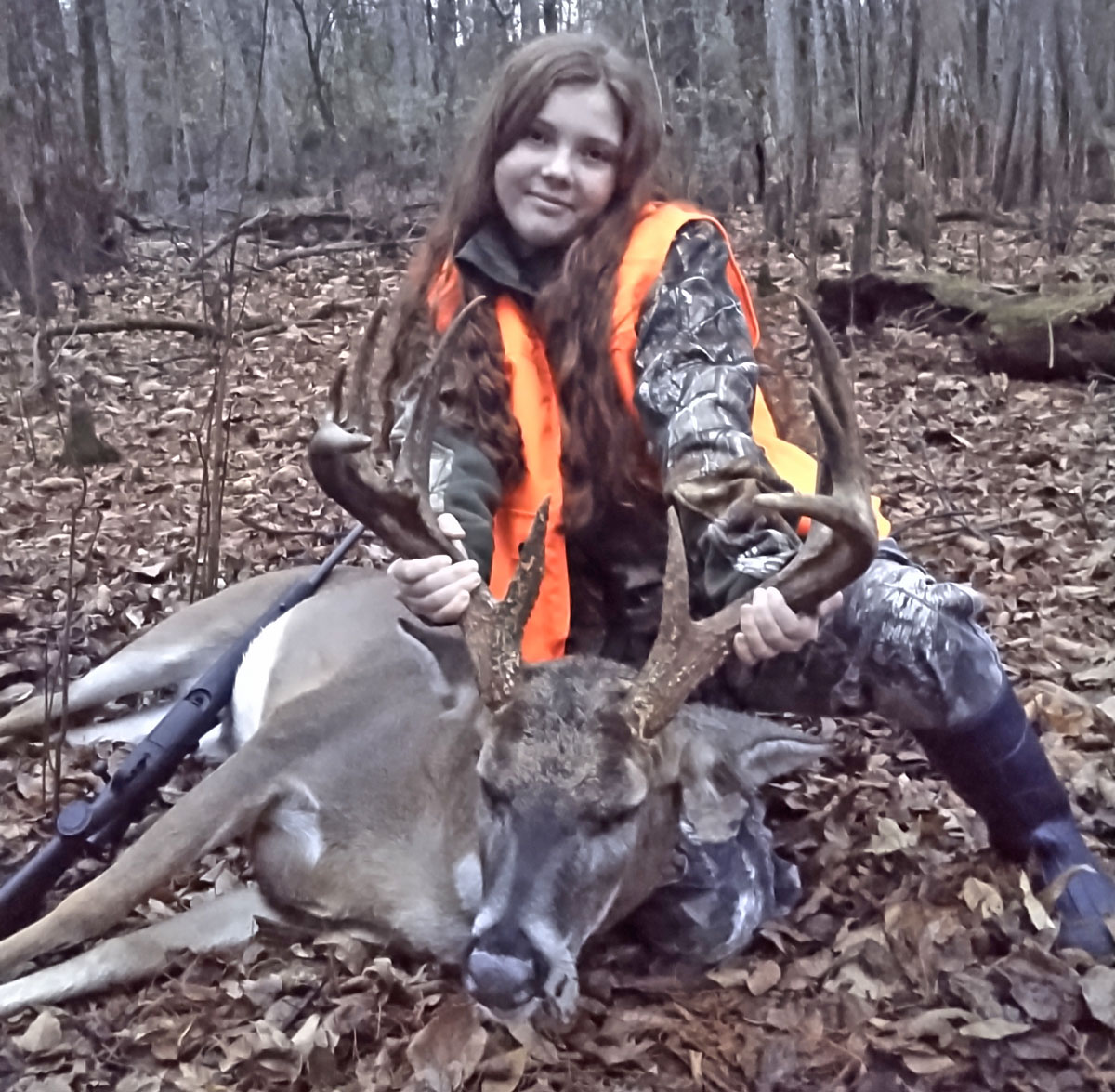 What are the chances of me winning a multi-million dollar lottery? Infinitesimal. What are the chances of a 15-year-old high school sophomore getting selected for a lottery deer hunt and proceeding to down the biggest buck ever taken on that area? Not likely, but Kaitlyn Bolton got it done on the afternoon of Dec. 11.

Annual deer hunts for young hunters are selected by lottery on a unique wildlife management area in Richland Parish. In 1990, Floy Ward McElroy donated her 681-acre property to the Louisiana Department of Wildlife and Fisheries with the requirement that she retain use of the property for cattle production the remainder of her life. She passed away in November 2000.

The primary stipulation of Mrs. McElroy’s donation was the mandate that the wildlife management area honoring her name would be used for outdoor education and youth hunting activities.

Kaitlyn Bolton, a sophomore at Mangham High School, was excited when she learned her name had been selected for this season’s lottery hunt on the McElroy management area, a hunt planned for the weekend of Dec. 11. The property features pastures where hardwood seedlings have been planted. The area also has scattered hardwood sloughs and backwater areas along the Boeuf River.

“My dad and I got on the stand they had selected for me that morning and saw a couple of does and a little 3-point buck,” Kaitlyn said. “We went back at around 2:00 that afternoon and for the first couple of hours we didn’t see anything.”

Squirrels cause a ruckus

Squirrels had been making rustling noise in the woods as they moved about and about 4:15, Kaitlyn heard what she thought was another squirrel.

“I heard some noises like twigs breaking in the woods and I assumed I was hearing squirrels again,” she said. “I looked over that way and saw something moving; I realized what I was looking at was a big set of antlers moving up and down. I whispered to my dad, ‘there’s a buck!’ He picked up his binoculars and told me to get my gun up and get ready.”

Easing her gun out the window, the hunt was almost busted when a doe stepped out of the woods and stopped eight steps from where Kaitlyn and her dad were sitting.

“Daddy whispered ‘don’t move, don’t blink, don’t breathe’ and that was so hard for me because I was so nervous,” Kaitlyn said. “The doe hopped back into the woods and daddy told me to be looking for the buck to step out because he was probably interested in that doe.”

The buck stepped out of the woods at 60 yards onto the food plot out from the stand. Kaitlyn got him in the scope on her Savage .308, hit the trigger and the buck ran some 25 yards before she watched him fall. 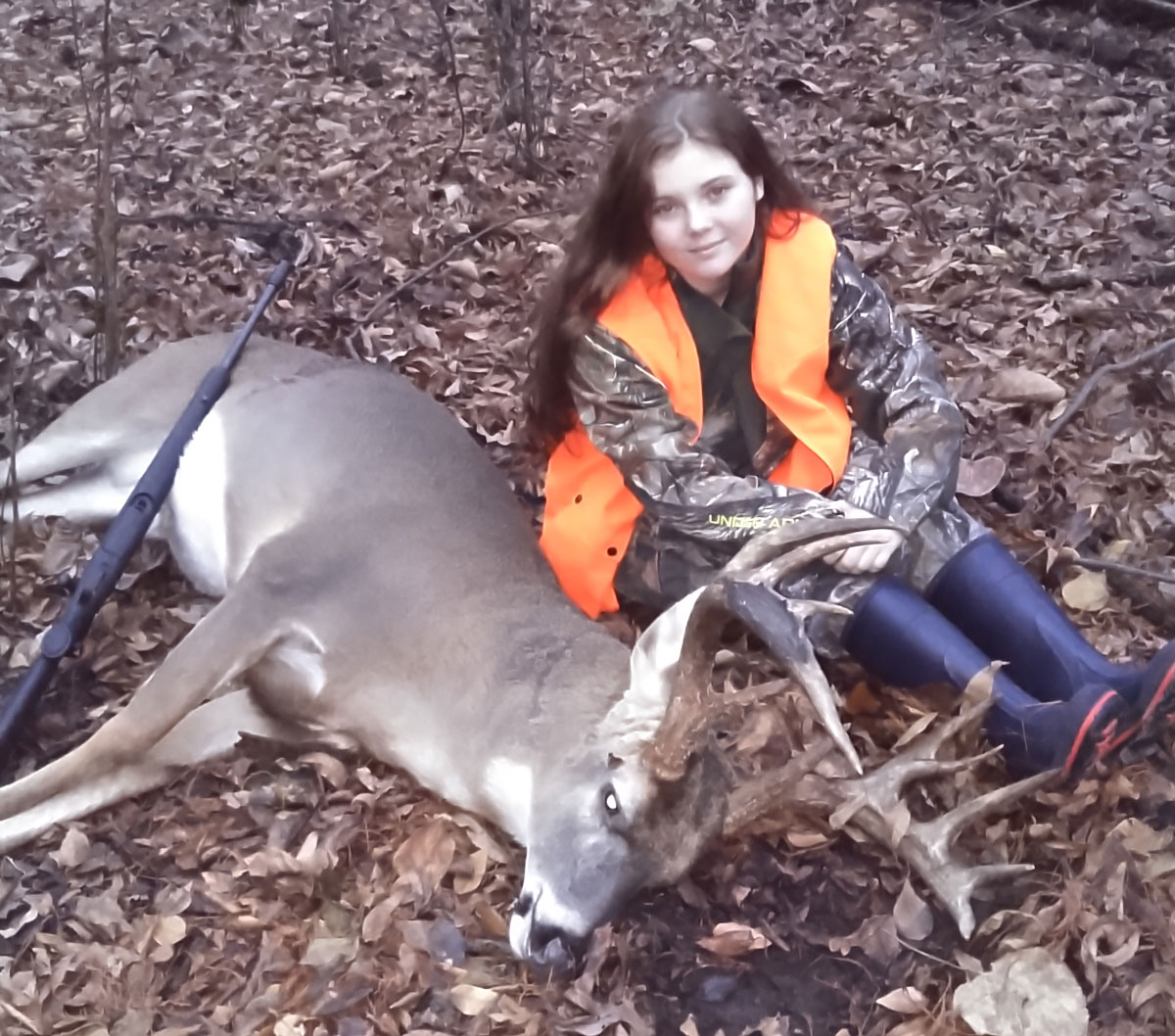 The big bodied deer was aged at 6 ½ years, weighed 238 pounds and sported a rack containing 13 points, 11 of which were scorable. Inside spread was 16 5/8 inches with bases over 5 inches with a total of over 40 inches of mass. Main beams were 23 inches each. The rack was scored by official Buckmaster’s scorer Cecil Reddick at 159 inches.

“The folks there with Wildlife and Fisheries told me that this was the biggest buck this area has produced,” Kaitlyn said. “It was so exciting to have this happen to me with my daddy there to experience it with me.”