Opening day to hunt deer using primitive firearms in Area 3 was Oct. 9. Kody Hickman, a 23-year-old logger from Hornbeck, planned to go hunting that day and pondered about what weapon he wanted to take on his stand.

“After thinking about it for awhile,” Hickman said, “I decided to take my bow because I really prefer to bow hunt rather than gun hunt.”

Hickman only hunts public land and one of his favorite areas to hunt is Peason Ridge Wildlife Management Area, a 74,309 acre tract that touches three parishes, Sabine, Natchitoches and Vernon.

“I hunt the Vernon Parish portion of the area mainly because it’s only about 15 minutes from my house,” Hickman noted.

Peason Ridge is owned by the U.S. Army that also owns the Fort Polk Wildlife Management Area, with both areas subject to restrictions when Army maneuvers are going on. Rolling pine hills, meandering streams dotted with acorn producing oaks dominate on Peason Ridge.

On the morning of Oct. 9, Hickman left his rifle in the corner and instead, picked up his Martin Alien bow and quiver of 340 Gold Tip arrows fitted with 110 grain Hatchet broadheads.

“I found a long draw where oaks were growing, trees that were producing acorns I knew deer liked,” Hickman said. “Taking my Summit climbing stand, I climbed a big pine some 30 feet and waited to see if something might show up.”

Never using trail cameras on the area, Hickman was just taking a chance on the location he chose being a good spot because of the availability of plenty of mast deer love and any deer he saw would be one he had never seen before.

“I settled into my stand and hadn’t been there long when I saw movement down the draw and there stood this big buck 200 yards away,” he said. “I was mentally kicking myself for leaving my rifle standing in the corner because here I sat with my bow. All I could do was watch the deer standing there when I noticed something happening in my favor; the deer started feeding down the draw picking up acorns as he headed in my direction. I kept watching as the buck worked its way closer and closer and as it got within bow range I was able to draw. I released the arrow when the buck turned broadside at eight steps from my tree.”

Hickman’s aim was dead on as the buck only ran some 25 yards before collapsing and falling. 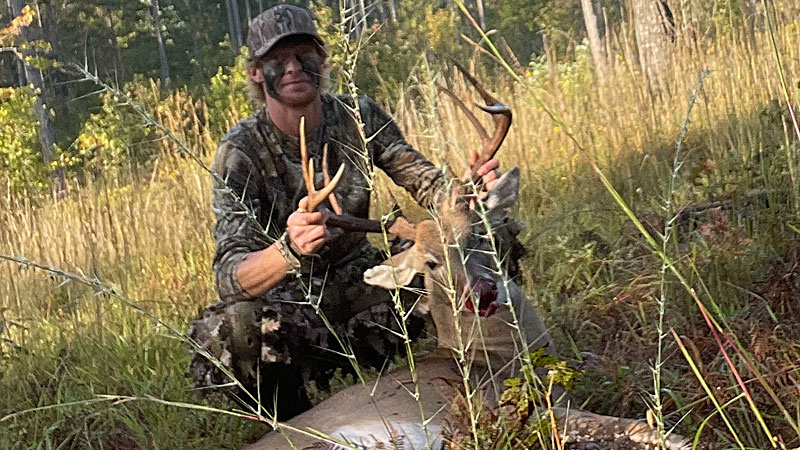 “I couldn’t believe my good luck to have a buck that size come all the way down the draw to where I was; it was like I had him on a string. It surely was nerve wracking though,” he said, “to have to wait him out.”

The 10-point buck weighed 184 pounds, was estimated to be 4 ½ years of age with an inside spread of 19 inches. Antler mass carried throughout the entire rack. The antlers were green scored at 153 4/8 inches.