A big doe was apparently quite hungry as she sauntered up to Joe Carpenter’s feeder on the Lower Place Hunting Club in Union Parish at 7 a.m. on Tuesday morning, Oct. 26. She stayed and fed for a solid hour.

“It was hard to believe that she stayed there and ate for that long,” Carpenter said. “I checked the time and realized that when 8 a.m. rolled around she was still there eating.”

Carpenter, age 19, is a student at Delta Community College and works in the lawn care business on the side. His home is in Farmerville.

Beginning around June of this year, a big buck had been showing up on trail cameras placed around the hunting club.

“We had been watching him on camera as he showed up periodically and knew he was a good buck,” Carpenter said. “I was just hopeful that he would show up when I was on my stand.”

A change in the weather

A cool front was approaching with temperatures a bit lower than the days before and Carpenter was hoping that with the change in weather, the deer might be moving better.

“I got into my box stand around 6:50 as it was just starting to get light,” he said. “My stand overlooks a feeder setting some 165 yards out front of the stand. My stand overlooks three lanes, the one with the feeder and two other ones.

“The feeder went off throwing corn at 7:00 and within a minute, here came a doe to the feed on the ground. While I watched her, I saw two other does cross the other two lanes. At 8:05, while the doe was still eating around the feeder, I looked up and saw a buck step out at 180 yards or so. The doe got nervous but kept feeding as the buck approached. He came up to her and bumped her to make her leave so he could begin feeding.”

Although the buck was in plain sight of Carpenter, there was a problem because the deer stood facing him for 10 minutes as he ate.

“I was getting more nervous all the time because I knew it was the big buck we had on camera and I was frustrated because he stood facing me for so long. Finally,” Carpenter said, “he turned broadside giving me a shot. 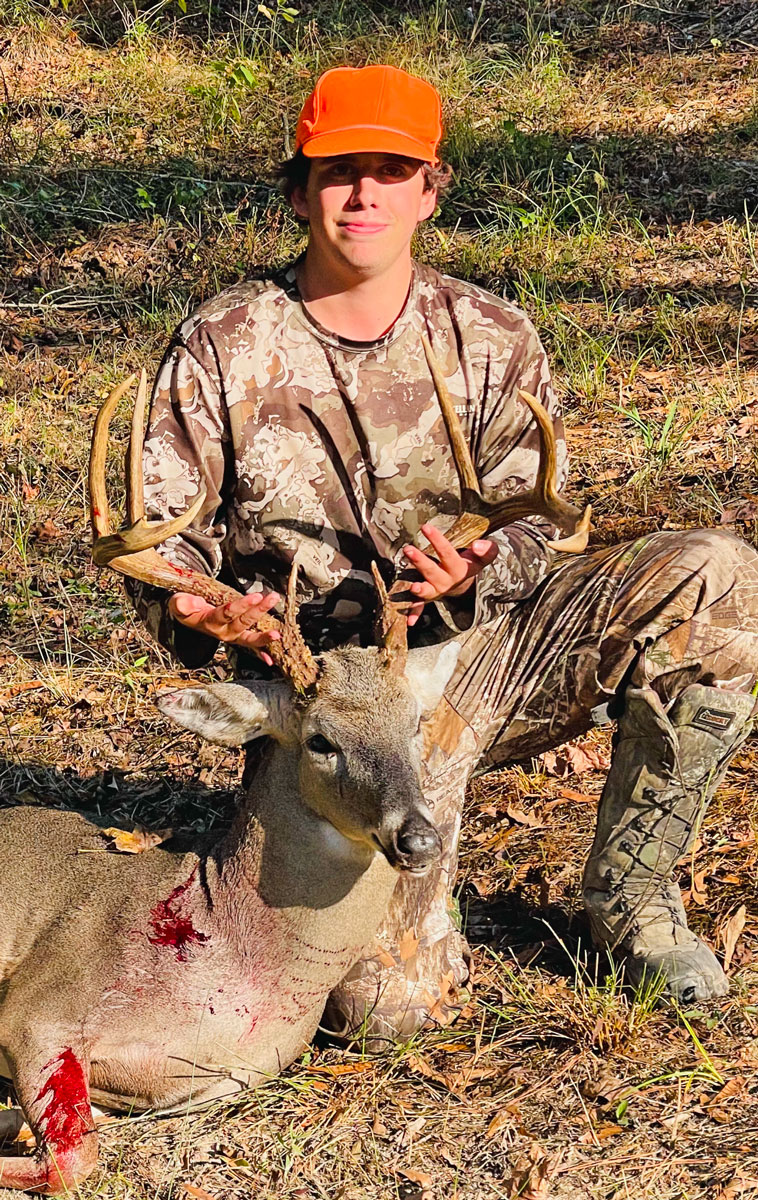 “I took the shot – I was using my aunt’s 35 Whelan – and the deer was obviously hit through the shoulders because he used his back legs to sort of crawl across the plot into the woods. So I called my dad and told him what I had shot.”

Carpenter’s dad told him to wait awhile to make sure the deer was down for good. He stayed in his stand an hour until his dad arrived.

“When dad got there, I got down and we walked down to where the deer was standing near the feeder,” Carpenter said. “Just before we got to the feeder, dad looked off to the left and saw the deer lying there and he had already died.”

The buck was impressive, sporting a 12-point rack with an inside spread of 20 3/8 inches and 27-inch main beams. Bases were 5 ½ inches with mass carrying throughout the rack. The buck, estimated to weigh 200 pounds, was green scored at 153 1/8 inches.

Jeanie Carpenter, Joe’s mom, added a comment about her son and his love for hunting, something he inherited from his late grandfather.

“My dad, Glen Post Jr., was an avid hunter,” she said, “and it makes me feel so good to see the tradition continuing. Dad would have been so proud of Joe’s accomplishment.”