Matt Downs proved persistence pays when he downed a huge trophy buck on his own land Saturday, Nov. 20. It was the culmination of seven straight days of hunting the bruiser. The deer was a huge 11 pointer that scored 147 5/8 inches and weighed 190 pounds.

That’s a good deer anywhere and especially in the Bossier Parish woods. And while most big deer are killed in the first few minutes of daylight in the morning or the last rays of light in the evening, this wall hanger was taken at 3:45 p.m.

“We got the first picture of that deer on a Friday night and I knew I better get after it if I wanted a chance to kill it,” Downs said. “My place is only about 60 acres and when a good one like that shows up, he may not be around long for a couple of reasons. He may wander off somewhere else or get shot by hunters on property to either side of me.”

But that wasn’t the case this time. Downs stayed on the deer for seven straight days until he finally got his shot. Fortunately, he owns his own business, Matt Downs Truck Repair, and he can slip off when he needs to.

“He was there two days in a row and then disappeared,” Downs said. “I feared the worst, but he showed up every night. I knew he was either chasing a doe or he found something there he liked, but I never saw him on the camera in the daylight. I finally decided to go out to the stand early in the afternoon and on Saturday, I got there, kicked off my boots and was just relaxing in the stand for a while. I really didn’t expect to see that deer, or any deer as a matter of fact.”

“I saw something off to the side and son of a gun, it was that big deer, 40 yards away from me and walking at a pretty good pace,” Downs said. “It took me a second to get my stuff together and I just knew he’d pop out in the shooting lane, but he didn’t. He came out in another spot and was about to jump my fence. He stopped for just a second and I shot. He fell right there.”

After he got his thoughts together, Downs realized that the big buck had been visiting the area during the day, but he was taking an angle through the woods that avoided all three of his cameras. And even though he was there in the daytime, he never went to the food pile except at night. 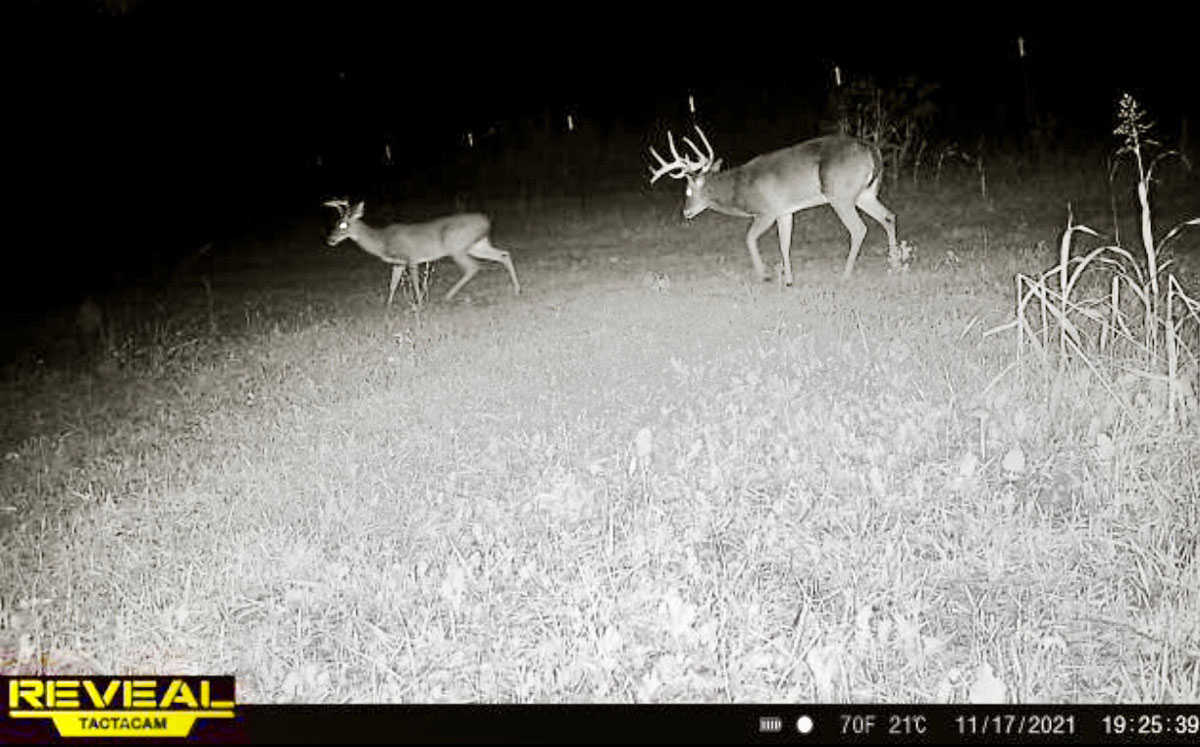 “You know, I think when you put out a pile of food during the season, it sets off an alarm to those older, smarter deer,” he said. “They are suspicious. They don’t want to associate with it during the day, except maybe in the rut. It just goes to show that you can’t always depend on deer cameras to give you the whole picture. And you can’t let your pre-conceived notions guide everything you do, or you might miss out on a big one like this.”

Downs probably hasn’t hunted in this spot for the last time, either. It’s to deer hunting what a honey hole is to fishing. He killed a 156-inch deer in the same spot last year. And it, too, was up in the morning.

“I was walking in to get on my stand and I looked across the pasture and saw a big buck and two does on the corner of the woods,” he said. “He saw me, too, but didn’t seem concerned. I eased out down the fence line and rested my gun on a fence post and shot. I missed. The deer just looked at me.”

He shot again. And missed. The deer still stayed, so he got low in the grass and worked his way closer. Finally he shot again free hand and hit the deer, but it was high and back. The deer fell, but was still moving around trying to leave. and he needed to shoot again. But he was out of bullets. So he sat his gun down, sprinted back to his other stand 300 yards away, got another bullet and sprinted back. When he got back, the deer had died. And Downs just laid down in the grass for a while himself, exhausted and out of adrenalin.

There’s more to the story, too. Downs’ wife Whitney had also hunted the two big bucks hard. And she was happy for him at first, but after this last one, “she turned a little sour at me,” he said. Who could blame her?

But in time, it appears there will be another one there at this deer hunting honey hole.