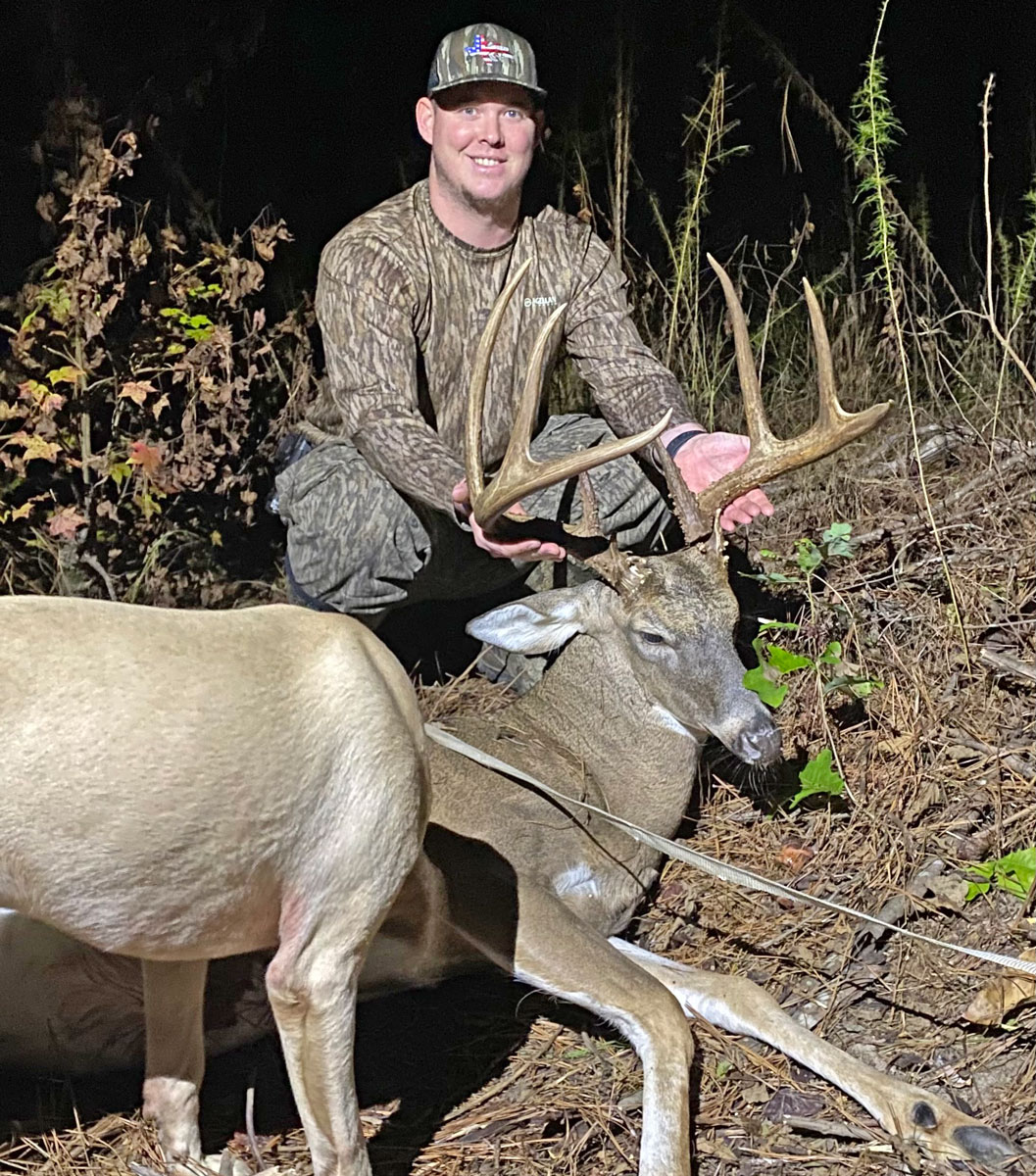 Cool fall weather has been a long time coming this year, as warmer than normal temperatures have hung on longer than in most years.

Carson Bolyer, 26, an employee for Fiberboard who lives in Minden, decided that 80 degree temperatures and hordes of hungry mosquitoes would not keep him from sitting on his deer stand the afternoon of Oct. 20.

“We have a six month old little one that requires plenty of attention for my wife and me so I have to prioritize my time for deer hunting,”  Bolyer said. “That afternoon seemed to be a good time for me to slip away a couple of hours to try for the big buck I had seen on my trail camera two days before.”

The property Bolyer hunts on is in northern Webster Parish, land his family has had leased for the past 20 years. The property consists of some 500 acres, but Bolyer restricts his attention to a particular 100 acre block within the property where he prefers to hunt.

“I had found this buck on my camera twice; first on Oct. 2 and then again on Oct. 18,” he said. “This is the reason I decided to put up with the heat and mosquitoes to see if he might show up that afternoon.” 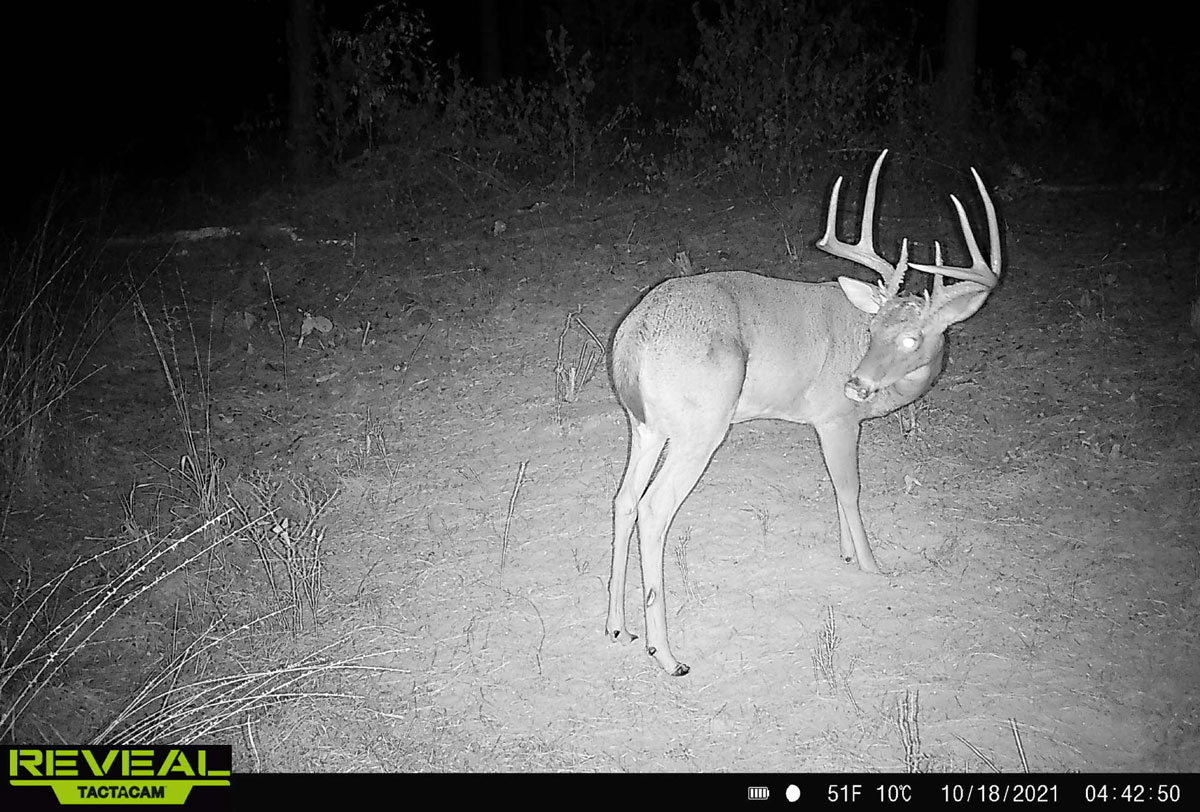 Climbing some 20 feet up a big tree along a fence row around 4:30 that afternoon, Bolyer settled in on his lock-on stand and turned on his Thermacell to keep the pesky mosquitoes at bay. With the temperature at 80 degrees, Bolyer said he was sweating and was hopeful his scent would not present a problem. However, he noted that the wind was right which gave him a measure of confidence.

“I don’t have food plots or feeders out where I hunt but I always take a coffee can of corn I scatter before getting in my stand. Before long,” he continued, “I could hear deer walking in the woods to my right but the trees prevented me from seeing what it was. I figured it was a doe and two yearlings I saw nearly every time I hunt that stand.”

Around 6:50, Bolyer heard a deer getting closer. From the way it was walking he thought it may be a buck, so he put his release on his bow and got ready. He expected the deer to go to the corn he had put out but instead, the deer came directly toward the tree where he sat.

“I happened to look down and this big buck stepped out 12 steps in front of me,” Bolyer said. “I was still sitting and knew if I stood it would alert the deer so I drew my bow. The deer heard it when I drew back and looked toward me just as I released my arrow; he was only 7 steps from my tree when I shot.” He shoots a Hoyt Carbon Matrix bow, Easton arrows with Swacker broadheads.

The deer bolted and ran back into the pines but Bolyer said he thought he heard him crash down.

“I called my wife and then my dad who lives not far from where I was hunting,” he said. “I waited a few minutes, got down and walked over to where he was standing and found my arrow with blood on the fletching. I waited for my dad to come, we followed a dim blood trail with just a few drops until it stopped. We decided to back out as it was already dark by now.”

Bolyer called a friend, Jacob White, to bring his blood trailing dog, Moco, and see if they could locate the buck.

“They got there around 10:30, Jacob released Moco and the dog made a bee-line in the direction the deer had run,” Bolyer said. “In just a minute, White called back, ‘here he is; I didn’t know you had shot a stud’!”

The deer had only run some 60 yards before expiring. 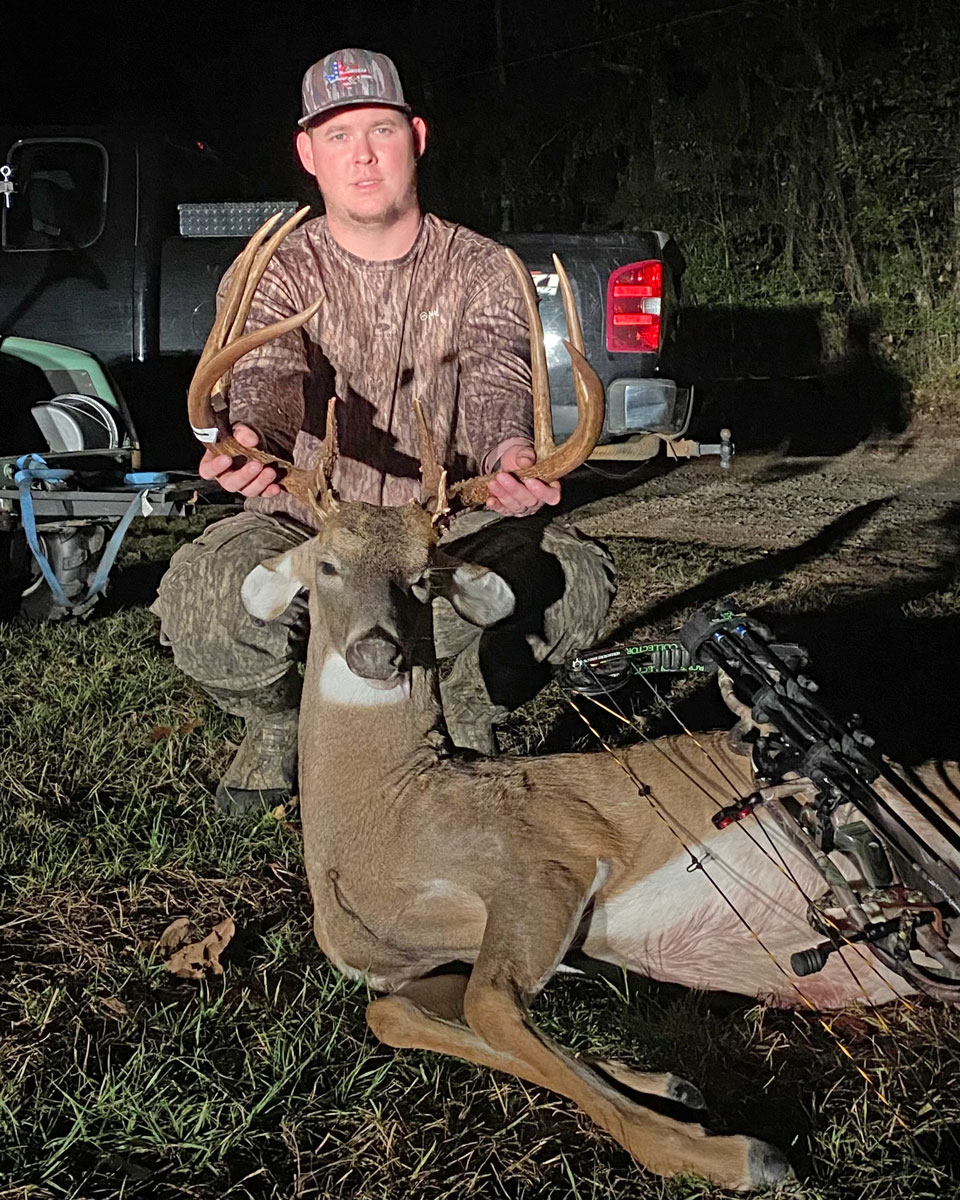 The buck was a main frame 8-point with two sticker points on each side giving the rack 12 points. With main beams over 25 inches each and bases exceeding 5 inches carrying mass throughout the rack, the inside spread was 18 inches. The buck weighed in at 200 pounds and was judged to be 4 ½ years old. Putting the tape on the rack, the green score came to 160 inches.

Don’t even think about ever dry-firing a bow

A list of the dos and don’ts of bowhunting, the more common causes of archery mishaps and some expert advice for avoiding an accident. […]

Jacques Dugas has a 6-point buck to thank for accompanying a big 13-point velvet trophy buck to where he waited with his bow on Oct. 3. […]

About Glynn Harris 438 Articles
Glynn Harris is a long-time outdoor writer from Ruston. He writes weekly outdoor columns for several north Louisiana newspapers, has magazine credits in a number of state and national magazines and broadcasts four outdoor radio broadcasts each week. He has won more than 50 writing and broadcasting awards during his 47 year career.