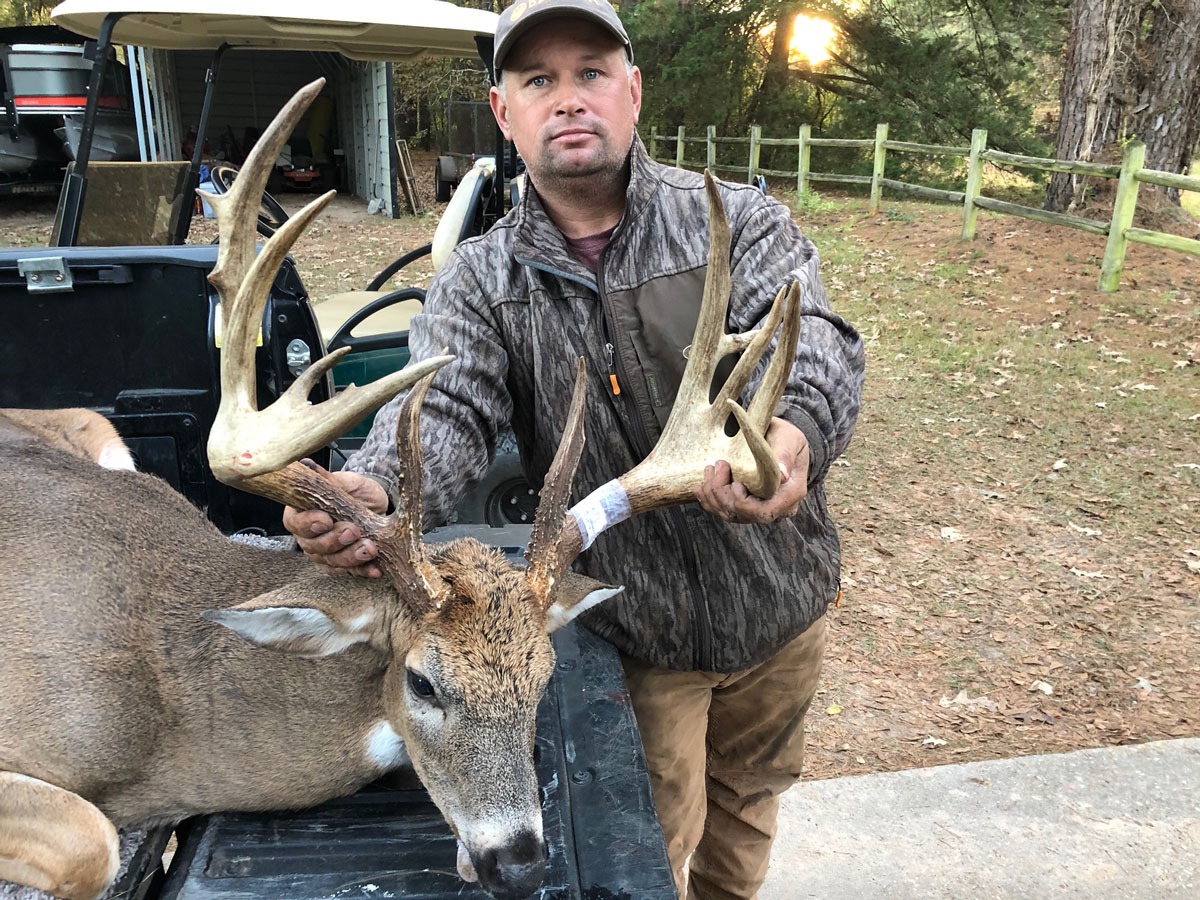 Many hunters, perhaps most, hunt on leases or public areas that are thousands of acres in size. Chad Allison, 45, a welder who lives in Shongaloo, also hunts on an area that he partially owns along with more acreage he has leased that totals a whopping 1,200 acres.

But when it comes down to his favorite places to hunt big bucks, it’s on small tracts.

“One thing I have learned during my years of chasing big bucks is that you have the best chance in waylaying mature bucks when you get to hunt them on small tracts in places like just over the back fence,” Allison said. “This is true especially when deer are pressured. They like to sneak in and lay up in thickets right behind someone’s home.”

Such was the case when Allison secured permission from a Webster Parish home owner who allowed him to hunt behind her home.

Size of the land she owns? Six acres.

“This lady gave me permission to hunt on her six acres and I felt like it would be a good spot to come to terms with a good buck,” he said. “I put out cameras and feed last season and got photos of a really nice 8-point on the property. I felt he needed another year so I decided not to hunt him.”

This season, the buck had blown up to be a genuine trophy. He had shown up only one time in September and Allison got no other pictures of him until Nov. 8, the day he had an interesting and frustrating encounter with the buck.

“My phone dinged around 3 a.m. the morning of Nov. 8 with his picture and I decided I’d hunt him that morning,” he said.

Allison had used his bulldozer to clear a lane adjacent to an old fence on the property. Next to the fence, a cedar tree had fallen and instead of trying to put his lock-on stand up, he felt his best bet would be to avoid spooking the buck by climbing a tree so he opted for crawling into the fallen cedar to give himself a better chance.

“To get right to the point, I let the buck crap on me that morning,” Allison said. “I was in the cedar when my phone dinged and the buck was down the lane I had made and then he was gone. Just as it started to get daylight, I saw something move, I looked up and there 10 feet from me stood the buck. He saw me move when I looked up, spooked and ran and I figured I had really messed up.”

It wasn’t over. That afternoon, Allison decided to head for his fallen cedar hideout again, getting there around 4 p.m. At 4:20, a doe walked out onto the cleared lane at 100 yards and right behind her stepped the buck. Putting the crosshairs of his Browning X-bolt .270 short mag on the buck’s shoulder, Allison hit the trigger and the buck dropped on the spot. 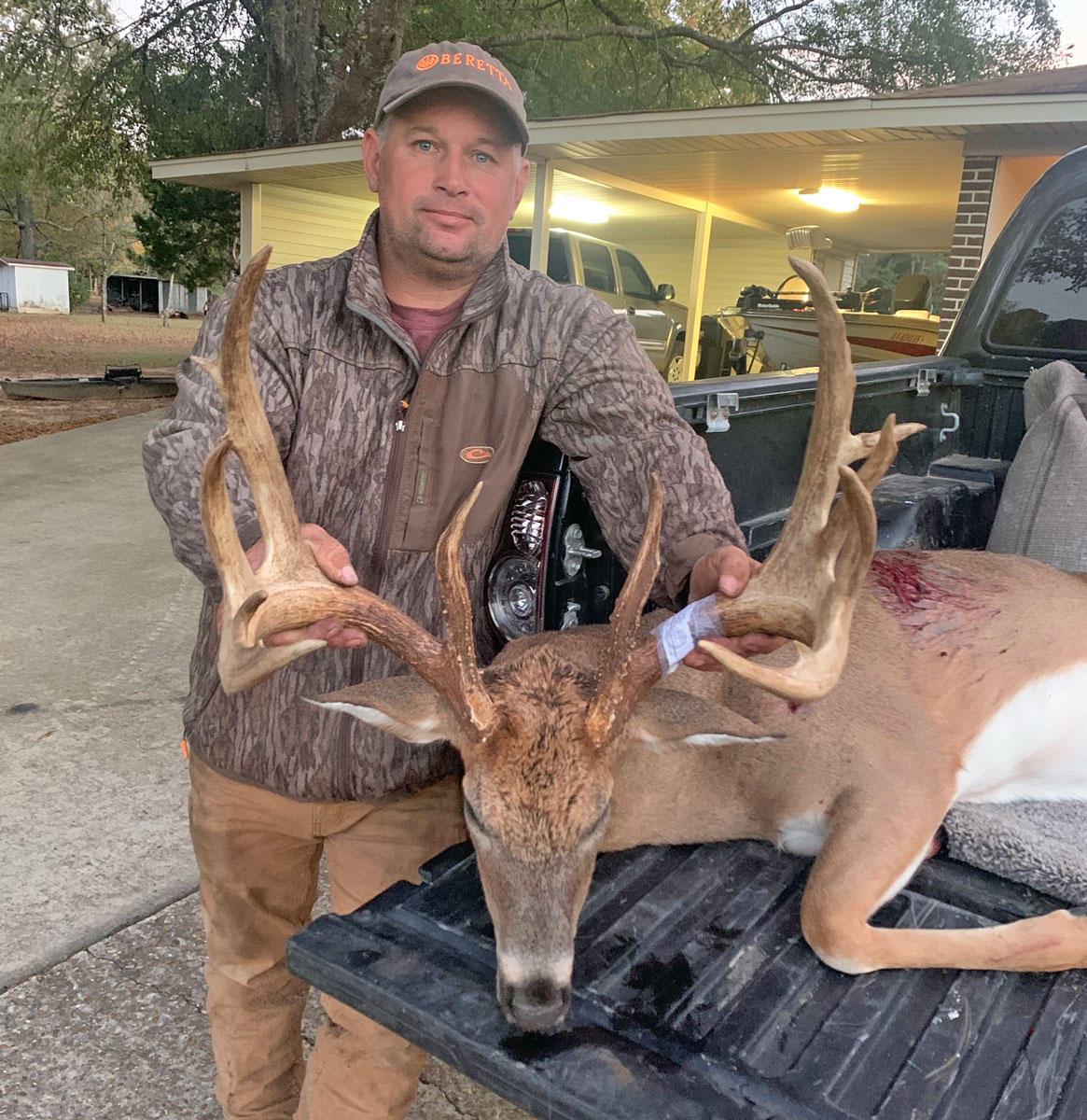 Allison was not interested in statistics on the deer he had taken. He has 21 mounts hanging on his wall of deer, the majority of which were taken around Shongaloo.

My son’s girlfriend had shot a nice buck with her bow and she wanted to take it to Simmons Sporting Goods in Bastrop to enter it in the store’s big buck contest,” he said. “They offered to take my deer’s rack with them to see what it would score, so I agreed. My son asked me if I wanted him to enter my buck in the contest and I told him it was okay with me.  I just wanted to know what it would score.”

The scorer at Simmons measured 14 points on the buck with an inside spread of 17 inches. The mass was impressive, measuring 9 inches between the G2 and G3. The buck weighed around 175 pounds and had only 2 5/8 inches of irregular points and was scored at 174 2/8 inches and currently sets in fourth place in the men’s division at Simmons.

Justin Lyons of DeQuincy took this piebald 10-point buck on Oct. 30 at his hunting club in Calcasieu Parish. […]