Jacques Dugas, a Lafayette manager of parking lot security, has a dependable small 6-point buck to thank for accompanying a big 13-point velvet trophy buck to where the 37-year-old waited with his bow on Oct. 3. The hunt led to one of the earliest kills of the season and also one of the largest and most unique!

“All the trail cam photos I had of the big buck had this little funky-racked 6-point always showing up just ahead of the big one,” Dugas said. “When the 6-point walked down the trail, I couldn’t help but feel hopeful that the big one would follow. Fortunately, he did.”

Dugas hunts on his family’s farm in Avoyelles Parish and had knowledge of the buck as early as 2018.

“I actually saw him and got a photo of him with my phone camera one day in 2018, but didn’t have a chance to take him,” he said. “After season, I found his sheds and determined the buck would have scored in the 180 range then.”

For some reason, the buck disappeared for the following two years and Dugas didn’t get any photos of him in either 2019 or 2020. In the summer of 2021, he started showing up again on his camera.

“Once I saw the photo of him in early July last year, he started showing up occasionally,” Dugas said. “From late September on, I was finding photos of him pretty regular. In planning to hunt him, I had two stands set up, one favoring a north wind and the other for a south wind so I could be in the best position should he show up.”

A lot of action

On the morning of Oct. 3, Dugas drove over from Lafayette to the farm and since there was a light north wind, he chose to sit on the north-favoring stand, which was a custom made 25 foot ladder stand.

“I got in the stand around 3:30 that afternoon and I hadn’t been there long before a doe and two yearlings passed by on the trail I was watching,” he said. “Fortunately, they didn’t smell me and they continued on to a field of soybeans about to be harvested. The trail where I sat was between a bedding area behind me across a slough and led to the soybean field out front.”

Sometime later as the afternoon wore on, Dugas heard a deer coming down the trail and he got somewhat excited because it was the little 6-point with the funky rack.

“Once the 6-point passed by, I got my bow ready,” he said. “I shoot a Bowtech Prodigy bow, Easton Full Metal Jacket arrow tipped with a Muzzy 100 grain broadhead. About twenty minutes after the 6-point passed, the big one showed up. In a matter of about a minute, he was standing at about 15 yards, I drew on him and released my arrow. He took off and I heard him hit the water in the slough behind me. He ran a ways and then it got quiet. I knew he had either come out on the other side of the water or fallen in the water.” 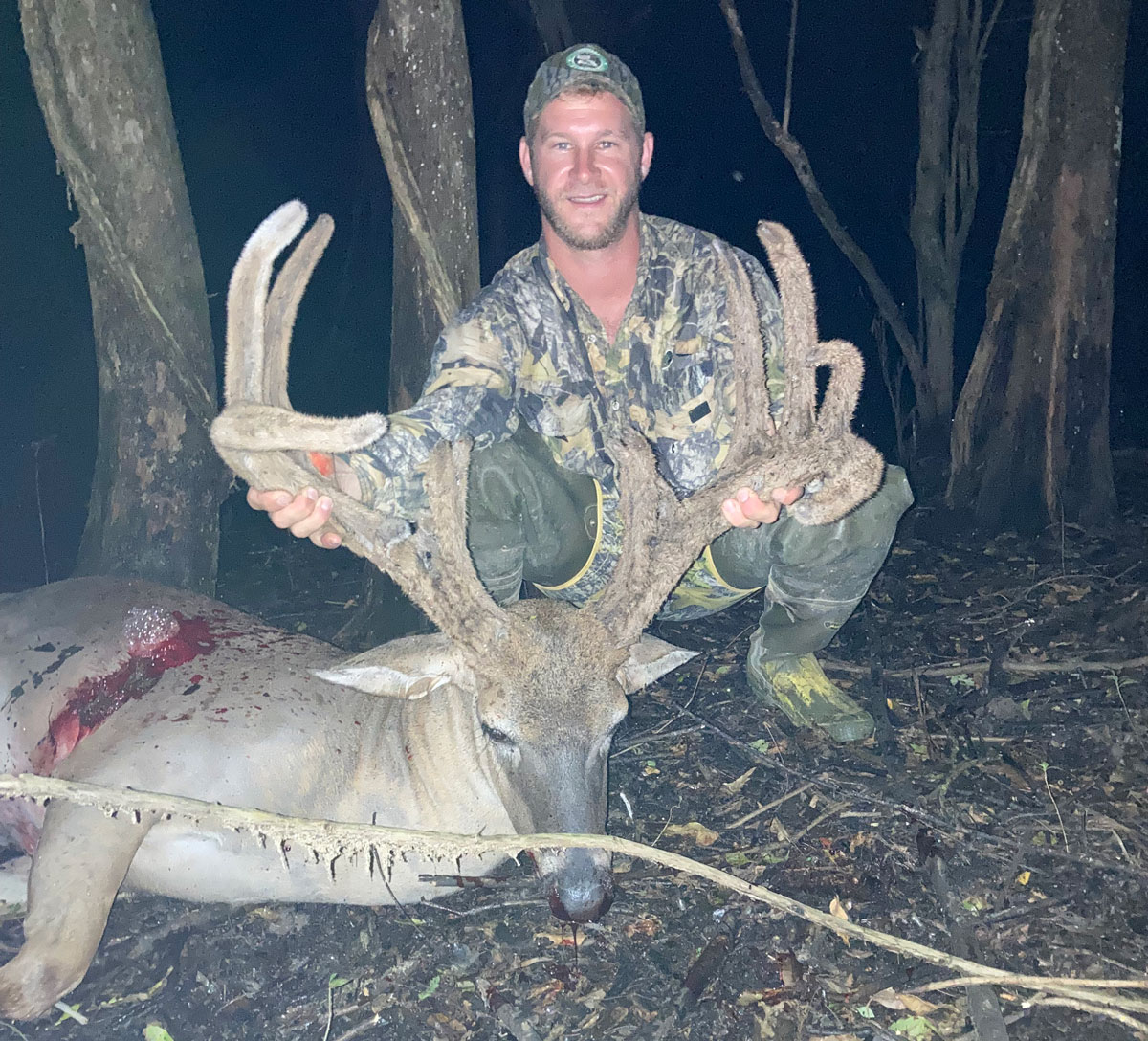 Waiting about 40 minutes as it was getting near dark, Dugas climbed down, found his arrow that showed a pass-through and followed the blood trail to the water. He walked in the direction he had heard the buck in the water and found him piled up some 50 yards from where he was shot.

The buck was a genuine trophy, his velvet rack being a main-frame 8-point with split brow tines and stickers giving him a total of 13 points. Inside spread was an impressive 21 inches with six inch bases. He was determined to be about 5 ½ years old.

Dugas took the buck to Simmons Sporting Goods in Bastrop to be entered in that store’s big buck contest where the rack was measured at 182 6/8 inches, enough to put Dugas’ buck in first place in the store’s archery division.

Justin Lyons of DeQuincy took this piebald 10-point buck on Oct. 30 at his hunting club in Calcasieu Parish. […]