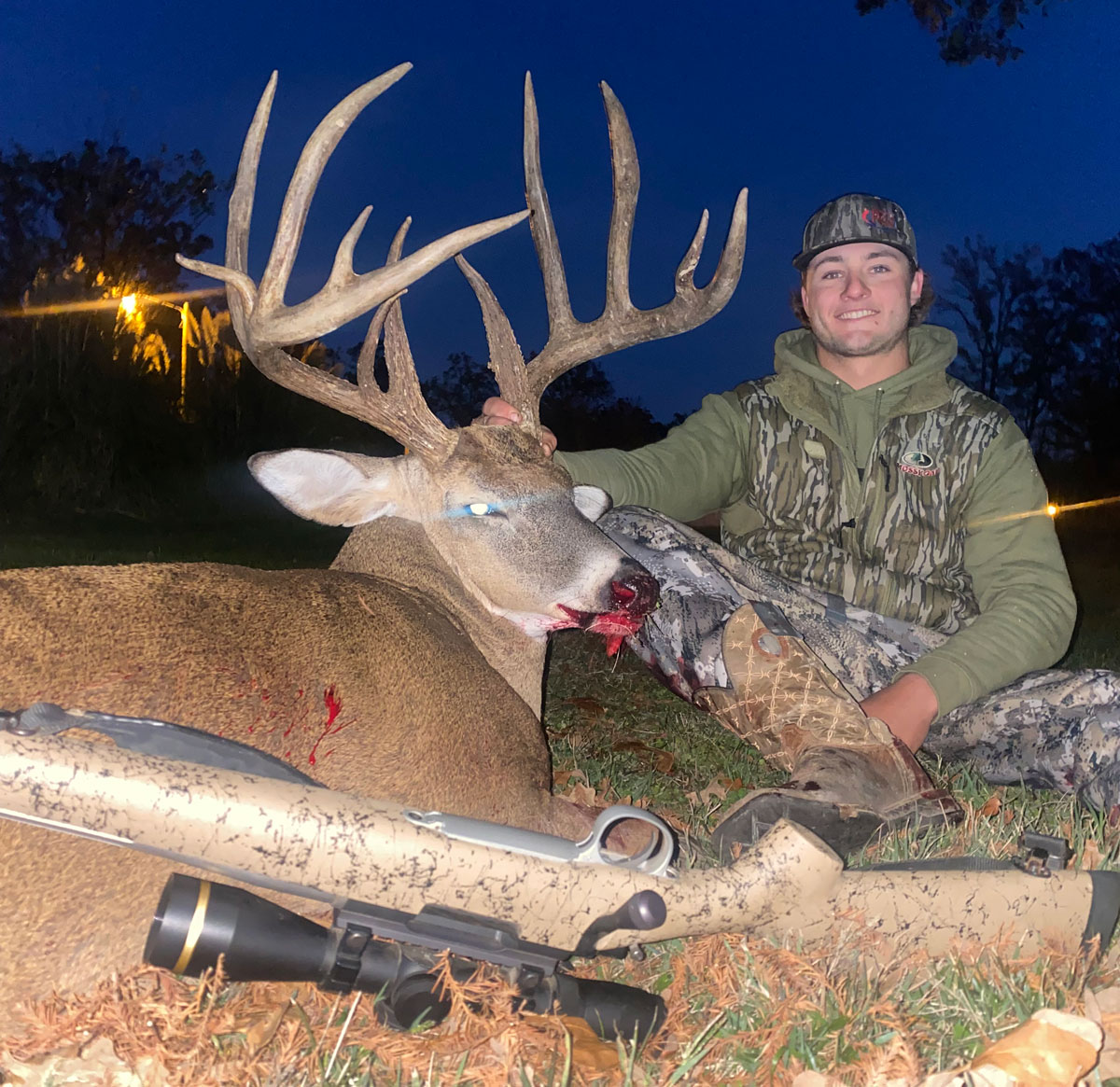 On the morning of Nov. 13, Lee Comer downed a magnificent 182 1/8 inch buck in Natchitoches Parish. Fast forward a few hours and up north in Bossier Parish, Jordan Parker pulled a repeat when he shot a 181 inch buck. Had this happened over in the delta where rich soils and more abundant nutrition is there for the taking, it would not be as surprising. However, Area 2 has no such reputation, proving that with the rut kicking in over most of Area 2 by mid-November, it can happen anywhere.

Jordan Parker, 23, who works with his father in the lawn maintenance business, lives in Benton and hunts on his grandfather’s 2500 acre property five miles from his home. He has been a serious deer hunter all his life, actually taking his first deer when he was 5 years old. Something happened on Sept. 27 that locked him in on a buck he would be zeroed in on this season.

“I had trail cameras out on my grandfather’s place and when I checked my camera on Sept. 27 I found the image of a huge buck, one I had never seen,” Parker said. “That’s when I made up my mind I was going to do what it took to get him; he was huge.”

Parker found an area on the property that seemed the best spot to have a chance at the buck. He put out a feeder 100 yards from a downed tree against which he set up his ground blind. He was getting daylight images of the buck on his trail camera, when all of a sudden the only pictures he got for three weeks were of does and small bucks. The big one had simply disappeared.

“I was afraid another hunter on an adjoining property had gotten him because there were no more pictures of him,” he said. “I admit becoming discouraged because I was afraid I’d never get to lay an eye on the buck. Then on Friday, Nov. 11, it rained and my dad told me I should get on my stand because things can sometimes happen after a rain. I didn’t go Saturday but Sunday morning I went, didn’t see anything and after lunch I decided to go back to my ground blind and I crawled into my blind around 3:00.”

At 4:00 p.m., Parker looked up to see a doe step out of the woods at about 100 yards and watched her feed for a minute or so. However, she seemed nervous and continued to look behind her. Then the big buck stepped out.

“I knew there was probably another deer about to step out and when he did, I said to myself ‘Oh my; that’s him!’” Parker said. “I got the crosshairs of my 6.5 Creekmore on the shoulder, squeezed the trigger and he dropped, got up and took about 10 more steps where he fell. I was so nervous I had to sit for a few minutes to calm my nerves before walking over to check on him.”

The buck weighed in at 205 pounds, was estimated to be 5 ½ years old and sported a tall and heavy rack of 12 points. Bases were 5 and 6 inches with main beams measuring 24 and 25 inches. Inside spread was 17 ½ inches and initial measurement of the rack revealed a score of 181 inches of bone.

Downing a 180-inch buck in Area 2 is quite a feat; having two taken in the area on the same day with near identical scores is absolutely incredible.