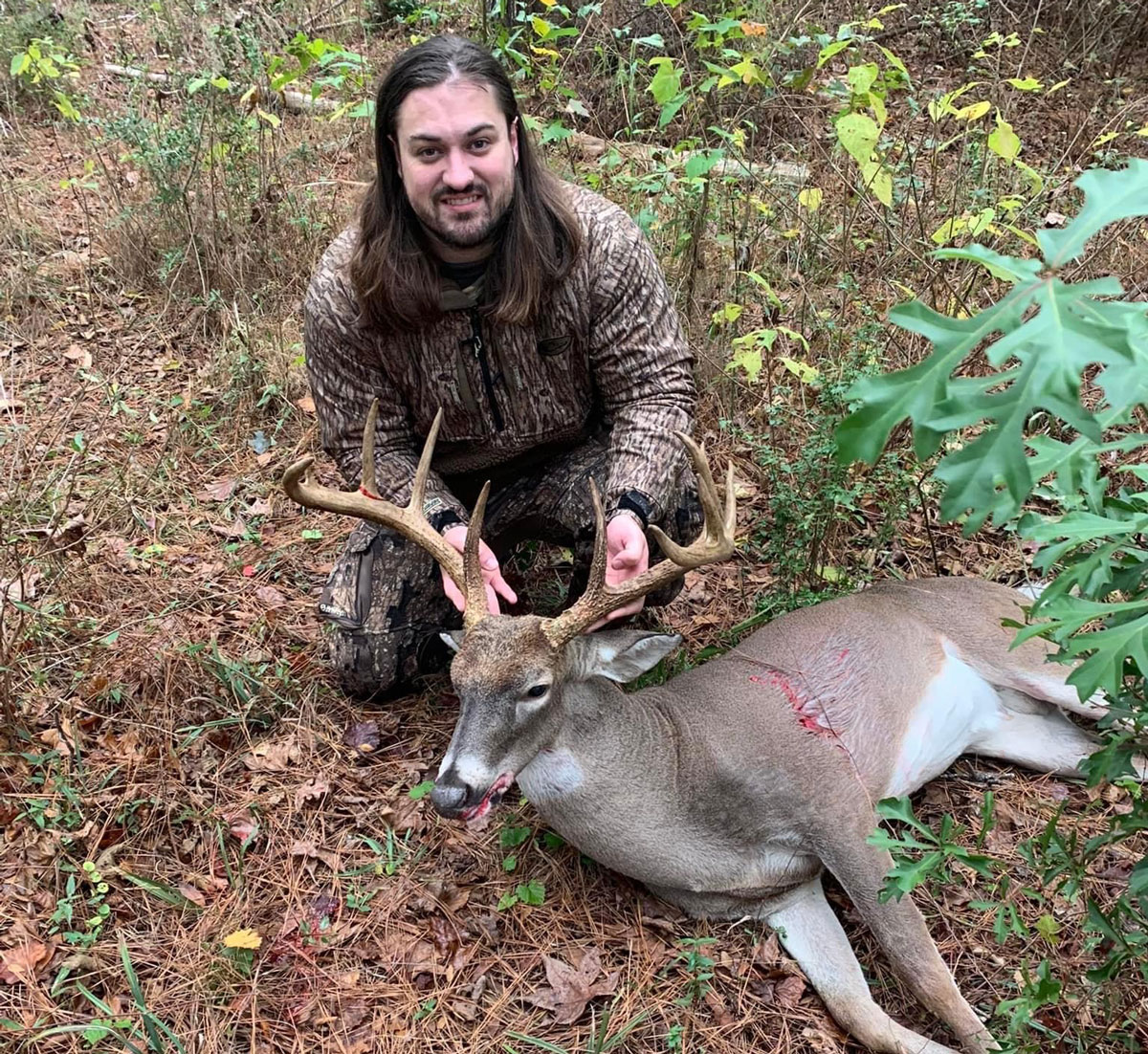 When 28-year-old Leigh McClendon climbed aboard his Red Neck stand affixed to a five-foot platform on the morning of Nov. 14, his main goal was to observe deer activity in anticipation of the upcoming rut. A big 11-point buck had shown up on his trail camera in the area and he felt like his best chance at the buck wouldn’t happen until the rut kicked in; he was just there to see what he could see.

McClendon, who lives in Alexandria, is a former elementary school teacher but gave that up to work for himself as a social media creator. He hunts on family land near Montgomery in Grant Parish and his stand is located behind his grandmother’s home.

“I sprayed myself down with scent free material and when I got to my lane headed to my stand,” McClendon said. “I tied on my drag rag and sprayed Dan DeWitt’s Cooter Juice to it. I got in the stand around 5:35 and it was still dark. I had checked to see that legal shooting hour began at 6:08 that morning and at 6:15, I looked up to see the silhouette of a big deer; I couldn’t tell if it was a buck or doe because it was still pretty dark. The deer had stepped out at about 50 yards and was walking away from me.”

Picking up his Winchester .270, he got the scope on the deer as it was walking away and could see a big rack. He recognized it as the big buck he had seen on his trail camera.

“The deer was walking along the edge of the woods as it headed down the lane away from me,” he said. “I felt like he would step into the woods at any moment, so I got the scope on him planning to take the only shot I would have if he gave me a good quartering look. Just as he started to step into the woods, he quartered to me at about 65 yards, I hit the trigger, the deer ran and I decided to give him an hour before going to search for him.”

Getting in touch with his dad, the duo began the search after giving the buck an hour to expire. Walking to the spot where the deer was standing when shot, they found evidence of a good lung shot.

“After following the trail some 25 yards, we lost the trail because there was no more blood to be found,” McClendon said. “My dad and I split up and began searching for any evidence that would indicate where the deer had run. It wasn’t long before my dad found more blood. I joined him and we walked up and I saw the white belly up ahead about 100 yards from where I shot him. You talk about having a feeling of relief.”

The buck sported a heavy rack of 11 points with an impressive inside spread of 20 2/8 inches along with heavy mass. The buck was estimated to have weighed about 200 pounds and was determined to be approximately 6 ½ years old. Putting a tape on him, the rack measured 149 1/8 inches of mass.

Not a bad morning for McClendon, who was only on his stand to observe deer activity before the rut kicked in.