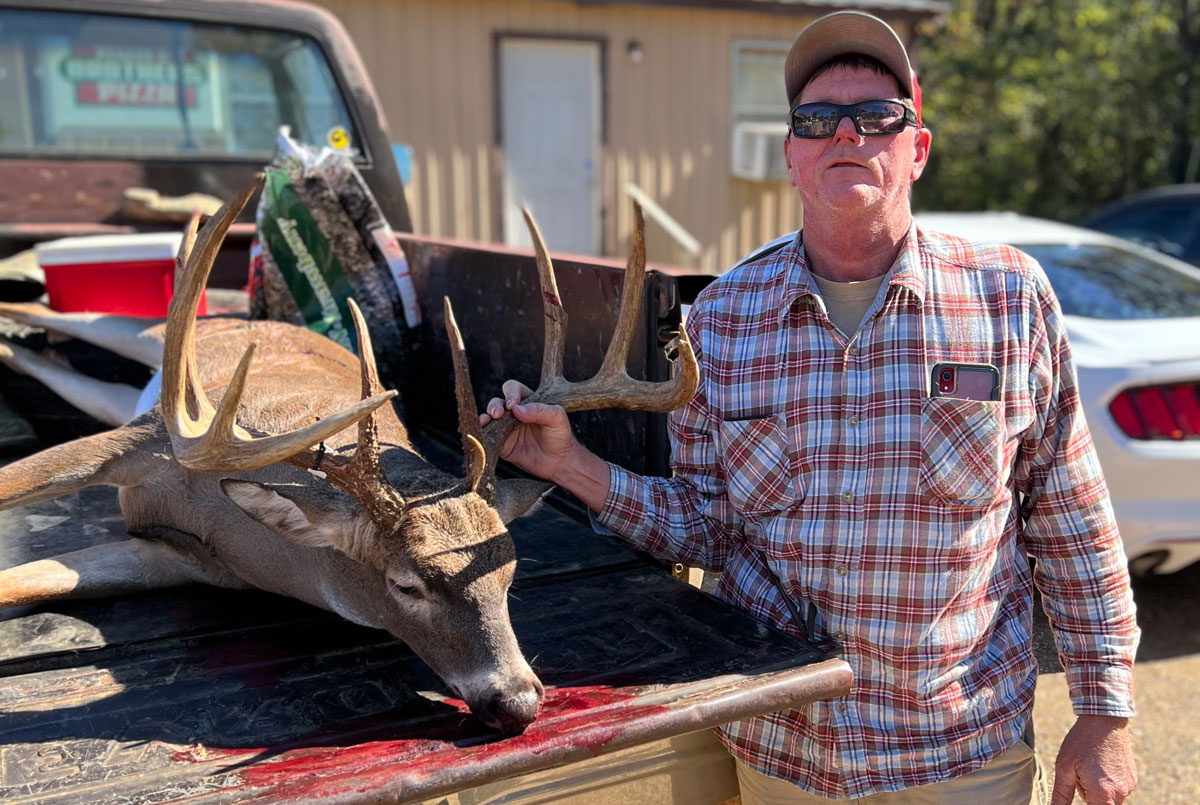 Lee Comer, 57, a supervisor of a heavy equipment company, found himself in a situation that could easily have ended in heartbreak and disappointment. A huge buck, impressive enough to garner the name “Illinois” in honor of big bucks produced by that state, stood 40 yards from Comer offering a perfect broadside shot on the morning of Nov. 13.

Squeezing the trigger on his Remington .270, he heard a sickening sound.

The firing pin hit the bullet just right but for some reason, it did not fire. The bullet was a dud that in almost every case would have sent a mature buck hightailing away.

“At the ‘click’, the buck turned and looked directly at me but I didn’t move a muscle,” Comer said. “I carefully eased the action open, gently slipped the faulty bullet out, let it fall on my jacket so as not to make a noise, reached in my pocket for another round and quietly slipped into the action and slid the bolt forward. All the while, this big buck was just standing there looking at me at 40 yards.”

He was finally able to squeeze off a shot, the buck jumped straight up and took off through the woods.

How the morning started

Comer hunts on 129 acres located near Black Lake in Natchitoches Parish that he and his son have hunted for years. His box stand located on the ground looks over a grown-up clear cut separated to reveal a food plot on which rye, wheat and oats are planted. He also feeds high protein feed giving the deer nutrition they need to grow. Prior to the near disastrous encounter, Comer described what happened before the buck stepped out.

“I got in my stand around 6:00 that morning,” he said. “At 7:15, I heard a buck grunting no more than 20 yards from me in the cut-over. Fifty yards away, a second buck started to grunt, and here I sat listening to two bucks grunting at each other. At 7:30, old Illinois stepped out 40 yards from me and was facing away looking for the other buck that was grunting. My gun was already on the window and that’s when I thought I had really messed up because of the gun failing to fire.

“After I was finally able to shoot, I texted my family and friends on an adjoining club to tell them I’d just shot ‘Illinois’ and he had run off, but I knew I had made a good shot on him so I decided to go back to camp and give him time to expire. I was so emotional as I thought about the close call I had with the bad bullet and then finally getting a shot at him, I admit I was shedding some tears as I walked back to camp.”

Friends came to help find the buck that had run roughly 100 yards before expiring. The statistics on the deer validate the name, “Illinois,” because of its outstanding characteristics.

The buck tipped the scales at an eye-popping 280 pounds, sported a massive rack of 11 points, measured 21 4/8 inches on the inside spread with bases over five inches and main beams 25 and 27 inches each. The buck, estimated to be at least six and maybe 7 years old, was scored twice, once locally and a second time at Simmons Sporting Goods where the buck was entered in that store’s Big Buck contest. He measured exactly the same at both locations, 182 1/8 inches.

Once the 60-day drying period is over, the rack can be officially scored. The leader statewide for typical bucks is 184 6/8 while the fifth place buck scores 180 5/8. It will be interesting to see how Comer’s trophy eventually stacks up.

Adding to his good fortune, Comer was back in his stand on Nov. 17 when he brought down another big buck, not as impressive as “Illinois,” but his 7-point buck measured at Simmons Sporting Goods stretched the tape to 130 5/8 inches.

Hunter Frey left his hunting trip in Missouri to return home and kill this big Concordia Parish buck on Nov. 19. […]