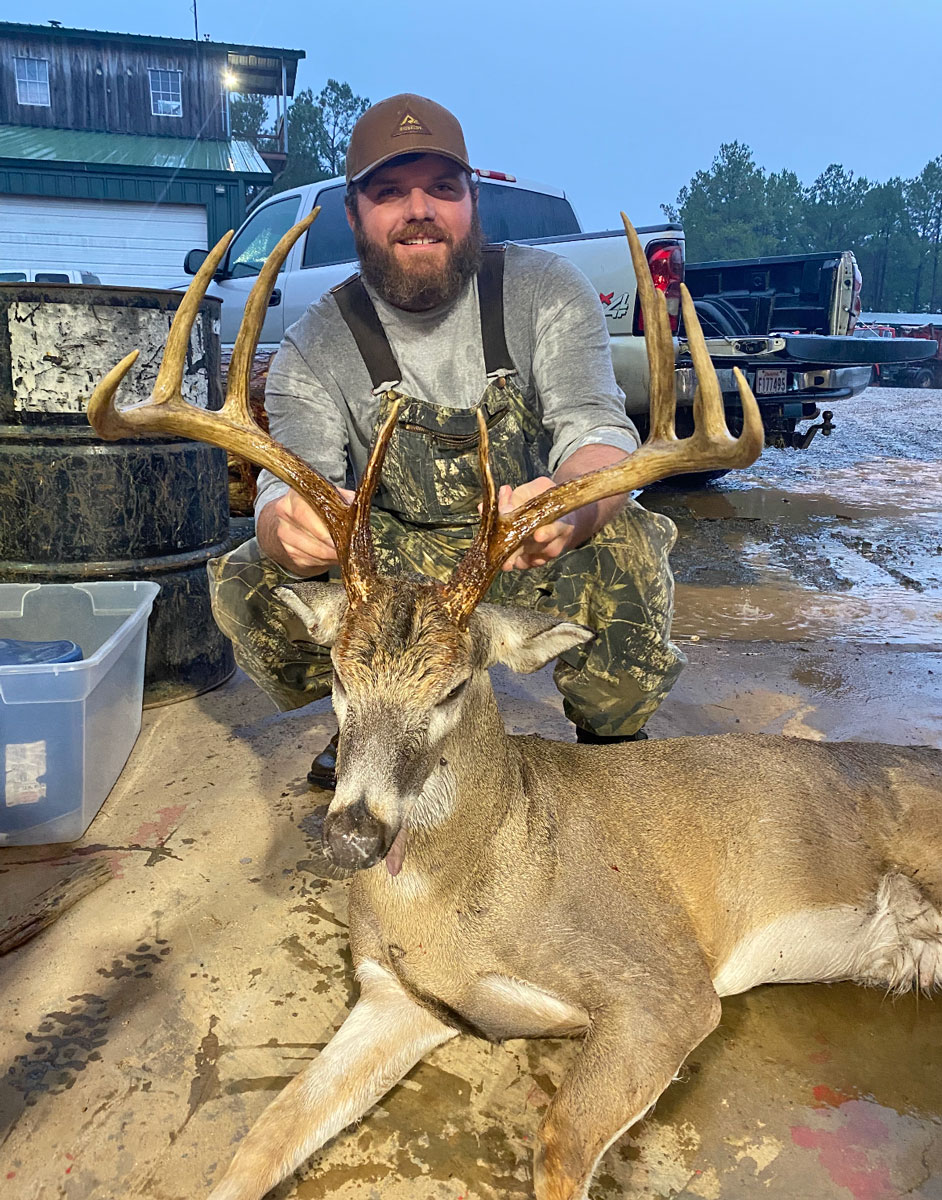 Jordan Jones, 29, from Mansfield had the chance lots of hunters would die for a year ago when a big DeSoto Parish buck offered him a shot with his primitive firearm. He got three shots at the buck but unfortunately he learned later that his scope mounts were loose and except for one bullet that grazed the buck’s back, the buck trotted off to live another year.

Hunting on his 450 acre farm east of Mansfield, the buck gave Jones another chance on Nov. 11. This time, his 300 Win-Mag was dead on and he dropped the buck in its tracks at 140 yards.

“I had been watching this buck on my trail cameras for the past three years,” Jones said. “The first year he was a basket-rack 8-point but I saw potential in him.”

The weather on Friday, Nov. 11, was anything but amenable to enjoying a deer hunt. Rain was forecast for the afternoon, but according to the forecast there was scheduled to be a period of rain followed by a break in the rain in mid-afternoon before it was scheduled to begin again after the pause.

“I had hunted that morning with the idea of taking advantage of the break in the rain believing that maybe when it stopped, I might begin to see some action,” Jones said.

When he got to the stand that afternoon, the first volley of rain was ongoing as he sat in the rain waiting for the break.

“After an hour, the forecaster was right; the rain slowed and then stopped just after 3:00 and I started watching the pipeline where my box stand was located,” he said. “I can see 400 yards both in front and in back of the stand with another lane over 400 yards, so if anything moved I should be able to see it.”

Growing at the edge of the pipeline out front is a cedar tree with a scrape under it. A tree that deer had traditionally been using to make scrapes.

“After awhile, I could hear something walking in the woods about 20 yards from me and the buck stepped out and walked over to the cedar and made a scrape,” Jones said. “It was walking away from me and not offering a shot, but at about 140 yards he turned broadside. I got on him with my scope and hit the trigger. The buck dropped on the spot.”

Climbing down from his stand, Jones walked up to the fallen buck and noticed first off the scar at the top of his back where his bullet had creased the year before.

The buck was impressive with 12 points and an inside spread or 20 5/8 inches. Main beams were 22 and 23 inches each with bases measuring between four and five inches. His weight was estimated at 195 pounds and his rack was measured at an even 146 inches.

“The buck was only 3 ½ years old and we normally don’t shoot one that is under 4 ½ inches. However,” he said, “this buck had given me a second chance and was just too good to pass up.”