Timmy Dillard, a 38-year-old Cotton Valley employee in the petroleum industry, was afraid the big buck he had been after since last season was about to spoil his plans once again — when it walked to within eight steps of his stand.

This time, however, a passing doe diverted the buck’s attention long enough for Dillard to draw his bow and send an arrow through the vitals of the 10-point, 158-inch, 265-pound buck.

“Last season, I had trimmed a couple of limbs in the way, but instead of dragging them away and out of sight, I let them lay where they had fallen,” Dillard said. “When the big buck made an appearance, he sensed something wasn’t right as he stared at the newly cut limbs on the ground for 10 minutes, turned around and left. That was the only time I saw him in daylight, and he became nocturnal from then on.”

The Webster Parish buck that Dillard was targeting was a dandy that first appeared on his game camera in December 2019 as a mature buck he and his son nicknamed Brutus. Dillard’s goal was to stay after this deer until he could lay claim to the big-bodied, heavily antlered buck.

“In September, just before the season opened this year, I saw him on camera several times, but then one day as he was at the protein feeder, three big boar hogs came in and ran him off,” Dillard said. “I felt my best bet was to try and eliminate the hogs, so I got in my box stand with my rifle planning to shoot some hogs. The hogs didn’t show up that day, but the big buck did, so I watched him feed and eased out of the stand after he left.”

Opening day of bow season was not a good day, with warm temperatures along with wind from the south and showers. Since Dillard’s lock-on stand favored a north wind, he passed up the chance to hunt, hoping that the weather would improve.

“On Saturday, Oct. 2, I watched the weather and was relieved to see that the wind that afternoon had started to switch directions, coming out of the northeast so I decided to get on my stand late that afternoon. My stand sits about 27 yards from my protein feeder, and the wind was in my favor,” he said.

Some help from a doe

At 6:15, a doe came from a direction that allowed her to pick up his scent and, according to Dillard, the doe stopped, stared in his direction and began snorting and stomping.

“I figured the hunt was over, with the doe telegraphing to other deer in the area that they should stay away,” Dillard said. “However, the doe left after 10 minutes and I decided to sit tight, although in my heart I felt like the hunt was blown.”

Shortly after the doe left, Dillard heard another deer approaching, crossing a dry creek and headed toward the feeder.

“When the deer stepped into the clearing, I didn’t pay attention to the rack so much as to the big body. Instead of walking to the feeder, the big buck started walking in my direction and stopped eight steps from me. My heart began racing to the point I was afraid the deer could hear it beating,” said Dillard, who was unable to move with the deer so close. But then,  another doe walked out behind him, and the buck watched the approaching doe, giving Dillard time to ease his bow off the hanger and draw.

“With the deer so close, when I looked through my sight, all I could see was brown hair, and it was troubling to find where I should aim,” he said. “I thought I had it just behind his shoulder, released the arrow and heard a loud ‘Whack’! letting me know I had hit the shoulder blade. The deer squatted and then took off with the arrow sticking out, letting me know I didn’t get much penetration.” 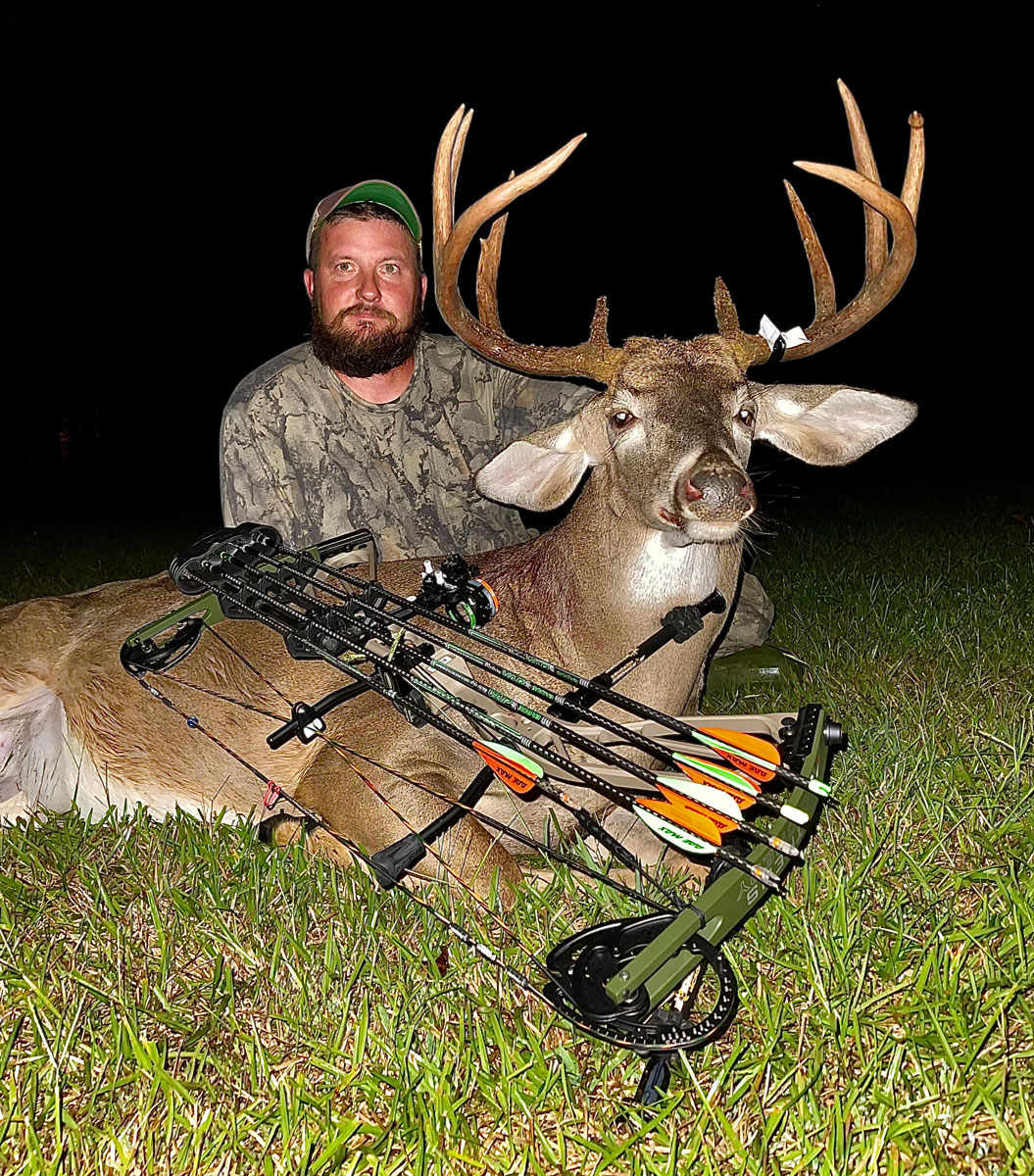 After calling friends to help in the search, Dillard’s brother found the buck 60 yards from where it was shot. Incredibly, the Swacker broadhead had gone through the shoulder blade, with the tip penetrating the heart.

The buck was estimated to be five or six years old, with an inside spread of 17¾ inches and a green score of 158 6/8.