Melissa Maddox, a hospice nurse who lives just outside Ruston, is fortunate to get to deer hunt a few hundred yards from her home. She and her dad have a 72-acre lease that is located just across the fence from a pasture they own.

Their lease consists of a mix of pine and hardwoods, but the kicker is a five or six year old clear cut that adjoins the property to the west. The thick and tangled clear cut provides an ideal hang out for deer, especially mature bucks that find the thicket ideal for bedding up and providing a measure of safety.

When the rut begins, however, it’s a whole new ball game as bucks tend to drop their guard, leaving the safety of the thickets to look for receptive does. That’s what a particular big heavy-racked buck probably did on Nov. 23 and it cost him his life.

“We didn’t have cameras out but my dad and I found some rubs and scrapes in the area near my stand,” Maddox said. “Even though we never saw the buck, all the buck sign we found let us know it was a good one.”

The target is acquired

Hunting on the afternoon of Nov. 22, Maddox was sitting on her box stand that overlooks a planted food plot along with shooting lanes on both sides of the stand. Just before dark as she was about to vacate the stand, two does stepped out and Maddox spotted something behind the does in the thicket.

“I could finally see antlers and watched the buck sniffing the air toward the does,” she said. “He stayed in the thicket and never walked out. My dad came and picked me up and I told him what I had just seen. We planned to give it another shot the next afternoon after I got off work.”

The following afternoon after climbing back in her stand, it wasn’t long before the two does provided a repeat performance by once again stepping out into the lane.

“I texted my dad telling him about the does coming out and he told me to just sit tight and be on watch; the buck might be behind them,” Maddox said. “He told me that if a good buck walked out to not concentrate on the rack because that usually creates a case of nerves, especially if it’s a good buck.” 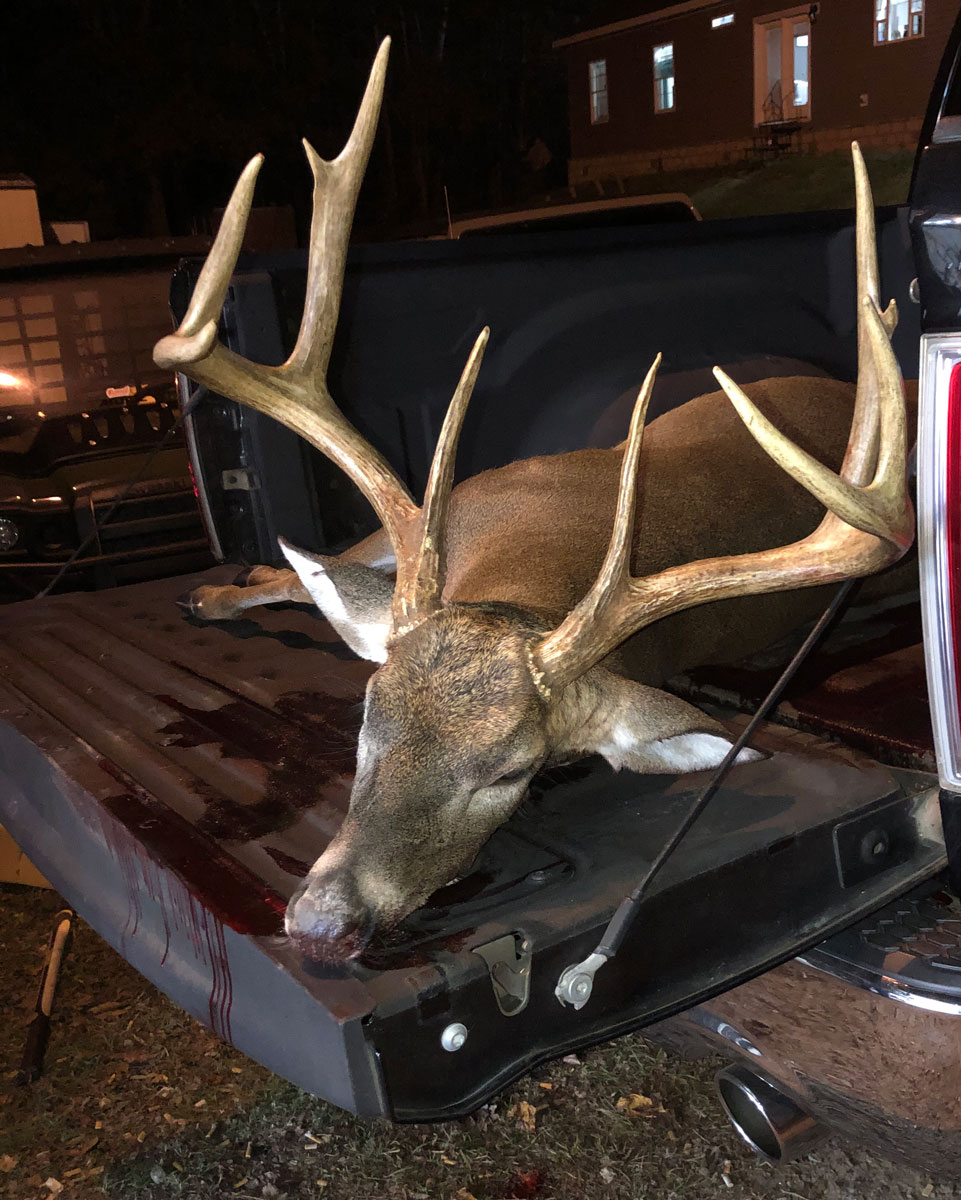 Soon after the does appeared, Maddox looked up to see a big buck walk out into one of her lanes.

“My first reaction was saying to myself, ‘oh my; what in the world is this?’” she said. “When the buck came out, he looked around and when he was at about 100 yards, he turned broadside giving me a shot. I hit the trigger on my Remington 200 win-mag. He buckled and fell but then he got up and ran; I heard him crash down.”

A prank for dad

Maddox decided to play a trick on her dad who was on a stand not far from hers. When he heard her shoot, he texted her to ask what she had shot. 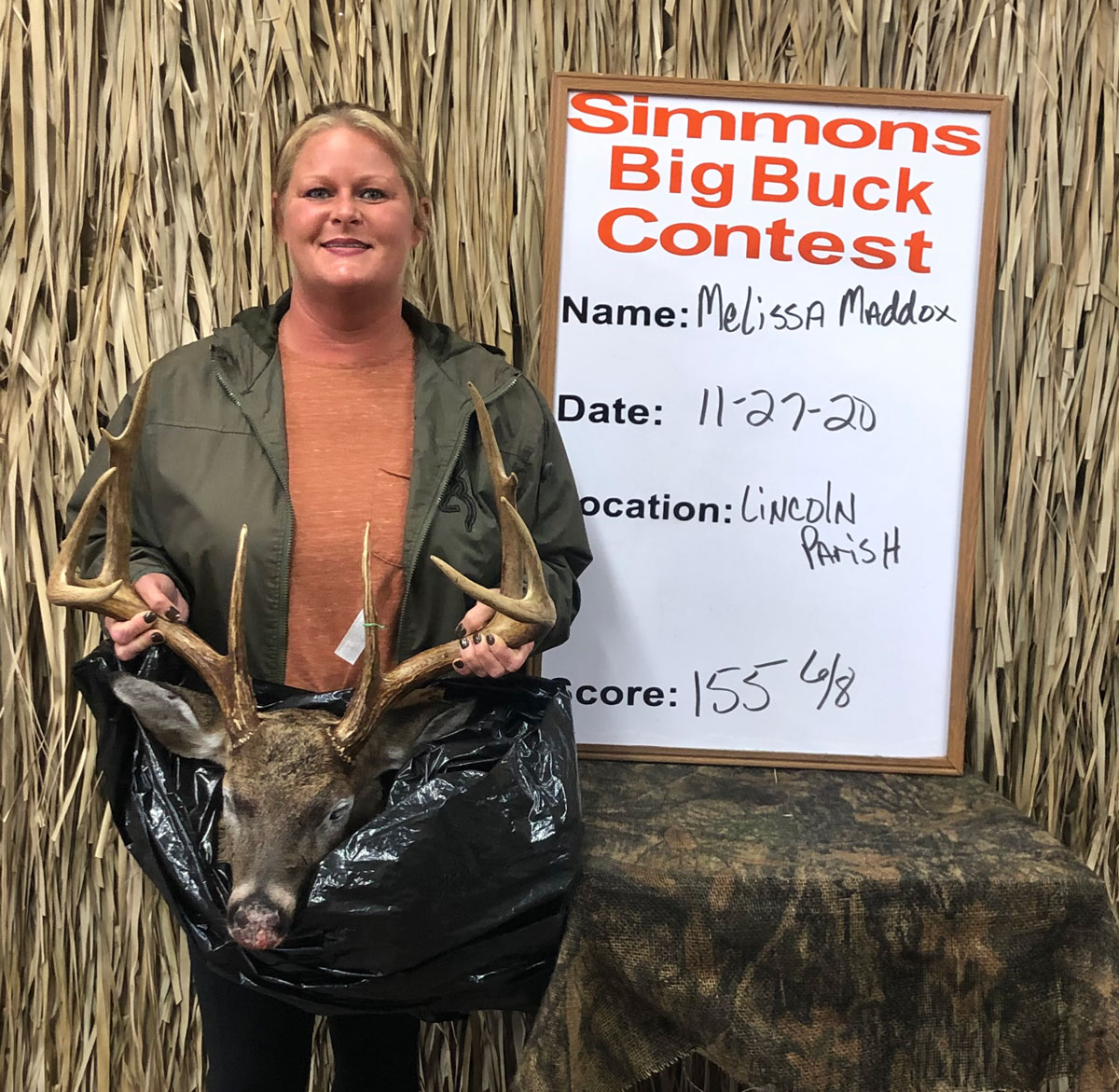 “I casually told him I had shot a 6-point. When dad got there with the Ranger side-by-side, I pointed the direction where I had heard the deer fall. Using the lights on the Ranger to follow the blood trail, we drove up to the buck which had only traveled some 20 yards. Dad knew he had been had when he saw the buck and how big it was,” she said laughing.

The buck, estimated to be 4 ½ years old, sported a rack of 10 points with an inside spread of 19 6/8 inches. Main beams were 24 and 25 inches with brow tines over 7 inches and bases of 4 ½ inches. The heavy bodied buck weighed in at 230 pounds. Buckmaster scorer Greg Hicks measured the rack and came up with a score of 155 inches.

A jig from Bryant’s Custom Jigs has been Hunter Freeman’s go-to bait from his collegiate fishing days to his current spot on the FLW Pro Tour. […]

About Glynn Harris 402 Articles
Glynn Harris is a long-time outdoor writer from Ruston. He writes weekly outdoor columns for several north Louisiana newspapers, has magazine credits in a number of state and national magazines and broadcasts four outdoor radio broadcasts each week. He has won more than 50 writing and broadcasting awards during his 47 year career.