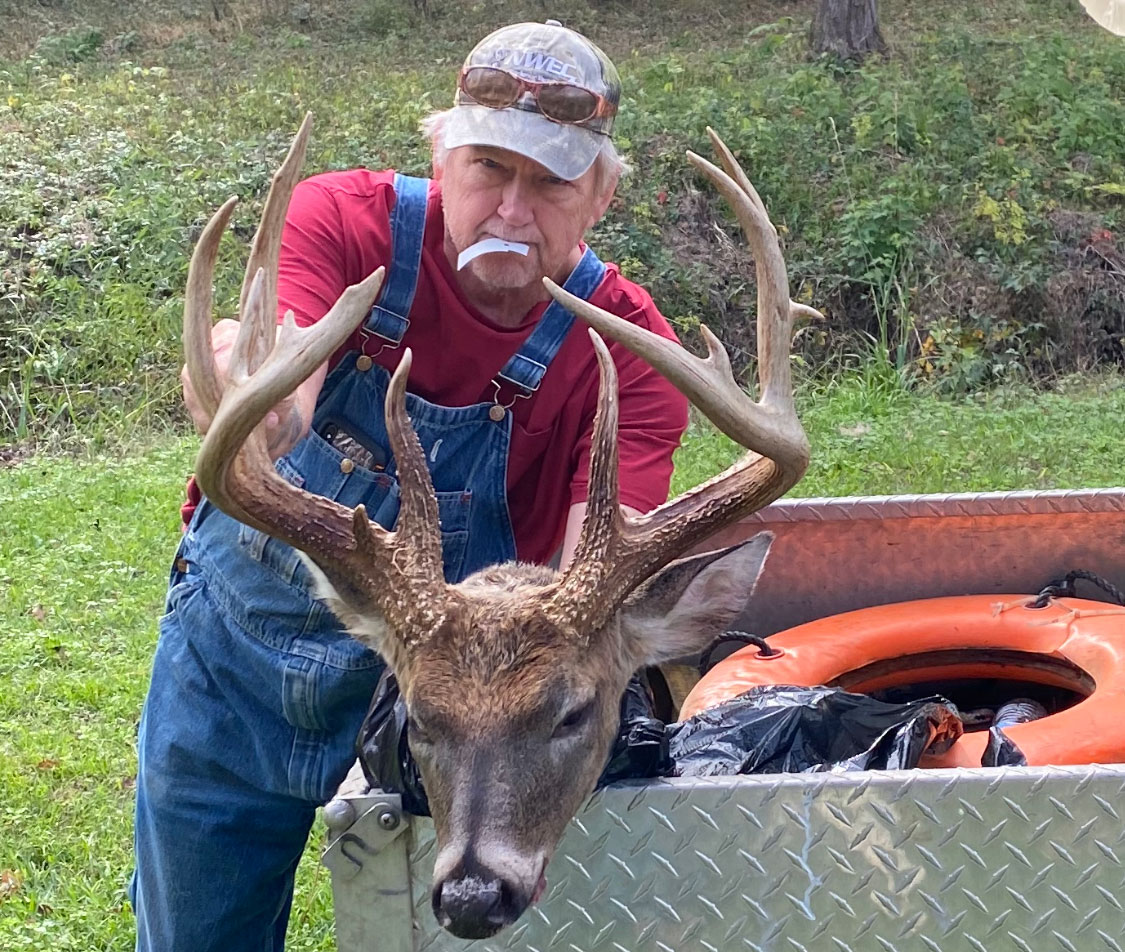 When retired environmental engineer Ray Mangrum’s son, Sam, tried to attract the attention of a big Bienville Parish buck with his rattling bag, nothing happened. Then all heck broke loose when he picked up his phone and used it to activate a loud and deep grunt call and the big 14-point buck came rushing out of the woods spoiling for a fight.

“This is a buck we have been keeping up with for the past three years,” Mangrum said. “Two years ago he was a nice 8-point, last year he was a really good 8-point, but this year, he just exploded.”

Mangrum, who lives in Minden, hunts on his own Bienville Parish property, a 45-acre tract of land that is connected to Lake Bistineau. He also has a camp on the land that he and his family enjoy.

“I had noticed that although trail cam photos showed the buck coming out before daylight, he had started showing up a little later each morning,” Mangrum said. “On the morning of Nov. 20, my son and I headed for my box stand around 5 a.m. to be there in the event he should decide to come out of the woods.”

Soon after daylight, a few does showed up to feed around the feeder Mangrum has out; along with two food plots planted with a mixture of winter peas, rye grass and oats.

“As it got to be around 7 a.m., I told my son that I guess the buck was not going to come out today. When we walked in,” he said, “we scared a bunch of deer off the food plot and I figured one of them may have been him.”

Before deciding to vacate the stand and call it a day, Mangrum’s son decided to try something different, feeling that at least it couldn’t hurt. He had a rattling bag, and on his cell phone he had installed a buck grunt call, one that is loud and deep. After getting no response from the rattling bag, he pulled out his phone and hit the button to emit the loud aggressive grunt.

“As soon as Sam’s phone made the grunt call, the buck just shot out of the woods at full speed and he looked mad apparently thinking another buck was messing with his does,” Mangrum said. “I only had time to get my gun up and on him – I shoot a Weatherby .280 – and hit the trigger. When I shot, the buck turned and ran towards us down an old trail and then collapsed about 50 yards from where I shot him.”

Mangrum and Sam sat in the stand a few minutes just to be sure the buck was down and when they walked over to him, they were astounded at the size of the deer.

“He had fallen beside an old log and when I reached down to grab his rack I couldn’t believe the bases, which were later measured to be nearly 7 inches each,” Mangrum said.

The buck sported 14 points with an inside spread of 16 4/8 inches. Main beams were 23 and 24 inches while G2s were each over 12 inches. The most astounding feature of this 5 ½ year old buck was the size of his body.

“We didn’t weigh him but it took all my son and I could do to load him up,” Mangrum said. “Sam is a big fellow and we estimated the buck would have weighed in the 280 pound range. We took him to Simmons Sporting Goods where he scored 174 7/8 inches, which at the time put him in first place in the Men’s Division in the store’s big buck contest.”

Mangrum said the deer in his area seem to be of a good strain, and as a result they limited the number of does they take each season to keep the good blood line intact.

“There are two more bucks on the property that will rival this one,” he said, “and it will be interesting to see what they are a year from now.”