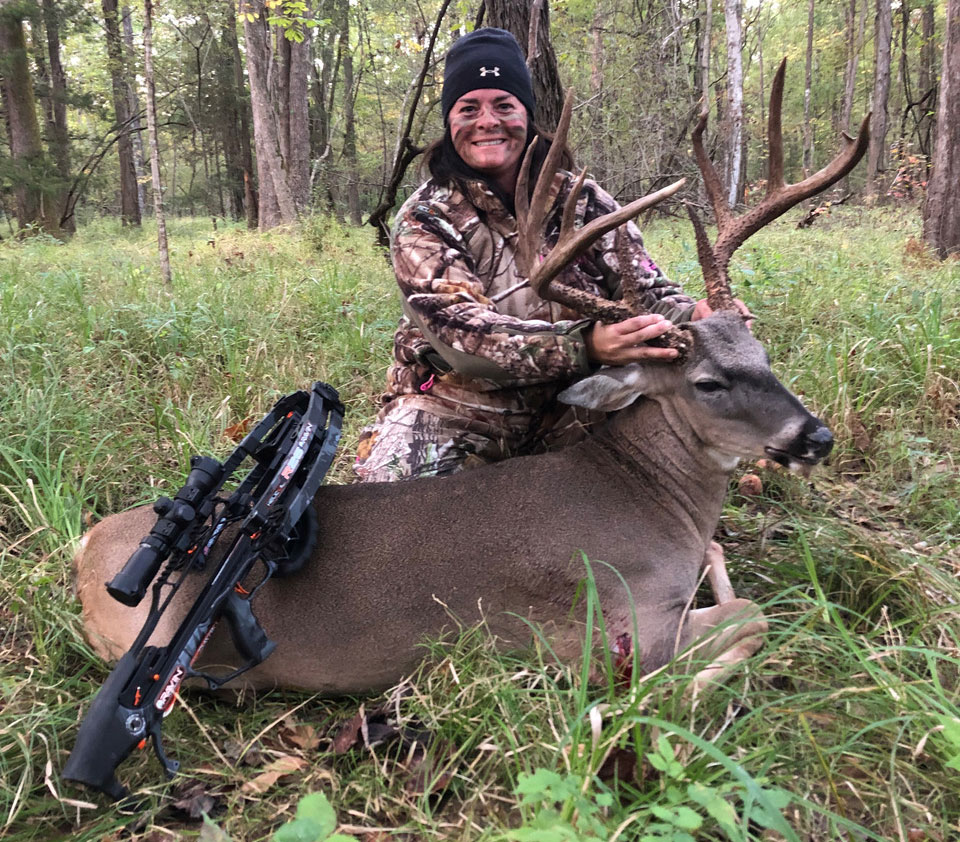 Stacy Welty Owens of Covington, La., has been hunting the last 15 years, but a recent trip to family land near Natchez proved to be her most exciting hunt ever.

“Our land borders a National Refuge and most of it is open woods where you can see for a ways,” Owens said. “I was hunting a stand overlooking a small food plot during the youth weekend and my husband, Jacob Owens, had taken our son hunting on another stand. Does came out from my right and crossed over the narrow food plot to my left.”

Owens was hunting with a Ravin crossbow, so she decided to shoot one of the does.

“I’d practiced a lot the day before, so I was ranging the four does at 25 yards,” Owens said. “I looked to the right and there he comes, just like on the Outdoor Channel and I’d never seen one that big before. All I saw was horns! I shot a 128-inch buck the year before but this one was so much better.”

This buck, a main frame 9-point with a kicker, green scored 167 inches, had a 20-inch spread, was aged at 5 ½ years old and had a lot of stickers around the bases. Ironically, Owens had never shot a deer with a crossbow before, but she was more than up for the task and harvested the buck of a lifetime!

“This was the first time we had seen this buck,” she said. “We’ve been trying to educate ourselves about hunting deer and learning patterns of deer travel and hunting by the wind. I had a great wind for this stand that day and he came across upwind of me and never suspected a thing.

“When I saw him coming from the right all I saw was horns and I knew that he was a shooter and didn’t look to count the points or admire the rack anymore. He came on a mission, and he came up to my left side and stopped and I couldn’t find him in the scope. I’d forgotten to take the lens cap off so I flipped the lens cover off and he turned broadside. I squeezed the trigger, but it wouldn’t shoot. I calmed down, squeezed the safety off, put the 30-yard pin on him, and fired.”

“When I heard the arrow hit him like a baseball bat, I knew I’d made a good shot on him,” Owens said. “I saw blood gushing out as he ran about 50 to 60 yards and stopped, then leaned to the right and fell over. I called my husband and told him that I’d just shot a monster and seen him drop. This was about 4:45 with plenty of daylight left before the time change. When my husband got over there we walked over and found him lying on his side with the rack sticking way up high off the ground.

“As we walked up to the buck my husband said, ‘Oh My Goodness, what a buck!’ It was super special, extremely special to kill a free ranging buck while hunting with my husband and son. He just didn’t imagine the buck was such a monster. We also have a lot of family and friends that hunt there so that made it really cool too.” 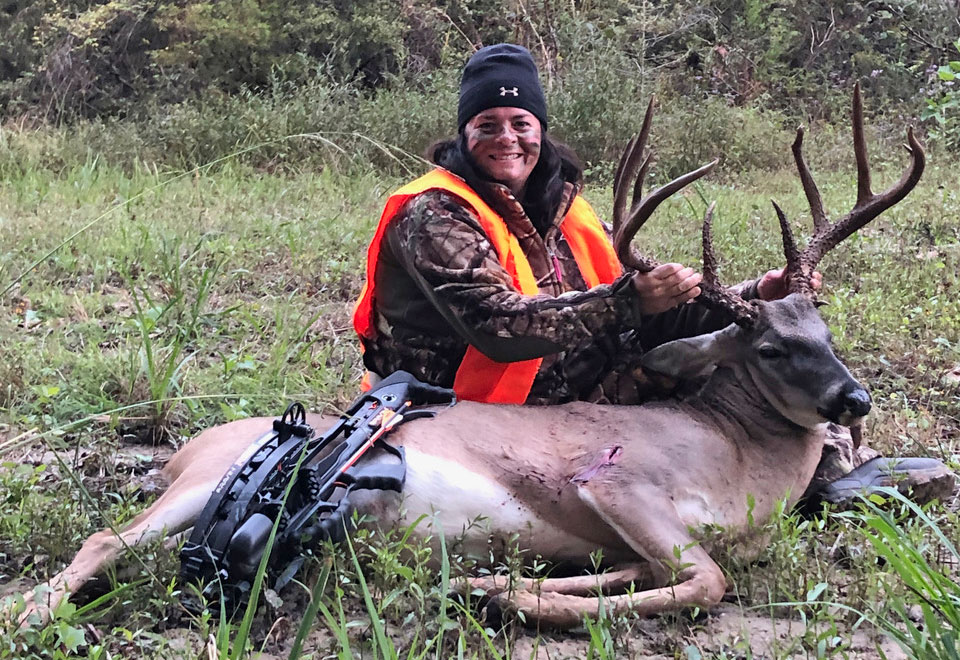 The Owens’ respect the wildlife and teach their children about harvesting deer and being grateful for the opportunity.

“Since it was youth weekend my son wanted to go to the bottom and I was going to go to another stand in their area, but something just didn’t feel right,” Owens said. “I really wanted to go down to this stand and I didn’t know why but I just felt like I needed to go down there so I went with my gut instinct, and it paid off.”