When it comes to hunting white-tailed deer, having a rifle in the right caliber and an appropriately constructed bullet can make all the difference. The terrain you hunt and the type of hunting you do determines what caliber and bullet you should use.

The ability to hit what you shoot at, however, is arguably the single most-important factor behind cartridge performance. The biggest component of this intangible factor is the person behind the gun.

I have heard gun experts give bullet placement a relative importance of as much as 70% when it comes to consistently and effectively downing game. The remaining 30% can be divided between bullet energy and bullet performance after impact, which are directly related to caliber and bullet construction.

For decades, a spirited disagreement between the advocates of small-bore, high-velocity bullets and those who champion bigger and heavier, slower-moving bullets has played out. The proponents of high velocity point to the “impact shock” that is produced by favored calibers and bullets. Likewise, the fans of bigger and slower slugs point to large entry and exit wounds they say contribute to quicker and faster kills.

Both arguments make sense under certain conditions that occur within certain yardage ranges. Because of this, a perfectly legitimate statistical argument can be made that the .30/30 at 100 yards is a better killer than a .300 Winchester Magnum at 500 yards. 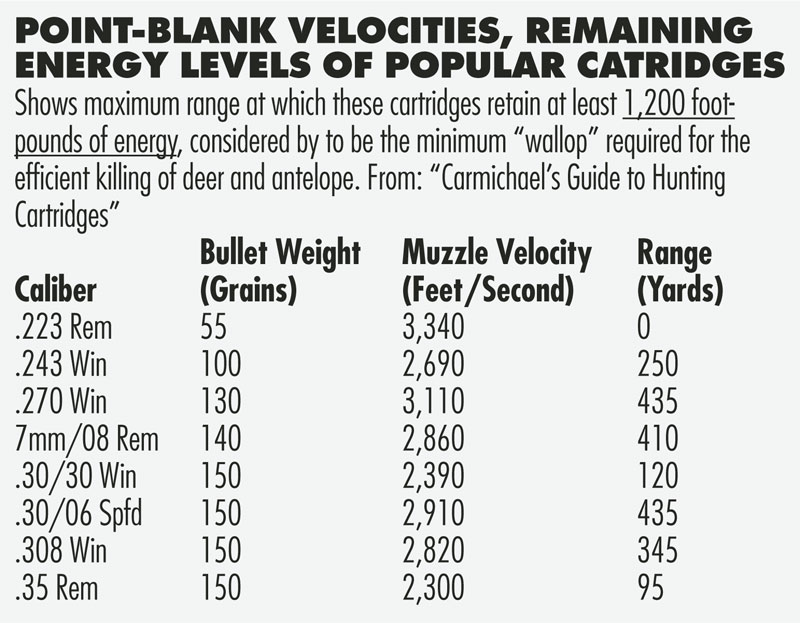 The bullet is the “point of the spear.” It is the bullet that actually puts the hole in the target or drops your trophy whitetail. Your choice of rifle is just the means of getting to the point of impact. As with many other things in life, the best bullet for the task at hand is often a compromise. Modern cartridges are usually available in a variety of bullet weights and styles.

One bullet style and weight cannot be expected to do all things well in a single rifle. Select a bullet that best fits the environment of your hunt. Whitetail habitat spans the range from wide-open agricultural fields, to close-range heavy brush. A caliber and bullet combination that works well in one instance will likely give disappointing results in the other.

The array of available bullet styles include: flat-base, boat-tail, pointed soft point (PSP), rounded soft point, ballistic tip — on-and-on. Each style has unique aerodynamic and kinetic properties that you can use to best fit the prevailing conditions of where and how you hunt.

It is a widely accepted opinion that the only caliber smaller than .25 that can be recommended for deer hunting is either the 6mm or .243, and even then, shot placement is critical. No .22 caliber cartridge should ever be used on deer or deer-sized animals. And yes, I have to admit, skilled marksmen at close range can and have dispatched deer with the .22 and .223, but the average hunter is not in that class.

A number of calibers in this range are very efficient deer killers, but at the same time, there are a number that are far too powerful for deer hunting due to excessive recoil and other factors.

Right off the bat, my short list of great choices for deer would include calibers such as the .308 Winchester, .30/06 Springfield, .30/30 Winchester, .35 Remington and the old, standby .45/70. In recent years, the .35 Whelen has regained popularity and has become one of my personal favorite whitetail cartridges.

If you were to gather 10 experts on deer-hunting calibers and bullets, you’d get 10 theories about the best choice. In my personal view, after more than 50 years in the whitetail woods, the answer is not a simple one. A satisfactory answer would involve type of rifle, bore and cartridge, bullet style and weight, hunter experience, and practice, practice and more practice.