Will this finally be the season you arrow that big buck? If not, take heart — you just might get the edge you need while bowhunting to down that wall-hanger when gun season opens.

While there are some dedicated bowhunters who have hung up their guns for good in exchange for sticks and a string, most deer hunters are eager to pick up their firearms as the early archery season comes to an end. They know the odds of scoring a good buck increase dramatically by using a firearm. Nevertheless, that doesn’t diminish their excitement and enjoyment of bowhunting. In fact, the simplicity of pursuing whitetails with a primitive weapon, and the serenity of being alone in the woods before the crowds show up, is the perfect start to a new deer season.

Some bowhunters are fortunate enough to be successful during bow season. This is the time when big bucks are less wary and can be caught off guard before the intense pressure of the gun season puts them in a nocturnal pattern. In early bow season, bucks are easier to pattern, and bowhunters who focus on reliable food sources often take their trophy before the first rifle shots of the season are fired. Some experts believe that bow season is, in fact, the best time to take a trophy buck outside of the rut.

Anyone who bowhunts knows that taking a deer with a bow during the early season is a tremendous challenge, especially in Louisiana and other southern states. There are many obstacles to success. The warm and humid conditions present in October and early November make scent control almost impossible. The sometimes oppressive heat has the deer sluggish and not moving much. Mosquitoes and other insects torment hunters. And even if these challenges can be overcome, the hunter must possess and execute the expert skills necessary to get within bow range, deliver a precise shot, and then track the downed deer. Those who accomplish all these steps have indeed earned a trophy. 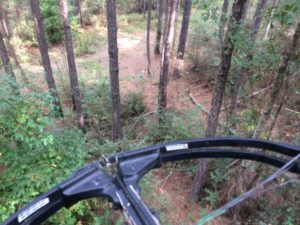 But if you are one of the many bowhunters who have not scored by the end of bow season, don’t worry. The fun is just beginning, and the time you have already spent in the woods may be just the edge you need to take your trophy during gun season.

To gain some insight into how you can increase your chances of success during bow and gun season, I spoke with Jimmy Riley, the manager of Giles Island Hunting Club. Giles Island is one of the premier deer hunting lodges in the area, and caters to both bow and gun hunters. Riley was kind enough to share some of the successful strategies he has used on his property, and the results speak for themselves.

When asked what areas bowhunters should look for, Riley said, “In early bow season, it’s all about food. Deer can be lethargic and may only move to eat. Food is very abundant at this time of the year, and a big buck may only have to move several hundred yards in order to find food. He has everything he needs in a very small area. That is why bowhunters should focus their scouting on food sources the deer are using, and will continue to use once gun season starts.”

I asked Riley what the preferred food sources on his property were? “Very early in the season, we have persimmon trees that are bearing fruit all over the island. Honey locust bean pods are another good food source that deer use heavily during bow season. Once the food plots start coming up, the deer will start coming to them — deer love the fresh growth of new plants. A little later in the season, the pecans start to fall, and the deer utilize them heavily. We do not have many oaks on the island, but the deer love the pecans.”

Deer tend to favor the same areas from year to year, so these spots are good places to start scouting. However, if changes occur in a deer’s environment, they will adapt. For example, if there are droughts, floods, timber cutting operations, agricultural changes or disruptions in natural food sources, the area you hunted last year that was teeming with deer may now be barren. When selecting stand locations, Riley cautioned, “Deer do not always follow the same pattern from year to year. The game can change, so you have change with it.”

When scouting for a stand location, keep in mind that you may want to continue to hunt the same area during gun season. Some bow hunters set up a bow stand that allows for a shot within bow range, and they also set up a stand for gun hunting further away, so the hunter doesn’t disturb that area.

When asked about the stand set-ups at Giles Island, Riley said, “We use all types of stands here. We have about 150 Millennium ladder stands throughout the property. We also use two-piece climbing stands for our guests who can safely use them. Pop-up ground blinds are used, as well as natural ground blinds. In fact, one of our best bucks was taken from a natural palmetto ground blind. Box stands are also available if the weather is bad.”

Riley has many stands to choose from, but he only selects the stands that are receiving the most activity for his guests to use, based on trail cameras and scouting.

When asked about the most common mistake bowhunters make, Riley responded without hesitation. “It has to be not paying enough attention to the wind. No matter what you do or spray on you, when the wind is wrong, a deer will smell you,” he said. “Some hunters will hunt a stand when the wind is wrong, and that is a mistake. It would be much better to stay home and cut the grass and wait for the right wind to hunt that stand. If you bump a good buck out of your area, you may never see him again.” 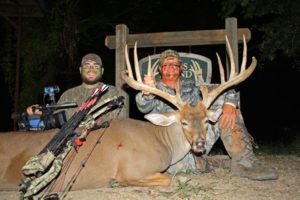 Bowhunters should consider setting up at least two stands for various winds. In my experience, the prevailing wind during October usually has an easterly component, so my primary stand faces east. Cold fronts switch the wind to the west and north, so I have a secondary stand that faces west. Thermal winds should also be considered if you are hunting in hilly country. If winds are light, the morning thermal winds rise, so setting your morning stand at the top of a ridge is preferable. Conversely, in the afternoon, the thermal winds sink, so setting up at the bottom of a ridge can be an advantage.

Those who bowhunt in the south know that warm weather and insects are usually a part of early season bowhunting. We all have experienced what it’s like to arrive at a stand dripping in sweat, only to battle bugs once you are set up. It can really make a bowhunter want to give up until cooler weather arrives. I asked Riley how they deal with these factors at Giles Island.  “We use Thermacells and really watch the wind,” he said. “You simply can’t have a hunter swatting at bugs and expect him to be successful.”

Some other suggestions for dealing with the heat are to try to limit the distance of the walk to your stand, to take your time walking so you don’t work up a sweat, and wear fabrics designed to wick moisture. Also, it never hurts to try to arrange your schedule to hunt on cooler days — if there are any.

Riley’s final thought about participating in the early bow season is that you may just happen to get your first glimpse of a trophy buck.

“There are bucks out there that don’t always walk past your trail cameras, but you may see them when you are bowhunting,” Riley said. “This happens all the time. You really want to be careful not to bump these bucks out of the area. You can get by with bumping an old buck once, or maybe even twice, but the third time — he is gone — probably to someone else’s property.”

If you happen to run into a monster buck during bow season, you may want to consider easing out of the area and staying out until the opening day of gun season. If you are fortunate enough to take him then, you may look back and say that bow season was a prelude to success.

About Capt. Steve Himel 70 Articles
Capt. Steve Himel has hunted and fished in Southeast Louisiana for over 45 years. He operates Marshland Adventures, LLC and has been a freelance outdoor writer for the past 16 years. He is a member of the Louisiana Outdoor Writers Association.