As the peak of breeding season arrives in whitetail country, hunters can go on the offensive and use all the tools of the trade to connect with a buck.

If a hunter wants to connect with a good, adult buck during deer season, what would he do?

These are some good answers, and they could spell success, but a hunter’s best bet is to hunt the rut, when an adult buck throws caution to the wind as it becomes involved in the annual breeding cycle of the whitetail. Most hunters would agree that the rut, the peak of the breeding period for deer in their areas, is a key time to be in the woods.

Count the Stafford clan from Franklinton in that group.

Jimmy Stafford is best-known for his work as the wild-turkey biologist for the Louisiana Department of Wildlife and Fisheries. He was mentored by his father, the late Dr. James Stafford, who hunted all over Louisiana. Jimmy Stafford’s sons, David James and Brandon, have followed in his footsteps, excellent hunters who are working for wildlife agencies. They grew up hunting on Pearl River WMA and have learned well from their elders.

Jimmy Stafford and his son, David James, agree that the rut is, by far, the best time to kill a racked buck.

How does the rut work? Louisiana Sportsman annually publishes a prediction of where and when the rut will peak across the state. It generally occurs during a period of two months. The peak is the best time to hunt, because bucks are very active, and usually, around 80% of the does in a local population will be bred, the remainder being bred during the second month. If a local buck population is well managed, a hunter can still find good rut activity during the second so-called peak, as bucks compete for the remaining, unbred does. On several occasions I have seen as many as four bucks chasing a single doe during this period of time.

David James Stafford, who grew up hunting in Area 4, southeast Louisiana, moved to northwest Louisiana (Area 2) for a few years and saw first hand how different the rut was. He learned that when the Area 2 season opened, the rut was on, and it was time to be in the woods. In Area 4, the early pre-rut was still taking place, and deer activity was hit or miss. He believes hunting the period when scraping and chasing takes place is better than hunting when deer are breeding. When the actual breeding begins, deer just seem to disappear. How many times have you been hunting and watched a buck breed a doe?

David James Stafford now lives in Area 1, and you can bet that’s where he will be hunting in January.

When scraping is serious

I think the scraping period is a great time to find an adult buck. A trail camera set near an active scrape will point out the buck activity. I have had good success setting up in areas near scrapes and calling up bucks with a bleat or grunt call. David James Stafford believes in using deer calls and said being vocal is a must. I generally will utilize several different calls and will call every 15 to 30 minutes. I’m not sure you can call too much unless the buck is watching you call. A buck will either be interested or indifferent to the call, depending on his activity status. 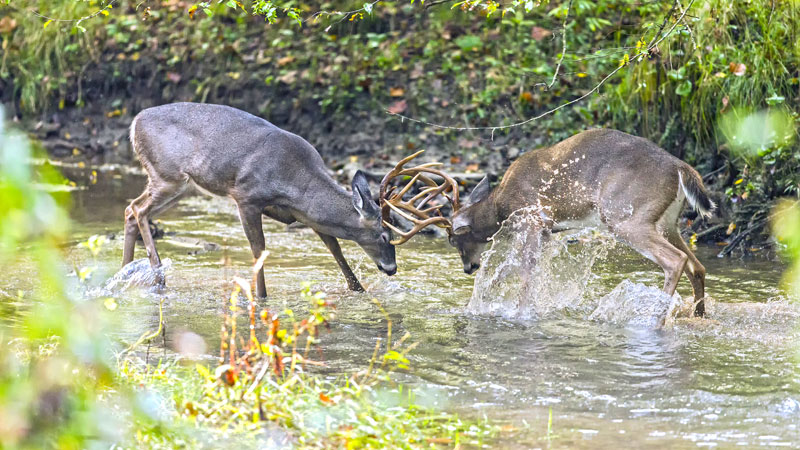 Both David James Stafford and Jimmy Stafford also incorporate rattling into their hunting efforts. The best time to use these tactics is when bucks are moving around, checking scrapes and looking for does that may be coming into estrus. David James Stafford likes to hunt well into the morning, especially if the temperature and barometric pressure are right: below 60 degrees and 30 inHg or higher.

Jimmy Stafford found scrapes this past October on family property in St. Helena Parish. No doubt these were pre-rut scrapes; scrape initiation takes place during the pre-rut, and bucks will make scrapes but won’t bother going back and checking them. In November, bucks will become serious about scrapes, working and checking them. When you get photos of the same buck on the same day or the next day, the scraping activity is on. This activity will begin to wind down toward the end of November, and then, the chase is on.

Be vocal, use scents

A buck will begin following a doe several days before she stands for breeding. The buck will be grunting as it follows the doe, and hunters can hear this. This is why grunting can be very effective, along with a bleat call. Can calls that imitate an estrus bleat can be used at this time, but one can use a regular bleat call and drag it out to imitate the sound a can makes.

This is also the time to use deer scents such as doe urine. Keep in mind that there are new regulations pertaining to the use of urine, so stay legal. All urine must have been tested for CWD, and it should say that on the label. I generally do not make fake scrapes; instead, I will just make scent bombs that I hang in various places around the stand I am hunting. This works extremely well, especially when a buck is on the prowl and looking for a doe.

When hunting, pay attention to wind direction and make your setup accordingly. Hunting the consistent winds, such as a north wind when a cold front passes, is a must. Keep in mind that a buck will often approach from downwind as it moves in to investigate. David James Stafford pointed out that deer travel transition zones as they move from bedding to feeding areas; keep this in mind when making your setup. Does will continue going to the feed trees, and where the girls are, the boys generally follow.

Moving through bedding areas to reach your stand may disturb deer, so utilize a map when determining your best approach. The Staffords likes to use waterways — sloughs and bayous — to ease into their hunting territory. Jimmy Stafford has been doing this for years on Pearl River WMA, and David James Stafford has used it to his advantage on Bodcau WMA and the Caney Ranger District in northwest Louisiana.

Take advantage of does

Louisiana hunters can take an antlered buck and an antlerless deer on the same day. On several occasions, I have watched racked bucks following does, and for various reasons, I have shot the doe and not the buck. The bucks would approach the downed doe and paw and hook her. Apparently, the doe was close to her breeding time, and the buck did not want to leave. During the breeding period, the buck is focused on the doe and is oblivious to just about anything else. David James Stafford said when he hears chasing activity, he heads straight to them and doesn’t worry too much about making noise. He believes the deer think it’s just another deer moving in to investigate.

During the rut, when you see a doe moving through the woods, keep an eye open for a trailing buck. On a managed deer hunt, Jimmy Stafford and his father were walking to their stand when Jimmy spied a doe. Wanting his father to kill a deer, he pointed her out and told him to shoot. His father saw the deer but did not raise his gun. Jimmy told him to shoot before it ran off. Finally, his father raised his rifle and fired. The doe ran off, and Jimmy told his father he had missed. His father disagreed and walked to a nice 8-pointer on the ground. Jimmy Stafford’s focus had been on the doe; he had not seen the buck that was trailing her.

The Area 1 and Area 6 ruts take place in January, so there is plenty of time to connect with a buck during the rut in these areas. The rut is on in Area 4 and Area 9, and the smart hunter should use all the tools in his bag to connect with a racked buck. The second round of breeding activity will be going on in Area 4 and Area 9 in southeast Louisiana in January. The true trophy bucks in Louisiana are in Areas 1 and 6, and hunter success in these areas is generally an indicator of how good the deer season was. Hunt hard, but be safe.

Fix your boat and trailer before anything breaks

April is a favorite month for many anglers, and it’s also a month when a lot of people break down, either with a flat or a stalled motor. […]

Tips to preserve fish for mounting

Larry Matherne, owner of DeeDee’s Taxidermy in Barataria, offers some tips for preserving a fish for mounting. […]

May: A Kayak smorgasbord

While good kayak fishing can be had year-round in coastal Louisiana, May could be the best month for comfort and variety. […]

About Dave Moreland 230 Articles
David Moreland is a former wildlife biologist with LDWF, having served as the State Deer Biologist for 13 years and as Chief of the Wildlife Division for three years. He and his wife Prudy live in Baton Rouge and own property in East Feliciana Parish.