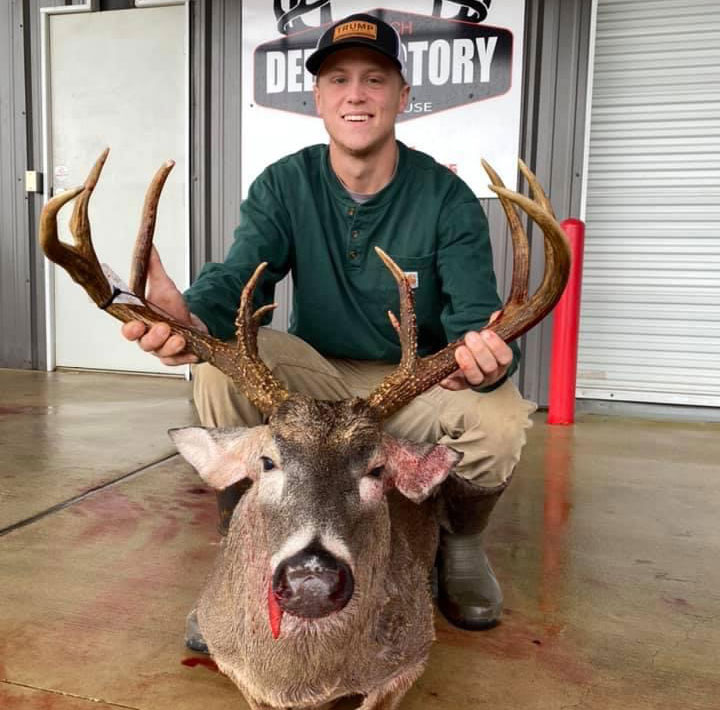 Riley Smith had no real idea he had any chance of killing a trophy buck when he got up early on Nov. 7 and headed from his home in Ruston to hunt a piece of property near Spearsville, despite having trail-camera photos of a big, wide buck.

Nope, he was on a mission to fill his freezer.

“I was really just going to kill a doe to put meat in the freezer,” admitted Smith, 22.

Oh, yeah, at 191 pounds, the buck put plenty of meet in the Smith freezer.

Three years in the making

Smith had been in a 6×6 box blind two feet off the ground looking down a long shooting lane in a pine thicket on the Union Parish property. Two years ago, on Nov. 4, he’d taken a 19-inch, 7-point buck from the property, and he said he’d been looking at trail-cam photos of a bigger buck from 2018, 2019 and 2020.

“I had been watching him for three years on the camera, feeding corn and rice bran,” Smith said. “I had been in my stand for about 45 minutes, when he came out right to my feed pile, about 200 yards away.

“It still wasn’t real light, but he kind of turned just right so I could tell he had horns, then he turned his head again, and I knew it was the big buck. I shot him, and he dropped right in his tracks. It was a pretty easy hunt. I didn’t even have time to get nervous.”

“I wasn’t expecting that buck to come out,” he said. “I hadn’t had a lot of pics this year. But he was the first thing to come out that morning.”

Smith’s buck had a dark, almost chocolate-colored rack with plenty of mass and tines as long as 8 inches. The most-impressive feature was its width: 22 inches inside. The buck’s horns look like they’re 6 inches outside the ends of both ears.