Wahoo and tuna, in spite of their large size, do not have large heavy bones.

Wahoo of any size are cleaned by Ricky Richoux of Slimeslingers Professional Fish Cleaning with only his F. Dick Stiff blade. He will occasionally use his Dexter Russell Tiger Edge blade to cut through the rib cage of tunas, depending upon his need for speed and how badly he wants to protect the edge of his stiff blade.

Calling these fish “delicate-boned,” Richoux emphasized that even large specimens do not have the heavy bones of redfish, drum, snappers and amberjacks.

The 6-inch blades of the F. Dick knives are adequate to clean even the largest tuna that show up on his cleaning table.

First cuts are always made with just the tip of the knife. On the second and later passes he cuts deeper. Smaller and shallower cuts, rather than one deep cut to loosen flesh from the carcass gives better knife control and reduces the amount of flesh left behind on the carcass. 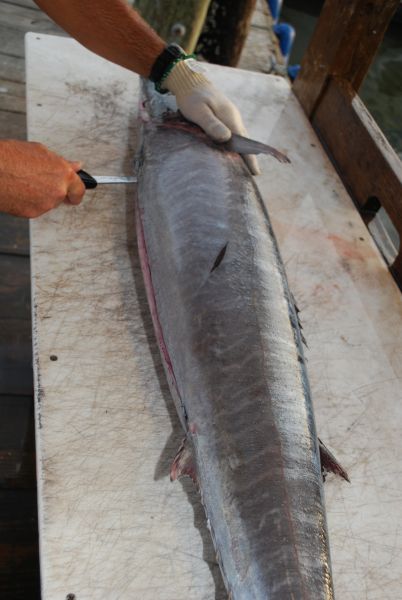 Step 2: Grasping the pectoral fin of the fish with one hand, insert the knife immediately behind the bone and cut toward the belly to meet the first cut. 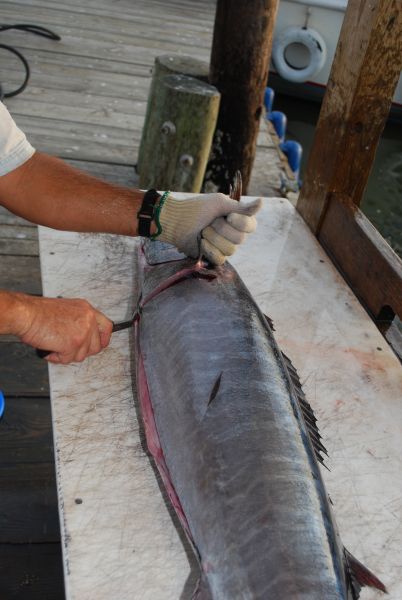 Step 3: While still holding the pectoral fin of the fish, extend the cut to the back of the fish. 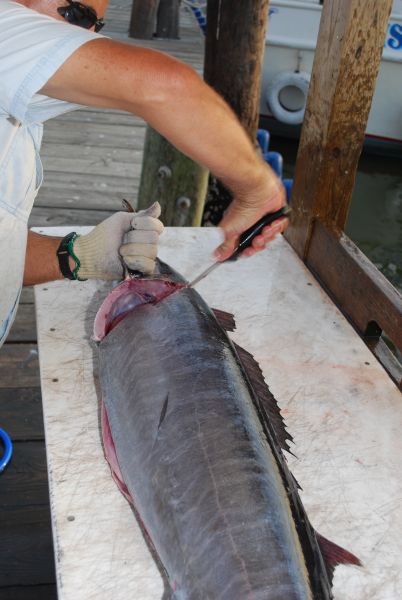 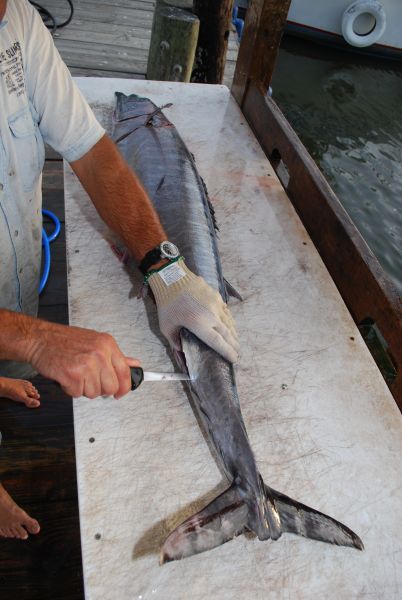 Step 5: Near the tail, push the knife through the body of the fish and finish the cut, freeing the tail end of the fillet. 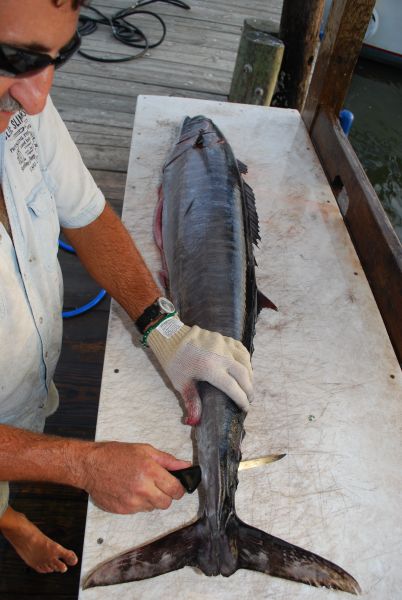 Step 6: Turn the fish around and using the same inch-deep cutting method, cut the entire length of the fish along one side of the dorsal (back) fin. 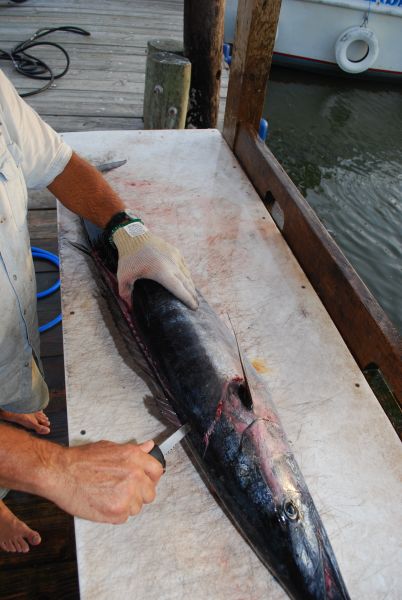 Step 7: Deepen all the cuts, effectively freeing the fillet, except for the rib cage, from the carcass. 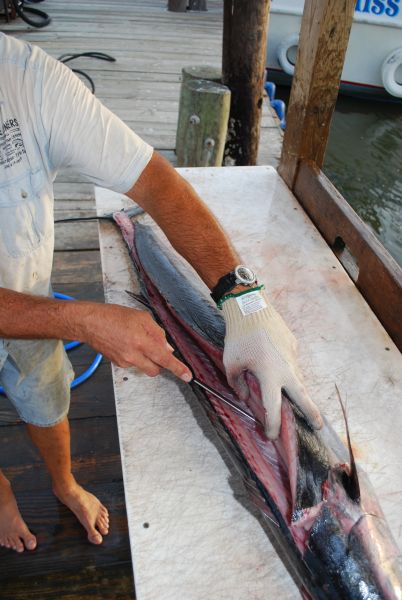 Step 8: Cut through the bones of the rib cage. 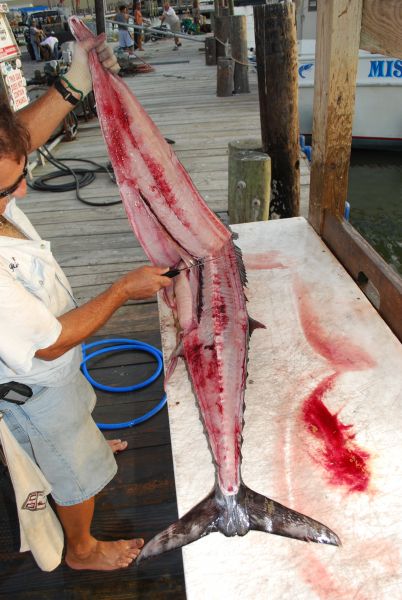 Step 9: Set fillet aside and repeat the filleting process for the other side of the fish. 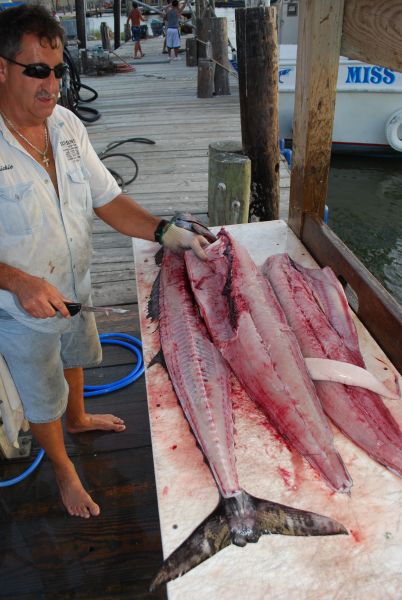 Step 10: After cutting out and discarding the rib cage, cut near and to one side of the center line of the fillet along its length, separating it into two pieces. Set aside the piece without the darker center-line (blood line) flesh. 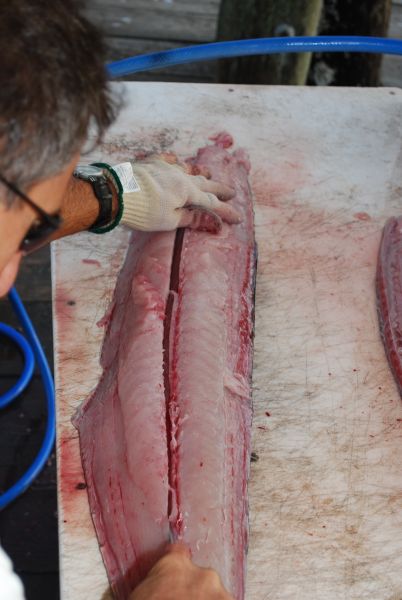 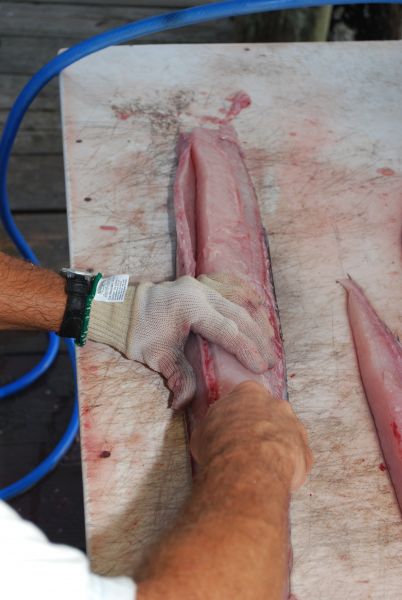 Step 12: Skin the fish by cutting vertically through the strips at approximately 12-inch lengths, then turning the knife sideways to cut-scrape between the skin and flesh. 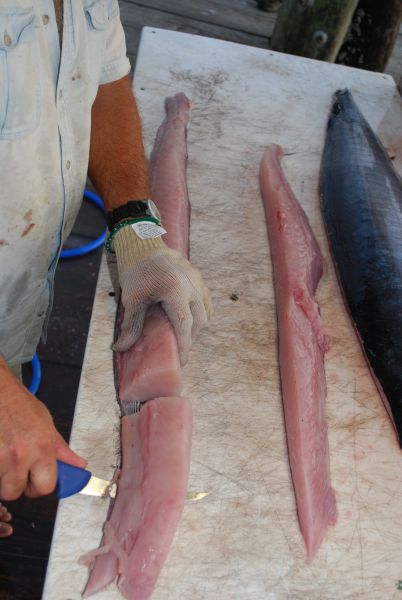 Step 13: Trim any remaining red flesh off the loins and discard it. 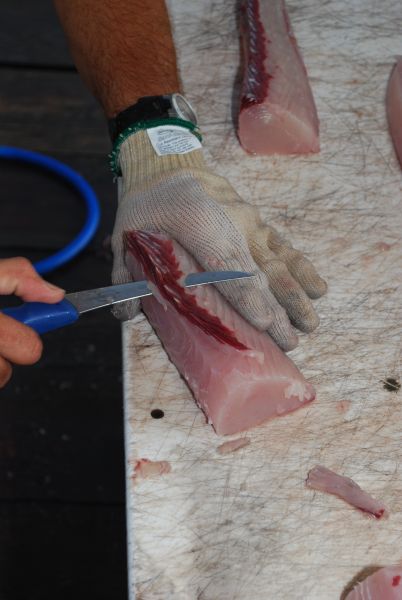 Step 14: The finished loins are now ready to be cut cross-section into steaks for cooking. 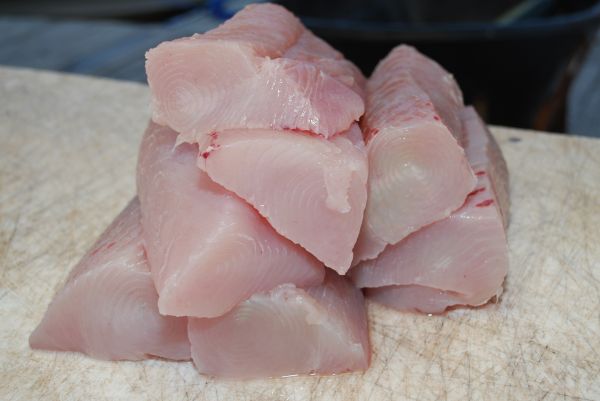