As with redfish and drum, their heavy bone structure and large scales make fine cuts difficult, resulting in large amounts of delicious flesh left to be discarded on the carcass.

Richoux will use all three of his knives for cleaning snappers; the bulk of the work will be done with the F. Dick Stiff blade.

Cleaning cuts are initially made shallowly to break the skin. These are followed by deeper cuts, made with short strokes, to free the fillet from the carcass.

Cutting through hard, heavy snapper rib cages will quickly dull a knife, so he turns to his Dexter Russell Tiger Edge knife for the task.

If the fillets are to be skinned rather than left on the half-shell, he will use his F. Dick Flex for the job.

Cleaning snapper throats, the part of the fish he said he likes best, is a specialty of Richoux’s.

“There was a time,” he says, “when you could go to New Orleans and order fried snapper throats. You don’t hear much of it any more.”

A “snapper throat” is the area where the paired pectoral and pelvic fins meet, where if fish did have a throat in the mammalian sense, the throat would be.

The muscles there, while well-developed to help the fish maneuver its fins, receive little exercise, resulting in what Richoux calls “tender, sweet meat.”

Step 1 – Thoroughly scale the throat area where the pectoral and pelvic fins meet. 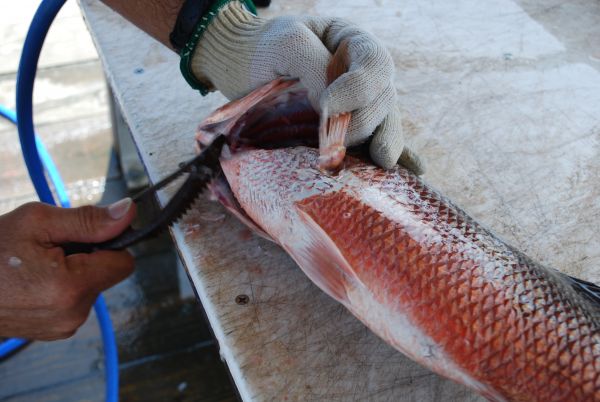 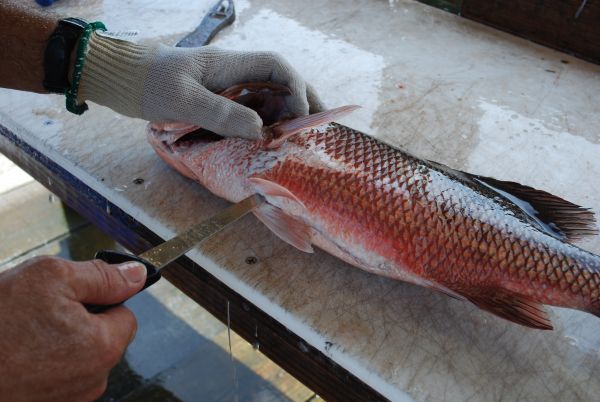 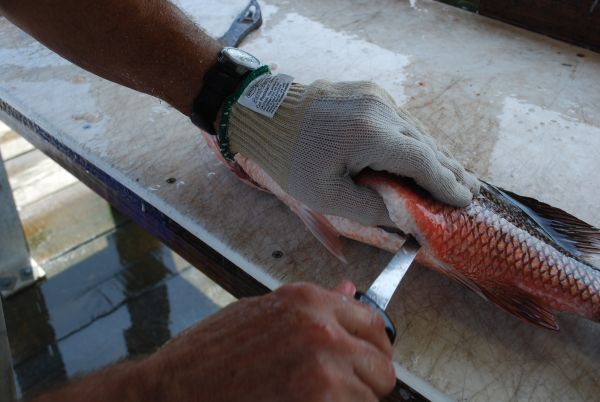 Step 4 – Cut deeply to the backbone behind the head of the fish, angling the blade slightly to edge it beneath the scales rather than trying to cut through them. 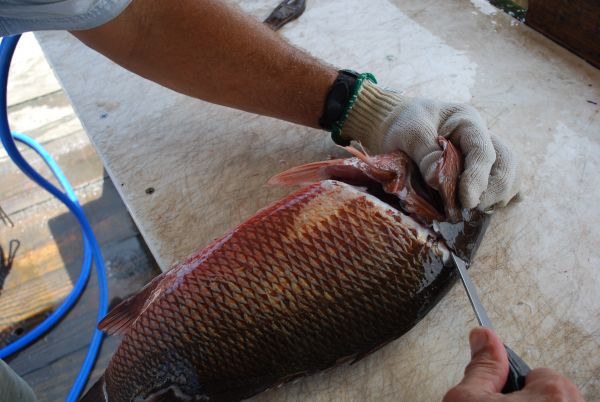 Step 5 – Cut shallowly the length of the fish starting in the groove that lies close to the dorsal (back) fin. 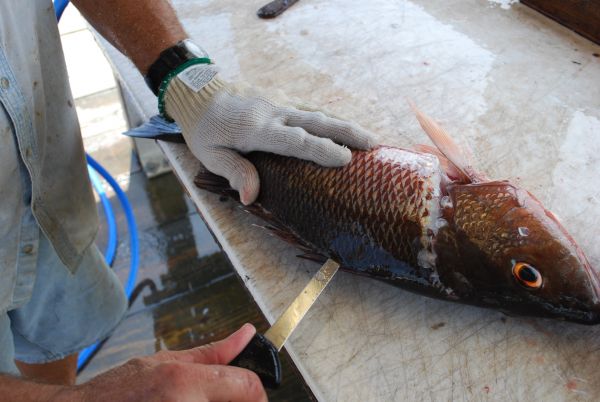 Step 6 – With short precision strokes that ride the contours of the backbone, free the entire fillet except for the rib cage from the carcass. 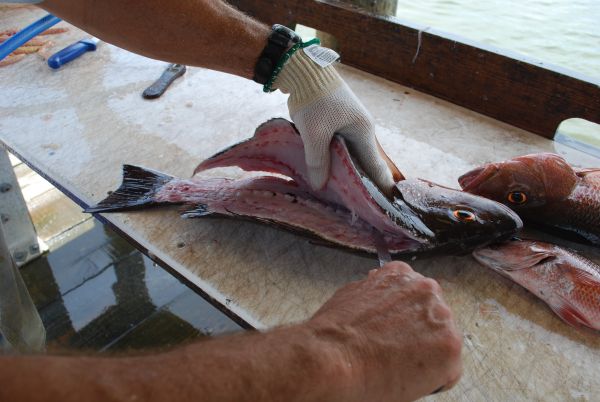 Step 7 – Make the final cut by using a serrated blade to cut through the rib cage bones. 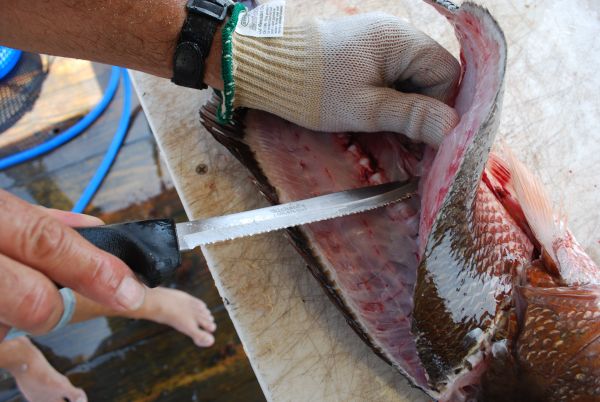 Step 8 – Repeat the filleting process for the other side of the fish. 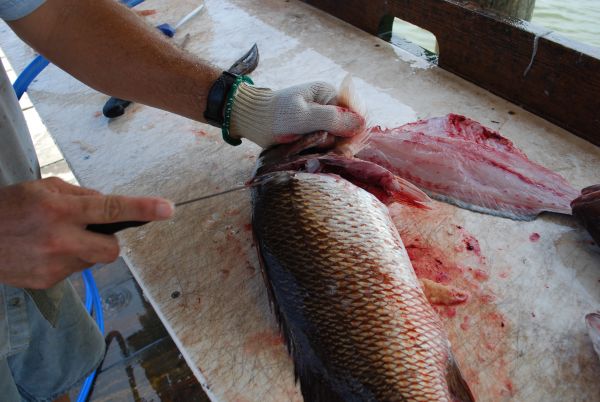 Step 9 – Insert a serrated knife as far forward as possible through the gill openings of the fish and cut upwards to free the throat from the head. 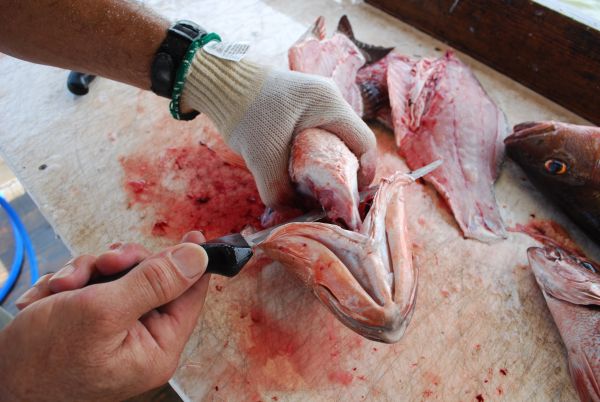 Step 10 – Holding the head of the fish down with the knife hand, grasp the throat with the other hand and wrench it loose with a twisting motion. 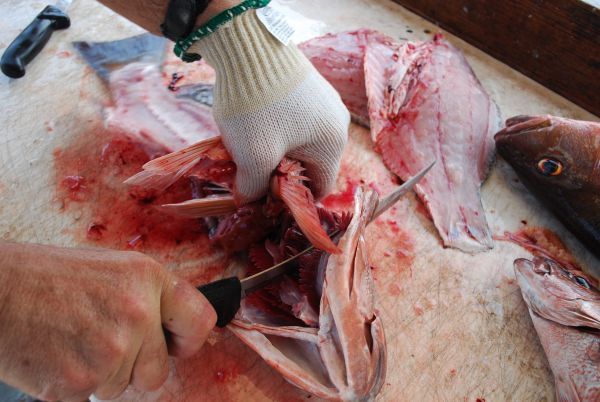 Step 11 -The finished throats should be fried with the fins still attached. 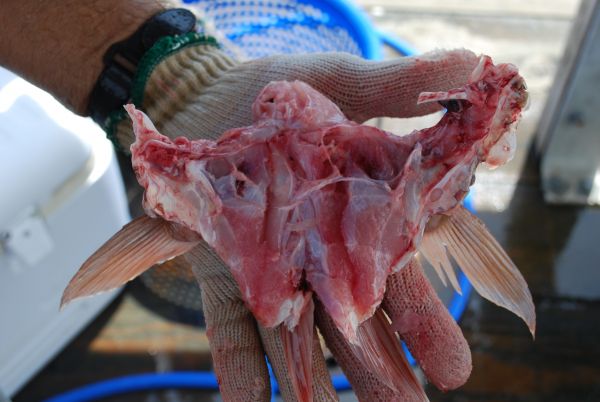 Step 12 – Return to the fillets and trim out any bones left in them. Pay particular attention to the spot where the mid line of the fish ends at the front of the fillet. 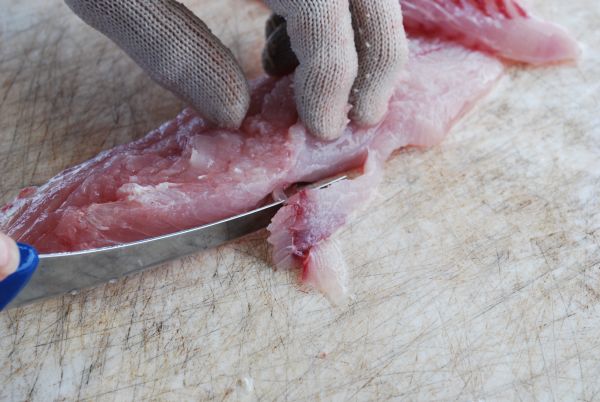