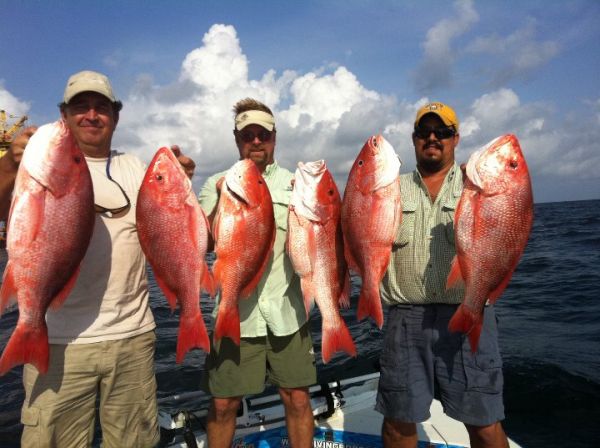 Many red snapper trips are made on offshore boats equipped with two or three outboard motors to handle windy weather, gunwales tall enough to keep everybody safely aboard and room enough for large groups of anglers to fish without constantly stepping on each other.

However, that’s not the only way anglers can reach the snapper rigs typically found in 50 to 60 feet of water out of Cocodrie.

Take Capt. Eric Dumas for example. This accomplished Lake Pontchartrain fishing guide got tired of watching everybody catching limits of snapper last year, so he figured out a way to make it happen for himself in his 24-foot Ranger bay boat with a single 250-horsepower outboard motor.

“We weren’t the only bay boat out there last summer,” Dumas said.

But there are some issues to be dealt with when fishing from small boats.

“First you got to watch the weather for a calm summertime pattern,” Dumas said. “Then, you just got to find your fish. I used my Humminbird to find them with the side-scan sonar by idling around the rig to see which corner they were on.”

Dumas and his buddies ran about 15 miles south of the beach, but before launching they always visited the NOAA Web site to look at the marine forecast. They found it accurate more often than not, and Dumas paid particular attention to how far out calm water would reach.

“It tells you it’s going to be blowing 5 knots all smoothed out to 60 nautical miles,” Dumas said. “They got 20 nautical miles, 60, 80, and 120. They’re normally pretty close to being right, but once you get to a summer pattern during snapper season you’re going to have a stretch of weather where it’s smooth every day. Then it gets hot and the thunderstorms start popping up, and that’s what you’ve got to watch out for.”

Dumas learned to leave his outboard motor running and kept bumping it in and out of gear to help stay on the fish and to make sure it wouldn’t leave him stranded.

Although Dumas and his friends quickly caught four-man limits of snapper on all three trips they made last summer, they didn’t bother much with chumming.

Instead, they dropped dead pogies down to the bottom and bumped them up about 2 feet at a time until they got in the fish.

“If you make a trip like this, don’t forget to bring your trout rods,” Dumas said. “On every snapper trip we made last summer, we stopped at the beach on the way in and caught limits of trout under the birds.”