Bobby Terrebonne maintains that finding red snapper is not a big problem.

“Target oil and gas platforms in 100 feet of water or better,” he advised. “Any given platform will hold red snappers at one time or another, but some are better than others.

“Asking lots of questions of other anglers will help locate the better ones.”

Terrebonne stressed the importance of having a good depth sounder and being familiar with it because red snappers will suspend off the bottom.

“Look for the echoes of the fish on the screen, and then fish at the depth they are at,” he said. “Don’t just drop to the bottom.”

He explained that fishing depth can be approximated one of two ways.

First is to strip line off the reel in 2-foot lengths, counting each strip until the bait is at the desired depth. The other method involves lowering the rod tip to the water, and then, with the reel set on free-spool, pumping the tip of the rod up with authority until it is a little over 75 degrees in angle; each strip takes about 10 feet of line off the reel.

Bait choice is simple. Although he does use squid — which he likes because it stays on the hook well — occasionally, his most common baits are frozen (and thawed) pogies and live croakers.

Red snappers are aggressive feeders and readily take pogies, but live croakers have the advantage in being a deadly bait for catching mangrove snappers, something Terrebonne turns to as soon as he fill his customers’ red snapper limits.

Fresh, bloody cut bait is also very effective for red snapper. Usually the first hardtail or bonita that is caught is cut up for bait and is often used in large chunks to attract large red snappers. 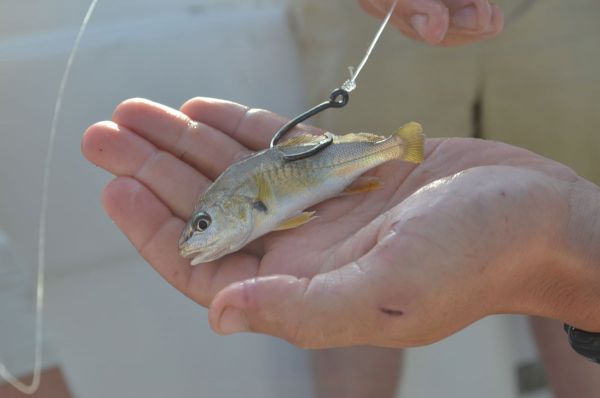 Although Terrebonne typically hooks up to a platform with an aluminum rig hook, he cautioned that quite often bigger red snappers will hold well away from the platform itself. When he sees this, he will hold the boat in position with its engines while his customers fish with his deck hand’s assistance.

A big no-no in Bobby Terrebonne’s book is not having enough boat under one’s butt to get far enough out to fish red snapper.

“A common mistake people make is coming out here in small boats. To me, anything under 25-foot is too small,” he said. “A lot of people come out here in bay boats. I think they are crazy. Or they come out with one motor on their boat and break down.

“They don’t know how bad the weather can get.”

Terrebonne feels no reason to range farther than OCS Region West Delta in the east, Grand Isle in the center and South Timbalier in the west.