Do you have to have live bait when fishing offshore? Well, it doesn’t hurt. But choose the right jig for the job, and you could be fighting bigger fish — and getting reaction bites even when those fish aren’t feeding.

It’s a fact of life.

Drop a piece of bait over any structure in the northern Gulf of Mexico, from the Midnight Lump to the countless wrecks and reefs to the legs of any drilling rig, and something is gonna eat it.

But is that something always something you want to catch?

There are a bunch of sharks and jacks out there, you know.

Well, the easy way will also yield plenty of snapper, grouper, cobia, amberjack and tuna — but for precision targeting, for efficient time management, for the ability to weed out a lot of the riffraff, big jigs are a tool no offshore trip should exclude.

• Bare Leadheads. Fitted with curlytail or paddletail bodies, these straightforward, utilitarian jigs are light on fancy but heavy on effective. Trolling models have narrow noses, while the ball-head style works best for vertical drops.

• Bucktails. A dressed-up version of the basic leadhead, hair or synthetic fiber skirts pulse in the water and add a lifelike appearance.

• Diamond jigs. Faceted like the precious gem but long and thin in form and made of polished metal, this jig hangs a treble hook on a split ring from its aft end.

• Blade (aka Speed) jigs. Flat-sided metal forms made to cut through the water for fast up-and-down action. One or two short-shank hooks dangle via harnesses from the top eye, with a optional stinger harness rigged to the jig’s bottom end for extra grabbing power.

Probably a good representative of most northern Gulf anglers, Capt. Billy Wells of the Mexican Gulf Fishing Company out of Venice likes blade versions, particularly the Shimano Butterfly jig. But no matter which type of jig you use, Wells noted, these lures offer viable options for days when you can’t find live bait or when a hot bite exhausts your supply.

“A lot of times, like with snapper, a jig will produce larger fish than a piece of cut bait,” Wells said. “I think the smaller fish may be a little more timid; they’re not willing to chase something away from the rig. They’re waiting for something slower, easier to catch.”

Wells said a jig is also a good tool for reaching deep fish that won’t rise in the water column.

A good example: if he marks a school of tuna holding deep that chumming won’t get to rise, firing a shiny jig into their midst often triggers a bite.

“On those super-calm, slow-current days, you can drop the jig down on top of them, and, if you have a good fish-finder, you can actually watch the jig go down, and you’ll see the tuna start following it down,” Wells said “That allows you to work the fish up and down because you know the jig is in the fish.” 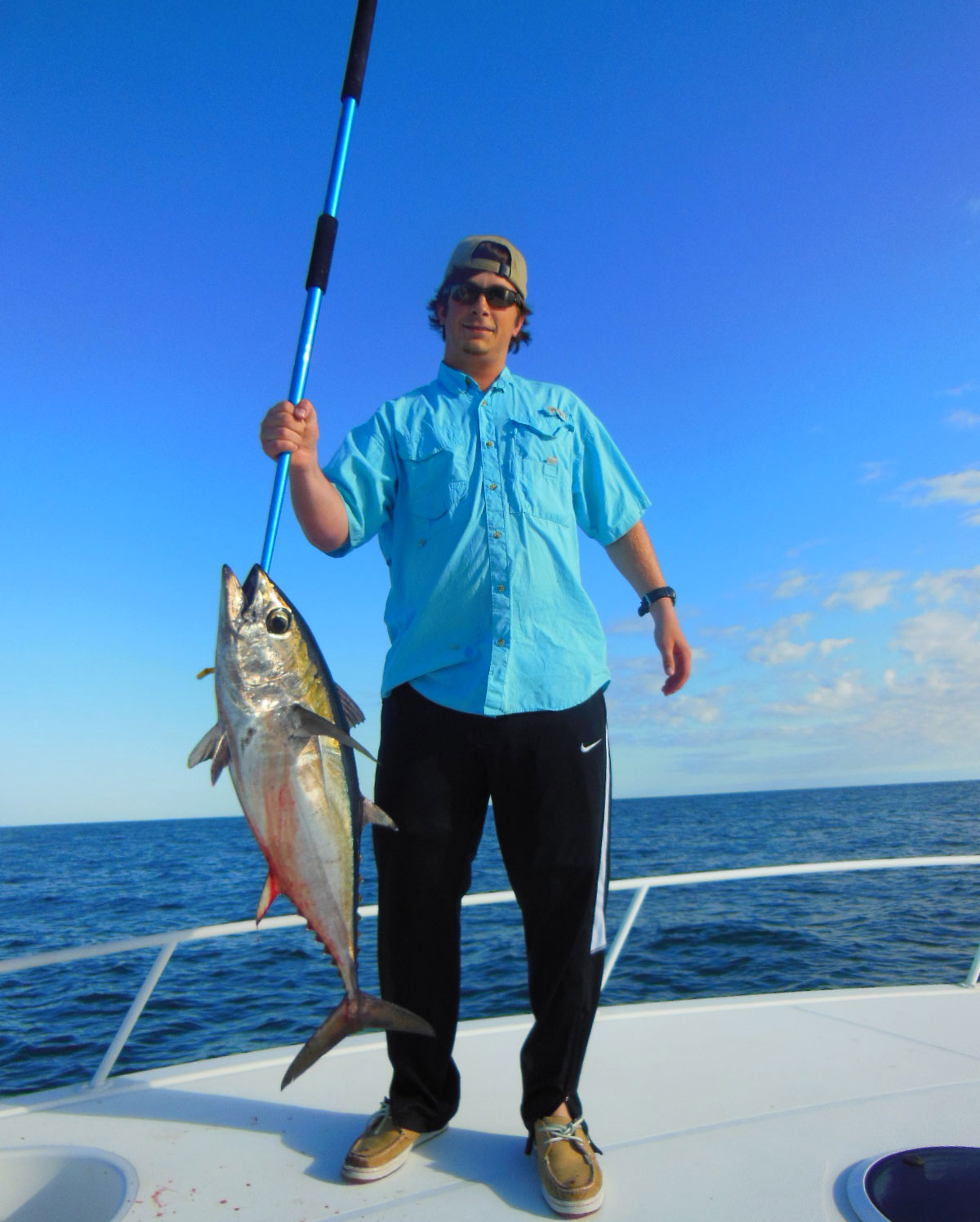 For this tactic, Wells likes PowerPro Depth-Hunter braided line, which features alternating 25-foot segments of blue, yellow, green and orange with a black marking every 5 feet for accurate and immediate depth measurement.

“You’re basically just trying to get a reaction strike,” Wells said. “When those tuna are just kind of sulking down there, you can drop a live bait right in them, and they won’t eat it.

“They’re not feeding, but they’ll bite the jig just to make it go away.”

There are two schools of thought on presentation.

First, a jig can be essentially a transport mechanism for natural bait: a chunk of squid, a dead cigar minnow, a strip of bonito belly. In this case, you’re swapping a lead-and-hook fish-finder or knocker rig for a streamlined, all-in-one package that adds profile and presence to the meat.

Lead heads, bucktails and Lucanus-style jigs do a good job here — although they can also tempt fish without any natural bait being added.

Keep the action moderate when bait’s involved, but add a little pep to the step with standard jigs (tails included here).

Second, when using a diamond or blade jig, you want to work up a sweat. Wells said you just can’t overdo it when you’re trying to imitate a terrified baitfish.

“It’s an active style of fishing — you have to want to do this,” he said of the exaggerated, side-to-side ripping style necessary for a convincing, tempting presentation with the slender chunks of metal.

Wells stressed that effective metal jig presentation requires much more than submersion. Will a big sow snapper or beast AJ intercept a jig on a dead fall? Sure, it happens. But, you’ll enjoy greater consistency when you jig it like you mean it.

“It’s very tiring to work these jigs the right way,” Wells said. “The biggest mistake I see people making is not working them hard enough.

“You can’t be (lackadaisical); you can’t just drop it down and wiggle the rod tip a few inches. If you get worn out, it’s better to just make a few drops where you jig it the right way, take a rest and then pick up that jig rod again.”

Think of it this way: You’re trying to imitate a baitfish fluttering and struggling in the water column. If that baitfish spots a set of jaws headed his way, how’s he going to respond?

Make your jig look like that terrified baitfish and you’ll get plenty of attention.

Built with an amazingly flexible tip for heavy jigging without excessive exertion, such specialized jig rods also pack the power to whip a big fish way down deep.

On the bite, Wells said it’s time for battle.

“You really need to stick that hook (firmly) with several hard sets, and then maintain the pressure,” he said. “This is where your braided line is helpful. I use 80-pound braid, and I tighten down my drag.”

Past the solid hookset, your sole objective is halting the fish’s forward progress. Whether it’s a reel stripped by a blazing tuna or a line snapped on a rig leg, you simply must put the brakes on your fish.

Strong side pressure is the most-basic tactic. Lean away from the fish and hold the rod tip at a high angle. Direct, vertical pressure isn’t necessarily wrong, but this just creates a tug-of-war between you and the fish.

It’s better to add the challenge of directional pressure, as this forces the fish to fight the vertical lift as well as the diagonal influence.

Also, do what you can to increase the angle by running to the other end of the boat or moving the boat away from the rig, wreck or whatever structure you’re jigging.

Motor drifting past a rig or backing into the fishing zone affords you the advantage of surging away from the structure when someone hooks a big fish.

When working the rigs for big redfish, Capt. David Iverson starts upcurrent of a rig and uses his trolling motor for controlled drifts past the structure. Minor adjustments keep him at a good fishing proximity with the proper angles for pulling fish out of the structure.

Reds of the rigs

Capt. David Iverson typically runs out of Red Pass and targets bull reds in 40 to 50 feet of water around West Delta rigs. However, when he’s up for a challenge and the weather permits, he’ll take South Pass out his favorite East Delta rigs, where close proximity to the Continental Shelf puts 300-foot water wells within the reach of his bay boat.

But wherever he ends up, he said jigs are really efficient baits.

“I believe in covering territory, and you can cover a lot of territory with a jig,” Wells said. “The fish are very seldom just all over a (drilling) platform. Usually, they’re on an area of the platform.

A ¾- to 1-ounce Bomber Saltwater Grade jig with a large, glow curlytail is his favorite. The luminescent appearance is a real fish-getter in the depths, Iverson said, but it’s also a great sight-casting bait when the big, brown shadows appear.

“If you see a cobia out there, you just hurl that baby out there, and they’ll eat it,” Iverson said. “Glow is just a deadly, deadly color.”

Iverson casts upcurrent and let his bait fall through the strike zone.

In a swift current, attempts at vertical presentations only end in frustration, as the water blows your bait off course. Similarly, casting downcurrent leaves you fighting the flow to gain any meaningful descent.

Throw upstream and work with the water, not against it.

“I don’t like fishing with anything heavier than a 1-ounce jig, and if you throw downcurrent, it’s harder to get it to the bottom, unless you use a 2-ounce jig,” Iverson said. “I throw upcurrent, let it bounce underneath you, pick it up and do it again.”

Iverson said jigging serves him well, because he usually finds the redfish suspended down near the bottom.

When he ventures out to those deeper East Delta rigs, his mix might include cobia, grouper, snapper and amberjack — all spread throughout the water column and all quickly reachable with a jig.

Bayou Lacombe heats up as water cools in October for bass and bonus fish. Corey LaBostrie, aka “Marsh Martian,” shares his top spots. […]