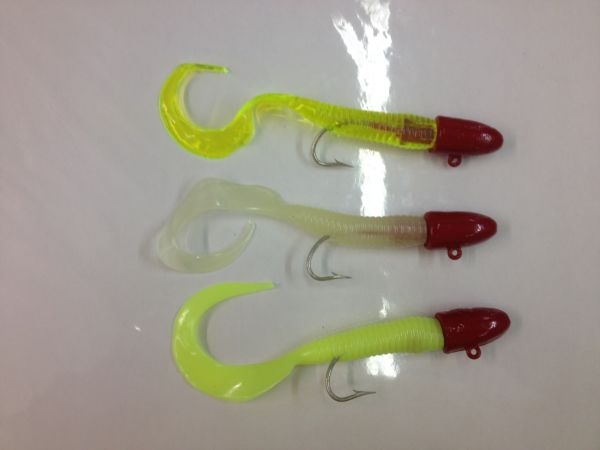 Unless you are an avowed live-bait addict, it would be a shame to spend all day long dealing with the real thing only to find out later that fish were smashing artificial lures.

Take speckled trout anglers for example: Most every fishing fanatic I know fishes live bait only out of necessity. They reason that if the trout are hitting plastics there’s no reason to mess with shrimp or croakers all day long.

Capt. Gray Long is kind of the same way when it comes to catching cobia on the shallow satellite rigs in West Delta during September.

He knows they will eat live mullet and dead pogies, so why does he insist on jigs?

“It’s easier with a jig,” Long said. “You just don’t need bait. Now there are times when they just follow you up but they don’t bite. You can see them just under the water and they won’t bite. Then you can put on a dead pogy without a weight and just throw it out there.

“But we usually don’t have any trouble sticking strictly with jigs.”

“You can use bucktail, too,” he acknowledged, “but if I’m going out there, I’m using the 6-ounce head with the curly tail. Whether it matters or not, I’m using a red jighead with a chartreuse, opaque chartreuse or an off-white-looking color called night glow curly tail.”

Long fishes his jigs on spinning equipment that he said is the same kind of gear he might use to throw topwater poppers to tuna. For this kind of cobia fishing, he thought even redfish gear might work, but added that sticking with the same kind of rods and reels you might use for mangrove fishing would work well.

“I fish a lot of Shimano Talicas, too,” Long said. “Anything you can cast fairly decent. We use 60-pound-test fluorocarbon leader tied to Jerry Brown main line.

“Sometimes we can get away without the leader, but we generally like to keep one tied on.”

Long said anglers can catch these cobia by jigging straight up and down, but he usually stays away from a rig a little bit and casts toward it. He lets it hit bottom and starts working it up.

These jigs also work well for sight-fishing cobia that have come to the surface, with the only difference being that you shouldn’t let them sink. Let them hit the water, and then get them moving right in front of a curious-looking fish.