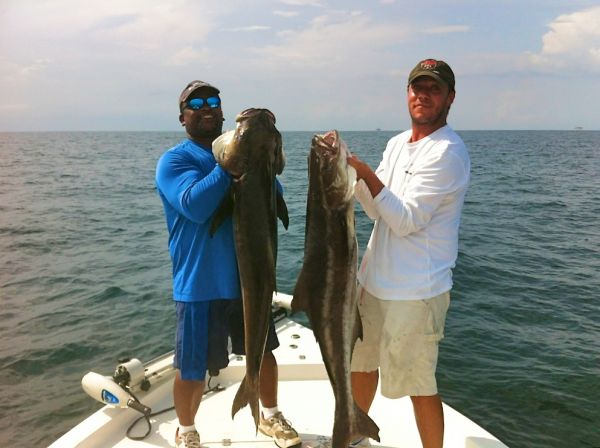 The first thing that comes to my mind when I think about offshore fishing is big rods, big reels, big line and even bigger boats. But as far as Scott Walker from Norco is concerned, there’s no need to stay home just because your stuff isn’t as big as an offshore charter captain.

“We’ve been going out catching cobia about 10 miles out of Port Fourchon out of a 22-foot bay boat,” Walker said back in August. “We’re trying to pick and choose our days, and we can handle up to about 2-foot seas.”

Although they had been going out about 10 miles for most of the summer, Walker and fishing partner Andre Thomas expect that they won’t have to run nearly that far come September.

“I just started cobia fishing this past March,” he admitted, “but from what I understand these fish could be in as close as two miles once they start making their migration back to Florida.

“That means anybody should be able to head out of Fourchon to the first set of rigs they see, pull up to them and start catching fish.”

And even with rods that fit their boat, Walker and Thomas don’t have any trouble at all hooking into and landing cobia up to 50 pounds.

“We’re using gear that’s just a little bit bigger size than what we would normally use for trout,” Walker explained. “It’s more like the same gear we would use for bull redfish spooled up with 65-pound-test braided line.”

Walker actually got hooked on cobia fishing by accident when he had to throw back a 17-inch red snapper. When it hit the water, a cobia came out of nowhere and tried to eat it.

“We had some cobia jigs tied on just in case, so I dropped it in front of him, but he wouldn’t touch it,” Walker recalled. “Andre put on a live croaker, and it didn’t last 20 seconds.”

They untied from the rig so Thomas could battle his fish, and another one popped up. Walker dropped his jig right in front of it, and he hooked up too.

For Walker, an avid redfish stalker in shallow water, seeing the fish and watching it attack the bait was more than he could stand.

“Now I’m banging on the side of my motor, sticking my motor in reverse to make all kinds of racket and watching cobia come investigate,” Walker said. “We’re watching for them in our wash as we try trolling for kings.

“Cobia fishing is my new love.”

And the good thing about Walker’s new love during September is that it’s not going to be a long-distance relationship.

Across Louisiana, there’s plenty of public access, a large squirrel population, a liberal bag limit and a long season. […]