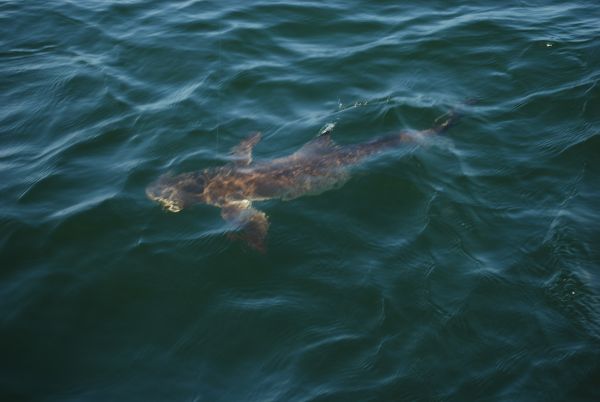 Cobia, also locally called lemonfish or ling, are a prized Gulf of Mexico fish. My first experience with them was when I was working as a wireline helper on a small satellite offshore oil platform on Ship Shoal in May of 1965. I was a lot more attracted to the fish beneath the platform than my work. Of particular attention were the large brown “sharks” that kept appearing and smacking at the surface.

I mentioned them to the helicopter pilot who had flown our lunch over from the main platform, and his reaction was “Sharks?”

I called him over to the rail and, as if on call, one appeared immediately.

He screamed at the top of his voice, “Lemonfish!” and ran back to his chopper, where he got on his radio and immediately began yelling in the radio mike, “The ling are in; the ling are in!”

He flew off and returned with “fishing lines,” each of which was a 3/8-inch poly rope, a 2-foot length of chain (mainly for weight) below that and a shark hook at the bottom. We needed the heavy rope because we were fishing from the main deck, 40 feet above the water’s surface.

He even had bait — frozen hardhead catfish with the spines clipped off. He directed that we shut the wireline unit down and fish.

Soon we had five fish longer than me bleeding out on deck. We went back to work, and he flew the fish to the main platform for us to clean at the end of the day. When we got there, there must have been 20 cobia hanging, ready to be cleaned.

Apparently, the field foreman (company un-named) was addicted to cobia and complicit in making oil production secondary to cobia fishing when the fish appeared each spring on their northward migration from warmer waters. Fishing gear was there for every man, and they had been catching and freezing bait in anticipation of the blessed event for days.

Cobia are cool fish and, while their dense, but mild meat is prized in Louisiana, they are neat for more reasons than their culinary attributes.

Known to scientists as Rachycentron canadum, they are the only member of their family. In Greek rhachis means “spine” and kentron means “sting,” apparently in reference to their dorsal (back) fin spines.

Where canadum came from is anyone’s guess, because they are found all over the world in just about every place but Canada.

They are most closely related to remouras and, on second glance, do resemble them somewhat. A characteristic that both fish share is that neither of them has a swim bladder.

Cobia are classified as a warm-water fish, and in the Gulf of Mexico they are migratory and winter in the Florida Keys. They move north and then west to Louisiana and Texas in the spring, and are common through the summer. Some research also indicates that not all cobia migrate to southern Florida in the winter.

Tagging done under a program conducted by the Gulf Coast Research Laboratory shows a number of winter recaptures made in the northern Gulf, most from waters over 100 feet deep. None of these cobia were fish that had been tagged in South Florida.

This seems to indicate that some fish stay in the northern Gulf year round.

It is also known that some cobia stay in South Florida waters year round and do not migrate.

The tagging work provides strong clues that cobia have the ability to “home in” on exact locations. During the early part of the program, researchers recovered 30 fish in the exact sites where they were tagged in one to three years earlier. It is unlikely these fish stayed onsite by overwintering, since the areas were in very shallow water (60 feet or less).

Several hundred cobia were also recaptured in the same general area in which they were tagged.

None of this means cobia don’t have traveling legs. One long-distance champ moved 1,300 nautical miles from the Chandeleur Islands off Louisiana to the waters off Hardeeville, S.C. That ling was at liberty 1,046 days after tagging.

Two other cobia in the program traveled over 1,200 miles. One was tagged off Pensacola Beach, Fla., and recaptured in Murrells Inlet, S.C. The other traveled from South Marsh Island to Daytona Beach, Fla., in only 238 days.

A speed record was set by a ling tagged in Port Canaveral, Fla., and recaptured 700 miles and 46 days later off Apalachee Bay, Fla. This fish moved an average of more than 15 miles per day.

Like other fish species, cobia populations seem to run in waves, probably due to them having more successful spawning years or having multiple good spawning years in a row. As a case in point, all five Gulf states set their current records during one five-year period in the 1990s.

The current IGFA all-tackle world record is 135 pounds, 9 ounces, and was set in 1985 in Shark Bay, Australia

The Gulf of Mexico and, of all places, the Arabian Sea are listed as the places with the largest populations of this far-flung fish. However, until Chinese farm-raised cobia appeared in the world marketplace, Pakistan was listed as the largest producer.