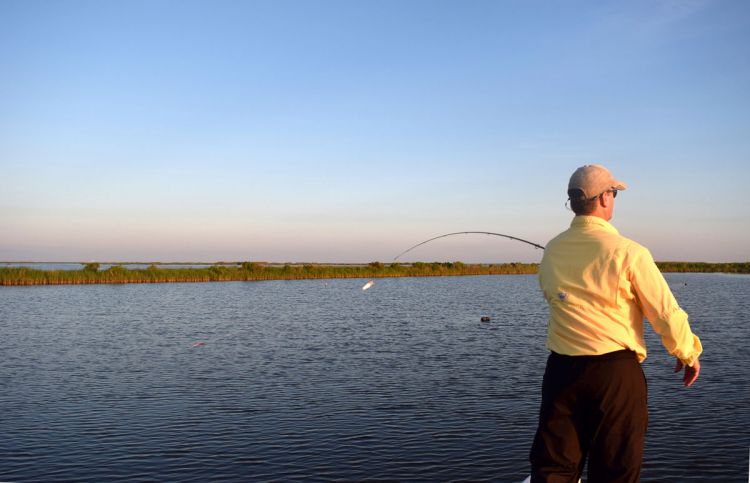 Anglers have two opposite outlooks about bird-fishing: either they love it because it offers fast, every-cast action, or they loathe it because the birds never stay in one spot, and the specks under them are about as big as the bait they’re throwing. It can be a love/hate relationship.

Although Larry Frey doesn’t particularly like bird-fishing, he will occasionally chase after them, particularly in May, when the birds are diving in full-force.

“The birds will be available on the inside all the way through mid or late June,” he said. “It really depends — every year is different on the shrimp crop.”

Approaching birds correctly is critical for bird-fishing success, according to Frey. Get too close to them, and they’ll fly off faster than Usain Bolt.

“I either get upwind or upcurrent and drift into them,” he said. “Sometimes, I’ll pole up right before the flock. You have to feel them out; every flock is different.”

Inevitably when you’re fishing birds, some of them — if not all — will leave the area. Frey doesn’t get scared off by this because he says if the bait is still there, the fish will be too.

“Many times you get on a flock of birds, and the birds leave, but the fish are still there,” he said. “Give it an effort: You can definitely catch fish once the birds leave.”

Birds have an undeserved stereotype of only having small fish underneath them, but Frey is usually able to scoop up some keepers in the mix this time of year.

“You catch a lot that are 14 inches or so, and you have quite a few more throwbacks than what you catch on the bottom,” he said.

Calm days are always more enjoyable than rough ones, and it certainly stacks the odds in one’s favor for bird-fishing, according to Frey.

“The calmer the day, the better,” he said. “Also, it helps you stay with the school of fish because it’s a lot easier to see the small shrimp skipping across the water when it’s calm.”

About Joel Masson 169 Articles
Joel Masson is an avid angler who has fished South Louisiana his whole life. He lives in Mandeville and can be reached at Joel.masson19@gmail.com.