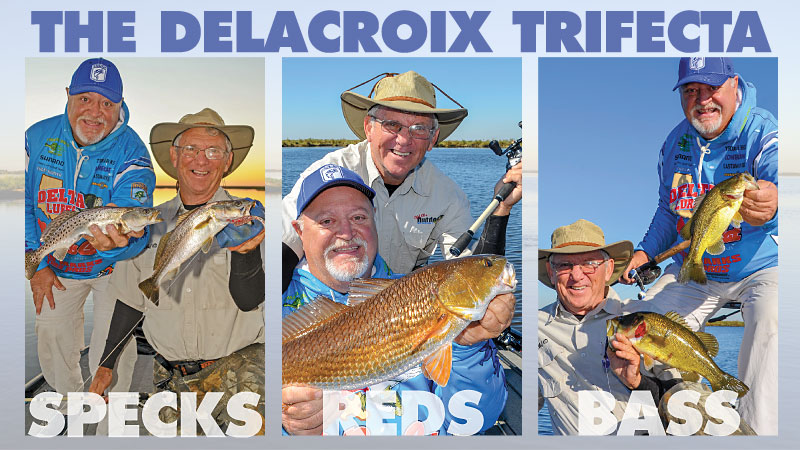 Specks, reds and bass are all doable on a nice fall day in Delacroix. Here’s what you need to know to pull off the triple play.

The definition of trifecta is a run of three wins or grand events.

“Let’s go to Delacroix and do a trifecta.

“The trout are for eating, the redfish are for fighting and the bass are for fun.”

The speaker was a big man — tall and all of 300 pounds. He spoke with authority.

Gene Hoover retired as a high school principal four years ago. Already a bass fisherman, he focused on competitive bass fishing. After he fished the Open Series with BASS, he got the tournament bug partly out of his system.

Then he earned his license to become a newly minted speckled trout, redfish and bass charter guide (Gene’s Charter Service, 225-206-0750) out of Delacroix.

“Why Delacroix?” I asked him.

“Because of its diversity,” he replied. “Last trip we had specks, reds, bass, black drum, sheepshead and white bass.

“From September to April, I fish inside (interior marshes) to catch all species. From May to August, I can fish the outer edges of Black Bay and get all the action anyone could want.

“I’ve been fishing the area at least 15 years. My good friend Chef KD will be fishing with us. You don’t mind, huh?”

Chef KD, born Kevin Diez and a native of Ascension Parish, is also a freshly-coined guide (Chef KD’s Outdoor Adventures, 225-205-2665), whose stomping grounds include Delacroix as well as Grand Isle.

Diez is famous for his cooking and catering, and now is also co-host of the Paradise Louisiana TV show.

It was late October.

The morning was like a madhouse. The road from New Orleans to Delacroix was clogged with trucks towing boats — bass boats, bay boats, aluminum boats, mud boats with surface drives—anything that floated.

Every service station had boats at each pump island. Convenience stores had rigs littering the lots, with their owners inside grabbing sausage biscuits.

Sweetwater Marina in Delacroix was even worse, with a long line of rigs on the road, trailers backing every which-way. Its side-by-side ramps were firing off boats like a double-barreled shotgun working on auto-load.

A traffic director stood in the dark in the middle of the narrow road barking out commands, generally making everyone equally mad.

“That’s Delacroix in the fall,” quipped Hoover patiently. “It gets even worse when duck season opens.”

Hoover had lured me into this tangled web with his promise of a trifecta.

The big guy explained the trifecta strategy for the day. “We’ll start with trout first because trout will only bite with a current. When the tide quits, they quit.”

“Trout are a schooling fish. We get on them early, we can catch one after another,” chimed in Diez.

“Bass are more structure-oriented and are more predictable,” Hoover went on. “Redfish will be in the grass chasing minnows, so we will be able to find them later.”

Hoover piloted us to a hard turn in the bayou between Grand Lake and Stump Lagoon. The main channel of the bayou swung further out and was 10 feet deep. The water near the point was 3 feet deep, and the current from the rising tide formed an eddy behind the point, inside the wide swing in the bayou.

“If the tide was falling we would be fishing in the lake, where the bayou empties into the lake,” said Hoover. “But it is rising now and the trout should be stacked up feeding on shrimp.”

It was a slaughter from the first cast. Diez was the official counter, and they had 25 fish in the box by 8:10 a.m. They got tired of running to the ice box strapped down in the back of the boat for every fish, so they just left it open and unerringly launched trout from the bow deck into the box.

Finding the feeding fish was the trick. Once located, the gear they used was simple: Both had oval rattling clip-on corks on their lines, set 3 feet above plastic-tipped jigheads.

“I like clip-ons because they are easy to adjust. The depth I fish changes from spot to spot,” explained Hoover. “Another thing,” added Diez, “is that tie-on corks add two more knots to fail.”

“The key indicators to finding trout in Delacroix in the fall are finding bait, or working birds and fishing current lines,” Hoover said. “Most trout here summer in Black Bay or further out, and then move into the interior marshes between late September and early November.

“When you get a cold front, the wind blows the water out of the marshes. When it comes back in, the trout will come with it.” That was exactly the scenario that played out.

“A few trout remain resident year-round in the marsh,” noted Diez. “We call them golden trout because they have a different color.”

“Let’s see some green now,” grunted Hoover as he cranked up the boat. It wasn’t a long run — 200 yards maybe, before stopping near several cuts in the bayou bank.

I questioned fishing the mouths of cuts on a rising tide.

“You have to remember,” lectured Diez, “that the water goes into the cuts on the upwind side of the marsh, through the ponds and out on the downwind side. Because of erosion, the marsh is like Swiss cheese — holes everywhere.”

It also didn’t seem logical catching freshwater largemouth bass and saltwater speckled trout so close together. As if reading my mind, Hoover spoke.

“We haven’t had a major hurricane in a while, and they ran the freshwater diversion from the Mississippi River 24-7 during the oil spill. The bass population has spread all over the northern reaches of the Delacroix marsh.

“We can catch bass anywhere we fish today. Where we just caught the trout, we could probably have caught some bass if we had fished close to the bank.”

The difference between catching bass and trout was micro-habitat (open water versus near banks and in cuts) and lure choice.

The pair switched lures. Diez went wormy, with a 6-inch June bug colored Zoom worm on a 2/0 Owner offset shank wide gap worm hook. It was Texas-rigged with a 1/8-ounce tungsten weight pegged on the line.

Hoover went with a Delta Lures single-bladed safety pin spinner with a gold No. 4 Colorado blade. But instead of a skirt, he put an ultra-violet (although he admitted his favorite color is green hornet) Matrix Shad on the hook. He dipped the tail of the plastic lure in chartreuse Dip-N-Glow.

Things started with a bang there, too. The mouth of the first cut produced five bass, the biggest of which was 3 pounds. “You can expect to catch bigger bass here than typical marsh bass,” Hoover said.

“We had a tournament here recently, and it took 16 pounds to win. Four-pounders are not uncommon.”

Their tactics were simple. They fished the mouth of each cut, then trolled and fished into each a short distance, then fished out and moved on to the next cut.

And finish with redfish

They were surprised that they hadn’t pick up a redfish while bass fishing. Since the reds didn’t want to play with them there, they moved to a broken marsh bordered on three sides by Bayou Terre Aux Boeufs, Bayou Gaudet and Lake John.

“You gotta find reds,” Hoover croaked. “It’s definitely more sight-fishing than with bass. Broken marshes (a South Louisiana term for marshes fragmented into smaller pieces by erosion) are ideal. Sometimes they will get on edges of grass beds in lakes, bayous and ponds, too.”

Diez added, “At high tide, they go into shallow marsh ponds. At low tide, they leave the ponds and go to points in bayous. I’ve seen 25 fish in one little area.”

“Look for bait,” Hoover said. “Redfish move around a lot more than bass,” explained Diez. “One redfish may work a quarter-mile of bank. You can see them pushing a V-wake, or you will see bait jumping ahead of the fish.”

Diez shifted lures to a 1/8-ounce white Strike King double-blade spinner with a willow leaf blade on top. Both blades were silver. Hoover stayed with his bass spinner.

They cast strictly toward the bank for redfish, unless they saw a red move or blow up on baitfish in the open. They landed one, then another, then another.

“I hear that shrimp po-boy at Last Stop calling me,” Hoover sang out cheerfully.

Diez grinned. He knew food, too!

Kevin Diez, as a chef and food person, is critically interested in the quality of the fish he brings home. To produce the best finished product, he adds water to the ice in the ice chest to make an ice-slush.

“The fish chill better, they are less slimy and they are easier to fillet because they are not all curled up,” he said.

an ice chest lid or ruler to measure fish is time lost from fishing. When the bite is over, it’s over.

Both Hoover and Diez carry a several-inch-long piece of 2×4 board in their boat to place between the trolling motor mount and its cradle. Inserting and removing the block is much faster than is loosening the nut on the bracket and sliding the motor’s shaft upward when they need to elevate or lower the power head when fishing in shallows or weeds.

Another advantage to the use of a block is that it angles the head of the motor upward, helping it to glide over submerged grasses rather than dig into them.

If they kick the motor into high and it wants to jump up, they simply use their free hand to hold it down.