While last year’s breeding season kicked off a little early, Dave Moreland is predicting a more typical rut for Louisiana whitetails this year.

The rut is always the best opportunity for a hunter to connect with a real trophy buck during deer season.

But the whitetail rut in Louisiana can be a blessing or a curse for our state’s hunters. It begins in September in the southwest parishes of the state, and runs all the way through the end of archery season in late-winter in the Atchafalaya Basin.

Hunters in early-rut areas have the advantage of getting to hunt the rut from start to finish, while hunters in late-rut areas generally miss out on the second round of breeding activity. 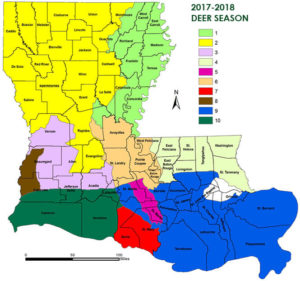 But hunters in the early-rut areas have to deal with warm weather hunting, while hunters in the late areas might experience extreme cold temperatures, like last season.

So while early-rut hunters finish their season relatively quickly and can pursue other hunting activities, late-rut hunters have to hang on in hopes of connecting with that wall hanger —  possibly missing out on some duck and small game opportunities in the process.

Last season the Sportsman’s prediction for the rut was for it to peak around the middle of the month for the respective areas; Oct. 15 in Southwest Louisiana, Nov. 15 in Area 2, Dec. 15 in Area 4 and Jan. 15 in the late-rut Mississippi Delta. 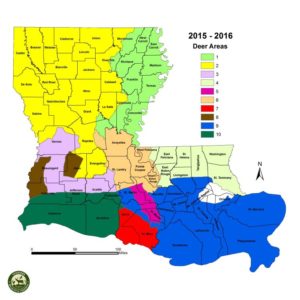 When deer season opened in the state, warm weather prevailed, but beginning in mid-December we were bombarded with three major cold fronts, two of which dumped snow in the Bayou State.

Deer hunters did well in Area 2. The buck harvest for an Area 2 club in Bossier Parish was as follows:

The rut on this club is the typical rut for Area 2, with activity beginning in late October, peaking in November and then ending by late December. It’s a long deer season in Area 2, and for the most part once the rut is over, the chances of connecting with a buck in December or January are poor.

There are however, lands within Area 2 that were stocked with deer with late-rut genetics, so the late season days benefit these hunters.

The predicted early rut was pretty much on target. My friend Ken and I harvested two does in mid-December in Bossier Parish that had been bred: Using the fetal measurement scale, I calculated breeding dates of Nov. 13 and Nov. 24 for these two does.

In Area 4, snow hit the state during the first full week of December. I killed an adult doe on our property during that week, and checked her ovaries but found no signs of ovulation. The snow fell on Dec. 8 and I saw small bucks moving around and feeding, but no sign of breeding activity.

After the snow melted, the deer seemed to disappear, but toward the end of December the rut appeared to crank up a little later than predicted. Then another heavy freeze hit the first week of January, and it seemed to shut down deer movement.

This was followed by yet another snow event the week of Jan. 16. My son Ruffin and I hunted in Area 6 on Dec. 20 and we saw two nice 8-points that were looking for does based upon their actions. There were two adult does killed on this hunt, and examination of the ovaries showed that ovulation was taking place, which meant the rut was on.

I killed my third Area 4 deer on Jan. 25, a 1 ½-year-old doe that was ovulating — so the rut was still on there in late January.

No doubt our Louisiana deer are not used to severe winter weather, but they’re equipped to handle it.

Our piney woods habitat in the state is certainly not designed to handle heavy snow events, and there was a good bit of limb damage which resulted in numerous power outages. I suspect deer movement was poor with all the cracking and breaking of limbs in the woods, and they simply laid low during this time.

It appeared to be a relatively low harvest of trophy-class bucks last season, based on the number of quality bucks at the Louisiana Sportsman Show in Gonzales in March. The extremely cold winter days in January may have contributed to the lack of hunter success during late-rut.

My prediction for the 2018 rut is that it will take place several weeks earlier than last year. When the primitive deer season opens in late October, actual breeding activity should be cranking up, with bucks chasing does. It would certainly be important for Area 2 hunters to be in their stands during the first two weeks of regular gun season.

Area 4 hunters should see some chasing toward the end of November, while hunters in Areas 1 and 6 should see activity in late December and early January. This should be a year that late-rut hunters will get to hunt the second round of breeding activity in late January.

The pre-rut activities began in August, even though temperatures were hot. Bucks were making scrapes during this period, but didn’t check them like they will during the first peak of scraping. Bucks will still be in their bachelor groups, and will be feeding heavily during this time. This area of the state is not known for producing the wall hangers that are found in the Mississippi Delta parishes. The limit of deer in Area 10 is three (see regulation book).

This is the largest area in the state containing parishes having a high deer harvest, such as Union and Claiborne. Bowhunters will see activity when that season opens on Oct. 1. And the primitive and gun hunters better be in their stands when those seasons open up. This is not the area to wait for the winter months to start deer hunting. With peak breeding occurring in November, the does will be pregnant in late December and January, and there will be visible fetuses in their uterus. Breeding dates can be calculated at this time using the fetal aging chart, and hunters can see when the breeding happened.

Determining breeding dates of does

This research along with a fetal aging scale has made it easy for a landowner or club to gather beneficial information regarding the rut on the land they hunt.

Generally it is best to examine does that have been pregnant for at least two months. At the age of 30 days, the fetus or embryo is a small shrimp-like body that is only 7- to 9-mm long. The fetus scale is not designed to measure an embryo or fetus this small. At 60 days old, a fetus is about 75 mm and can be easily measured on the scale. Generally in the month of January in Area 2, a fetus is large enough to measure on the scale and, breeding dates can be established for does, which is just what I did on my friend’s place in Bossier Parish.

However, in late-rut areas does harvested in late January are probably pregnant, but the embryos are too small to obtain a proper measurement. This just shows how late the rut is in Areas 1 and 6, and why the late season is important to the hunters in that part of the state. The fetal aging scale can be obtained from Forestry Supply in Jackson, Mississippi or from Construction Safety Products in Shreveport.

Area 4 also has a three-deer limit like Area 10. This regulation was designed to increase deer numbers in these locations. Lands that have not experienced a decline in deer numbers should consider enrollment in the DMAP program. Hunters in these areas will be able to hunt both periods of breeding activity this year. Bowhunters should see scraping in October, but these will not yet be checked on a regular basis. One month later, in November, the peak scraping period will take place and that will be the time to hunt the scrapes. During the second period of scraping, young nubby bucks are becoming sexually mature and will be working the scrapes. This second period of breeding activity is often a good time to connect with a nice late-season buck.

The Mississippi Delta parishes and the upper-Basin parishes are the big buck locales of Louisiana. Avoyelles Parish is the king these days, although the old big buck parishes of Tensas, Madison and Concordia still grow big ones. The two weeks or so after Christmas would be the best time for hunters in these areas to hit the woods and bust a nice buck.

With this information in hand hunters should be able to plan their hunts and start watching weather forecasts. While the rut will go on even during warmer conditions, activity is best when  temperatures are 60 or lower, and the barometric pressure is around 30.

From what I have seen on the landscape, there appears to be a decent acorn crop developing, so hunting the oak trees during the pre-rut feeding periods is a must.

Tag your deer and report your harvest. And as always, hunt hard, but hunt safe.