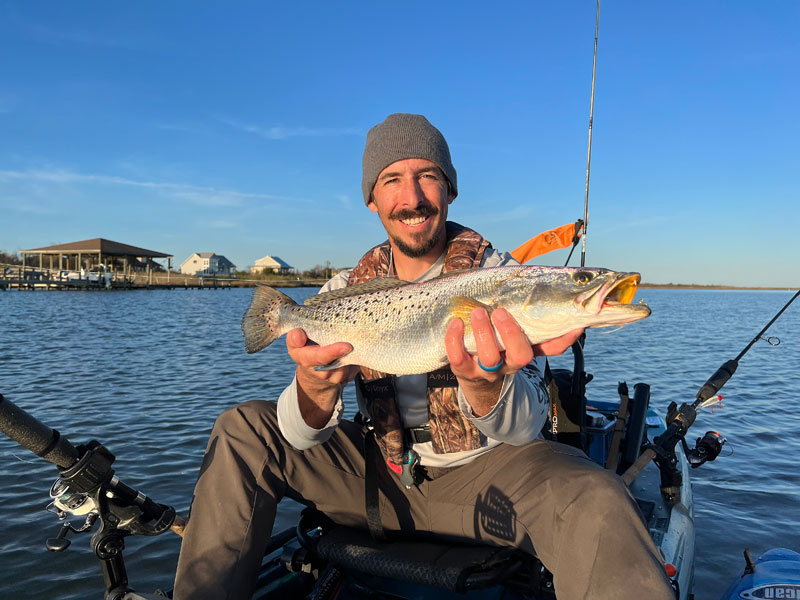 North winds blowing at 15-20 mph, overcast skies and a high of 56 degrees; three good reasons to just stay home and clean your tackle box this month. But as the ole’ saying goes — “fish gotta eat!”

And nothing spells wintertime fishing like the Geoghegan Canal.

Pronounced “GO-he-gan,” the dead-end canal stretches two miles from Rigolet’s Pass and runs along US Highway 190 in Slidell.

“It’s one of the most productive places that I know of for catching wintertime trout,” said Max Patrucco of Slidell. Patrucco fishes from a kayak and counts the Geoghegan Canal as one of those “no-brainer’s” when deciding on what area to fish this month.

“The deep holes and ledges that make up the canal and the lagoon are perfect for wintertime trout,” he said.

When fishing Geoghegan’s, or as Patrucco likes to say — “Geo’s,” it’s not about covering a lot of water.

“The great thing about fishing this area when the water temps are below 60 is the lack of guesswork,” he said. “In February, I’m not fishing the shoreline, or the duckponds, or even the drains — It’s all about the ledges and drop-offs.”

Patrucco discovered the ledge in 2012 on his first trip to the area. His kayak was 20 yards from the bank and he was fishing the shoreline for redfish using a gold spoon.

“There was a boat that stopped in the middle of the lagoon and was throwing towards me and working their lures on the bottom” Patrucco said. “They started catching trout on almost every cast so I just got out of their way and learned from their technique.”

Since then, the Geoghegan rookie has put in the time to learn more about the ledge that drops from 10 feet of water to 30 and 40 feet in some spots.

When fishing the lagoon, Patrucco uses 10-pound braid with a 10-pound fluorocarbon leader about 2 1/2 feet long. He connects the lines using a Fine Grip knot AKA “FG” knot.

“I find that knot is strong and slim at the same time,” he said.

For a rod and reel, Patrucco prefers a 7-foot medium action rod paired with a spinning reel.

In February, the bait shops and marinas are iffy when it comes to stocking their tanks with live shrimp, but Patrucco said it’s the first option for him. He uses a drop-shot rig when he’s able to find and use live shrimp. When shrimp is out of stock he uses the 3.5-inch Slam Shady Paddletail made by Salt Strong.

“The Slam Shady is scented, which can help since it’s a slower jigging process in the cold,” he said.

Patrucco rigs it on a 3/8-ounce jighead. In February, the water in the Geoghegan’s area is relatively clear so he opts for more natural colors over bold colors. He positions his kayak 20 yards off the northeastern shoreline and casts past the ledge. Then he works his lure back in order for it to drop down the ledge.

“I’ll give it a good pop and it’s usually when the bait is falling that I get hit,” he said.

While Patrucco sticks to the ledge in Double Bayou Lagoon when the water temperature is below 60, he takes another route if the water temperatures rise. He peddles his kayak on a path that he likes to call “The Golden Triangle.” He calls it this because the path resembles a triangle on a map.

“I like to get an early start around 5:30 a.m. and work my way up Geoghegan’s Canal,” he said. He works the west side of the canal casting to the piers that still have their lights on. He then peddles across Double Bayou Lagoon and fishes the ledge. After finishing up with the lagoon he fishes East Double Bayou all the way out to the Rigolets.

“I’ll fish the northern shoreline of the Rigolet’s and then my final stop will be the Highway 190 Bridge,” he said.

As February passes by, the bite should remain strong in the deeper sections of the Geoghegan’s area even into March. Anglers who put in the work to find the deep holes and ledges with their electronics will reap the rewards.

Go give it a try.

Any place where rabbits can find abundant undergrowth to hide from predators and succulent foods to nibble, hunters should find rabbits. […]