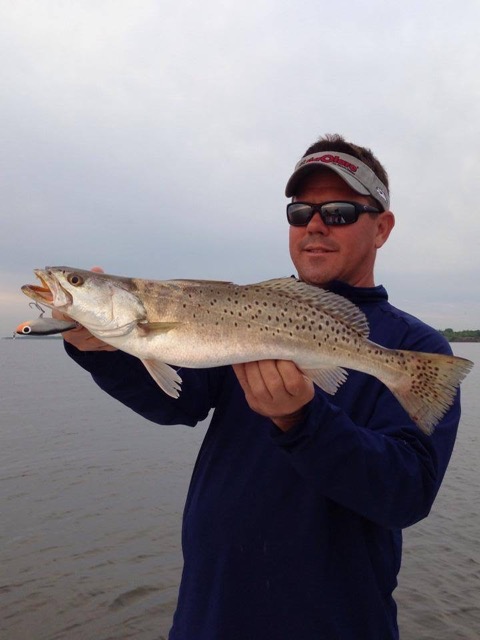 If you’re getting blowups but no hookups, try these tips

May is a great month to throw topwater lures for speckled trout all along the coast, and it’s especially true in Big Lake.

“It’s prime time,” said Capt. Nick Poe, with Big Lake Guide Service. “May is a great topwater month. They’re typically right in the middle of the spawn and they’re usually willing to eat topwaters, so you always catch a lot better fish on topwaters.”

But sometimes, it seems like the trout just won’t cooperate.

“Especially in the first part of the month, they’ll be in a finicky mood coming off spring and winter,” Poe said. “So a lot of times you’ll get a lot of blowups — but you won’t be catching any fish.”

Poe can ‘walk the dog’ with the best of them, but he said it’s hard to pinpoint why on some days trout just won’t commit to a topwater lure.

“You’ll see them hit 2 or 3 feet behind it and you know that fish isn’t really trying to eat that bait,” he said. “If he was trying to eat it, he’d eat it.

“In the bass fishing world, if you’re working a topwater and they’re hitting behind it, they say you’re going too slow. But in the saltwater world, people say if you’re working a topwater and they hit it and miss it, stop it. My deal is if I’m getting blowups, then I know they’re there. So I’m going to find something else to catch them on. Whatever it takes, I’m going to figure it out.”

Poe’s first option is to switch to a suspending twtichbait like a MirrOdine if he’s in pretty water. (His favorite color is black with an orange belly.) If the water is stained, he opts for a Corky or Soft-Dine.

“If I’m around good fish, I’m going to the suspending twitchbait,” Poe said. “If I’m in 14- or 15-inch fish, I’ll catch them on a jig because they’re easier to unhook and get it back in the water. But you’ll always catch bigger fish on a bigger bait.”

Then do the jig …

If the twitchbait doesn’t get any takers, then he opts for MirrOlure Lil Johns on an ⅛-ounce jighead.

“Unless I’m fishing in the (Ship) Channel or dealing with some kind of mega-tide or something like that, an ⅛-ounce is usually what I have tied on,” Poe explained. “But usually if there’s a mega-tide you’ve got dirty water, so I probably wouldn’t stop and fish it, anyway.”

In pretty water, Poe opts for the Lil Johns in opening night and watermelon red. If the water is a bit more dirty, he goes with colors like molting and glow.

Then go somewhere else

And if he strikes out with the soft plastics?

“My next option is to pack it up and head somewhere else, because they just don’t want to eat,” he said with a chuckle. “They’re there and they might help me the next day, but they’re worthless to me then.”