Cold, winter water can throw speckled trout into a tizzy and turn fishing trips into hours of boredom, unless you understand how fish respond.

The day a boat gets winterized feels to me more like a funeral than a respite. Fortunately, I live on the Gulf Coast, and my boat never gets winterized. In south Louisiana, winter is simply one-fourth of the great fishing year. Smugness aside, there are some nuances to speckled trout fishing in the winter, and understanding these can increase your success on the water.

Like all fish, speckled trout live in areas where large, regular fluctuations in water conditions are common, but this is generally not a problem, as they have a wide tolerance range for these changes. Typical fluctuations include turbidity, salinity, pH, dissolved oxygen and temperature. In winter, the water temperature fluctuations are the most-challenging for Louisiana trout.

Trout risk death when they become trapped for a day or more in water with a temperature below their tolerance limit, which actually varies between regions where trout exist. For instance, in Florida, it was measured at 45o F, whereas in South Carolina it’s around 37o F. The Louisiana  Department of Wildlife and Fisheries uses 45o F as its threshold temperature.

In cooling water, trout will move from shallow, marsh areas to deep channels where the water rarely reaches dangerously low levels. However, disaster can strike when mild weather is replaced by a hard, fast-moving cold front that rushes down, blotting out the sun and dropping the water temperature quickly. The preceding days of mild weather will have caused trout to gather in shallow areas that may not be close to deep water. The rapidly dropping water temperature can immobilize them before they can reach safety. This is one scenario that can result in winter-kill events, when immobilized trout die in a process referred to as stun death. 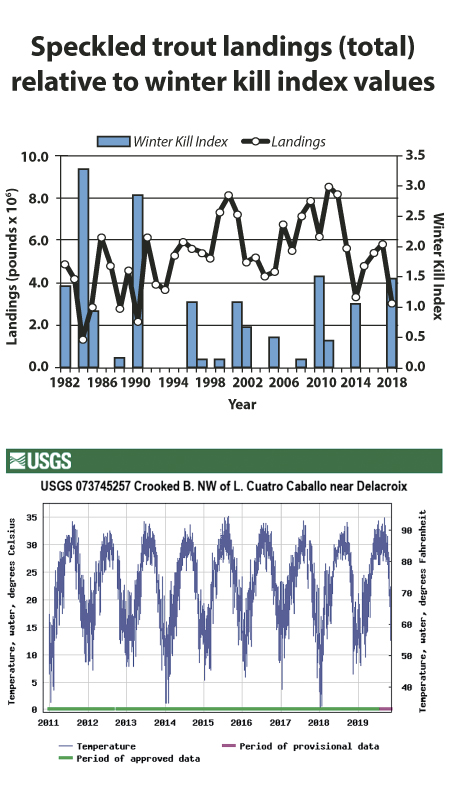 The LDWF tracks winter-kill events and has included data on winter kills in their Assessment of Spotted Seatrout in Louisiana Waters 2019 Report. The index values are calculated from the number of days when the water temperature drops to 45oF or lower. The higher the index value, the greater the trout mortality. Significant winter-kill mortality occurred as recently as 2018.

The Winter Kill Index is not something our electronics can measure or is available as an online meter, but we can measure the water temperature from which it is calculated. Data gathered from the USGS Crooked Bayou station near Four Horse Lake, 61/2 miles southeast of Delacroix Island, shows how cold the water was at the time of the high Winter Kill Index values in the previous chart. The water temperature 3 feet below the surface of Crooked Bayou dropped to near freezing in 2011, 2014 and 2018, which were all years that had high Winter Kill Index values.

Many of us have experienced difficulty catching trout in cold, winter temperatures, and its not just due to our poor fishing skills. This difficulty was quantified in a study from Charleston Harbor, S.C. When the winter water temperature dropped 10oF below normal, the number of catches dropped by 90%. Fishermen in Charleston may have felt like they were beating dead water, but this event can be understood as a result of low fish metabolism.

Metabolism has a direct relationship to water temperature; low temperature results in low metabolism in fish. Metabolism is a measure of how much oxygen is consumed and is a direct comparison to biological function. Therefore, when metabolism decreases, so does the amount of energy they consume and the rate at which they digest food. A fish has no reason to eat if its stomach is still full. Therefore, in cold water, a trout in Louisiana may only need to eat every five to seven days.

Our south Louisiana winters are typically warm, with bouts of cold weather driven by fronts from the north. However, it’s unusual for cold temperatures to last more than a few days, so it’s likely that within every 7-day period, there will be at least one day with bright sun and milder temperatures. These are the days that trout choose to feed voraciously. They will often be observed beginning their feeding activity by mid-morning, when the bright sun has warmed the surface water.

How to identify safe water

There are two primary characteristics of safe water: depth and current or lack thereof. The depth characteristic is obvious because, on the Gulf Coast in winter, deeper water is warmer than surface water. However, the relative calmness of the water is also important for three reasons. First, trout are already experiencing slower biological functions and may not have the resources to fight a strong current as they would find in a fast-moving bayou. Second, a falling tide will drain the cold water from shallow ponds and drop the bayou’s water temperature even lower than is typical for the depth. Third, water with a disturbed surface such as current creates will cause more mixing of cold air into the water, causing faster cooling of the water.

Large, straight channels like the Intracoastal Waterway (ICW) and the Mississippi River Gulf Outlet (MRGO) provide plenty of water depth without high-velocity water flow, and they are proven locations for finding cold-weather trout. Another attractive spot for safe water is a wind-protected, dead-end canal, especially where the water depth is 6 to 8 feet. In these areas, trout can rest until the water begins to warm and still remain close to good feeding grounds.

One of my favorite winter fishing spots is a 10-foot deep bend in a bayou that does not move a large amount of water because it does not drain a large area of marsh. What makes this spot extra-special are the oyster shells that line the bottom of this bend. I do not know if there are live oysters, but there is an abundance of shells that moderate temperature fluctuations and provide habitat for bait. The current flow through the bayou is never strong, which adds to its appeal as a cold-water refuge. This spot is not merely safe water in winter, but also attractive trout habitat in spring and fall.

The Gulf of Mexico

Another path trout can take to find safe water during periods of cold, winter weather leads to the Gulf of Mexico. We understand that speckled trout move from waters near the Gulf to marsh and inner lakes after the spawn because there are fewer large, aquatic predators, and there is an abundance of food. This is what makes fall such a wonderful time to fish inshore waters. However, if the water becomes too cold for the trout to tolerate, a percentage of them may be forced to move to the Gulf of Mexico. While I believe this is a last resort — it requires a large expenditure of energy and increased mortality risk — the water near the Gulf is significantly warmer than inshore. 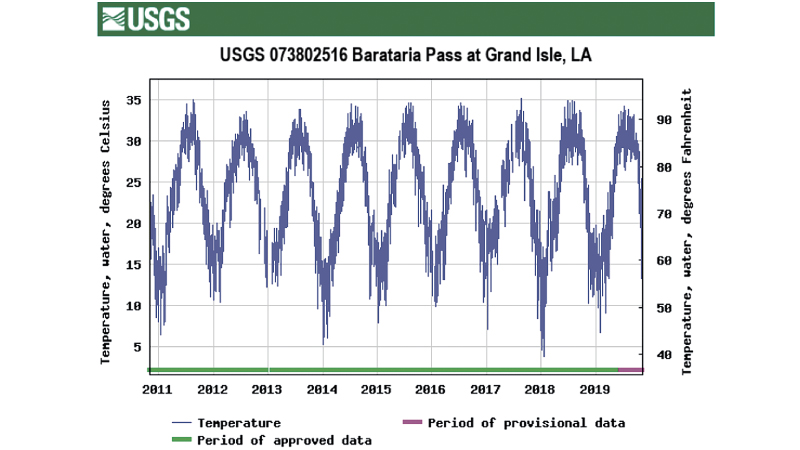 A variety of food for inshore trout is available during the winter, including threadfin and skipjack shad, killifish, inland silversides, juvenile mullet, sheepshead minnows and sailfin molly. Juveniles of other predatory species, including Atlantic croakers and speckled trout, are available mature trout.

When I fish deep water in winter, I fish swimbaits on jigheads and work the baits slowly along the bottom to pattern the finfish upon which trout are feeding. I hop the bait a little, but I find that, in general, a slow drag along the bottom is most effective. I do not believe trout have too little energy to pursue a faster-moving bait, but that a fast-moving bait looks unnatural. The finfish on which they are feeding also have low metabolism in cold water and so are less active in winter.

One of my favorite features of the Gulf Coast climate are the winter days when the winds turn and bathe us in warm, Gulf air and bright sunshine. On these days, I switch from the swimbaits to twitch baits and fish channel edges in 3 to 8 feet of water. One bait I like is the Paul Brown Fatboy, which I find quite effective fished in a sweep-and-sink motion.

By the end of February, I begin fishing shallow, marsh lakes with topwater stick baits and popping corks. It seems that by then, trout feel safe from the risk of harsh cold fronts and will shoal in amazingly shallow water. I will search for them in lakes with as little as 1 to 2 feet of water, where I find them by drift-fishing on late winter winds.