Big speckled trout have particular times they feed during the moon cycle. Pay attention to your success and friends’ successes and pinpoint when that big-fish feeding window opens

With the holidays in our rear-view mirrors, it’s only fitting that we deal this month with some sort of diet intervention, particularly a tryptophan detox. While catching up with my father over a cold beer, we started talking about one of my favorite sayings: “Feed the Machine.”

The phrase, although not original, is used in an original sense. During my time on the Mississippi Gulf Coast, I coined the phrase, with intent to describe big-trout feeding windows. In other words, it touches on getting in on the action while the getting’s good.

Mike McBride, a legendary Texas trout angler, friend and fishing mentor, once said to me that his mission — while guiding all those years — became one of proving theories, right or wrong, but more or less searching for the science of it all. “Feeding the Machine” fit that narrative. It was indescribable, but the meaning was never clearer. I believe that big-trout feeding windows are fairly scientific. Variables like moon phase and solunar, water levels and water temperature are just a few that play a part in opening the window. However, one observation I couldn’t pinpoint, other than my stupid slogan, was when the big-fish feeding window was open, it was OPEN.

Here’s my challenge to you. Let’s face it; we’re all pretty addicted to some form of social media, and chances are, if you’re reading this, you like to fish. I encourage you to start paying close attention to your social-media feed and the fishing pictures many of your friends post. What you will find is that quantities of small fish in those pictures will be found throughout the month. However, start noticing that twice monthly in a 3- to 5-day span, larger fish will start popping up on your news feed. Whether it’s at the cleaning tables or on the water, these micro windows start to appear.

The benefit of having Speckled Truth is the volume of anglers I interact with from various states and fisheries. What I’ve found is that big-fish feeding windows are immune to state lines. In other words, when the bite window is open, I’ll see photos of big fish being caught in North Carolina at the same time friends from Florida, Alabama or Texas are also on an epic big-fish run.

Personally, while on the Mississippi Gulf Coast, I fished so often that I even narrowed down the window. Both big-fish feeding windows appeared monthly on the two days before and four days after a full or a new moon. Almost 150 trips validated that trend while I winter-waded at night along the coast. Trip after trip, I’d come home empty handed in areas that would produce big fish consistently. Intellectually, which was always a struggle for me anyway, I couldn’t put together why some nights were better than others.

With sheer determination, I fished until I saw the trend. I’d go from catching one, maybe two, mid-teen fish to, all of the sudden, catching three 7-pound trout, as well as a handful over 5, in a week’s time. Shockingly, I finally then did something smart: I started documenting trip’s outcomes: failures and successes. Then, and only then, after stepping back and looking at it holistically, I saw these windows take shape. With my newfound knowledge, I joked with my wife about doing whatever was necessary to go “Feed the Machine.” 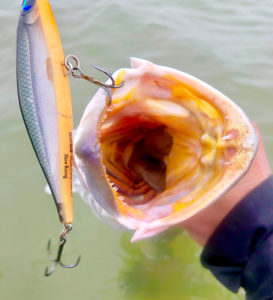 Whether I had to bathe the dog twice or wash the car in a bikini top, I didn’t care. My goal was to catch the biggest trout possible, and if weather was conducive during those times, I was out there giving myself the best chance at a big fish. Why? Because they were vulnerable to making a mistake.

Last, let me remind you that I lived in Biloxi from 2009 to 2013. Since that time, I’ve seen and fished similar trends not only on the Texas coast, but in Florida as well. My point is they exist. Social media gives you those glimpses, and chances are, there is a scientific explanation. However, if you’re serious about catching big fish, start targeting them during these windows.

So in closing, be observant both at home and on the water to what is going on in your estuary. Challenge yourself to explore more and get in tune with these big-fish feeding windows. After all, once its open all that is left to do is…Feed the Machine!

Timing is everything for trout:

Several years of record-keeping on the author’s part brought him to the belief that big speckled trout, real trophies, are more likely to bite during several distinct feeding windows: from two days before to four days after a full or new moon.

About Chris Bush 18 Articles
Chris Bush is an Air Force officer, and a licensed charter captain, husband and father. He spends his time targeting big speckled trout and sharing knowledge on his website, Speckled Truth.