When April arrives, speckled trout are in transition in south Louisiana marshes, following water that’s clear, warming up and high in salinity. Here’s how to find them.

April is a month that begs to be fished.

It features balmy temperatures, and the strong, cold fronts of winter are only a memory bobbing in our wakes. But April can also be disappointing for anglers, because our expectations of the perfect fishing month may not match the reality of fishing during a period of transition for speckled trout.

As early as February, female trout begin developing egg sacks, and by April, they are well-developed in many. The presence of eggs and the lengthening daylight hours will cause trout to start their migration from the protection of low-salinity water to water with salinity greater than 17 parts per thousand (ppt). In April, we can find inner marsh spots that are holding good numbers of trout one week suddenly be devoid of trout the next. The sudden change can be disorienting for anglers, but a boon for the fuel docks as anglers crisscross the marsh looking for schools of trout. 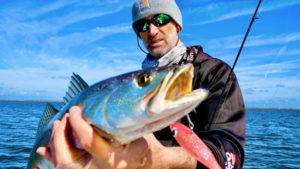 Here are some facts about April in southeast Louisiana that can be used as guidance to improve our success catching speckled trout this month.

The salinity of the estuary in April is reduced if excessive freshwater from the Mississippi River and other, smaller rivers is present. This can cause problems for anglers, and they are advised to stay away from the brown, silt-laden river water. This water is wrong for the trout in a number of ways. For one, the influx of dirty water lowers the salinity when trout are looking for higher-salinity water, and it also seems that the fine, suspended silt particles make trout uncomfortable.

In April, trout that wintered on the inside will be spread across a wide salinity gradient, from less than 5 ppt to water with more than 17 ppt. This makes concentrations of trout more difficult to locate. To help learn where to fish along the salinity gradient, I roughly correlate the day of the month to a salinity value. For instance, if it is April 5, then I choose spots around 5 ppt, and on April 20, I am thinking about spots closer to 20 ppt. I use the Lake Pontchartrain Basin Foundation’s hydrocoast salinity maps to find the salinity I am looking for; I often measure the salinity when I get to the spot using a conductivity meter or a hydrometer.

There is no hard and fast rule about what water trout will inhabit during April. Remember that trout will be affected by other factors, including water quality and water temperature, so I strongly suggest being flexible in April.

This change in metabolism can result in trout being more attracted to faster action from lures. For instance, I find that lipped jerkbaits worked aggressively really begin to shine in April. I still put a pause in my more aggressive cadence, however, because in my experience, speckled trout generally hit jerkbaits during a pause.

One very noticeable change in April is the increase in sunlight intensity; more precisely, in south Louisiana, we feel the heat. While this causes the water temperature to rise, it also increases the growth rate of biological organisms such as submerged aquatic vegetation (SAV) and phytoplankton. Since phytoplankton is the basic food for the entire aquatic ecosystem, the rapidly increasing growth rate of phytoplankton with rising water temperature is equivalent to dumping truckloads of food into the water. This extra food fuels the rapid growth of shrimp and baitfish, which in turn lets trout gorge themselves in preparation for spawning.

The growth of the SAV is also important to our estuary’s ecosystem, because it provides cover for the growing baitfish, removes sediment particles from the water and draws in predators searching for the baitfish. Since spring is a growth period for aquatic vegetation, early April is a great time to fish areas with abundant SAV, because trout will often be found feeding there.

However, the higher angle of the sun also means that more sunlight is penetrating the water, and this modifies my approach to fishing. For instance, I find that the all-day topwater bite in March begins to move to early morning and late afternoon as April progresses. This is especially true when fishing the rocky shorelines of the MRGO channel.

One concept I use to help adjust to seasonal changes in sunlight is that trout, like most fish, are more vulnerable to predation when clearly visible in the water. Therefore, when sunlight penetrates deeply into low-turbidity water, trout are conditioned to feed deeper in the water column. Therefore, adjusting lures to account for the sun’s position and water clarity helps me stay in the feeding zone.

In April, brown shrimp reach a size large enough to be worthwhile as food for trout, and they are leaving the shallow marsh and entering larger bodies of water where they are accessible to schools of trout. Biologists believe that speckled trout will intentionally target shrimp around their spawning periods, because shrimp provides optimal nutrition for egg growth. So all but the largest trout will be feeding heavily on shrimp by the end of April.

I have not found it necessary to exclusively use lures that imitate shrimp when trout are chasing shrimp. It seems like imitating the action of shrimp and secondarily, the color of shrimp, is adequate. Arguably, the best shrimp imitation for April is a popping cork with a jighead and soft-plastic bait. However, if you are targeting larger trout, larger-profile jerkbaits, topwater baits and twitchbaits work exceptionally well in April.

One of the reasons hard baits work well in April is that a number of finfish species are very abundant and rapidly growing. One such fish is the Atlantic croaker, which breeds in the winter on the outside; the larva comes into the marsh to grow. By April, fast-growing croakers are around 3 inches long and very plentiful on bayou bottoms. Croakers are a favorite, high-protein food for speckled trout, and I find the stomachs of many larger trout caught in April filled with these little croakers.

Equally important as a food source for larger trout in April are immature striped mullet, of the size called “finger mullet.” Like croakers, they were spawned on the outside but come to the protection of the marsh for their first few months of life. They are 3 to 4 inches long in April, and schools are seen feeding along the surface in what looks like rafts of fish. These finger mullet are easily imitated by anglers with topwater stickbaits such as Spooks and SheDogs. Since mullet travel along the MRGO rocks feeding on the surface, throwing topwater baits during the early morning hours along the rocks is a recipe for huge explosions as big trout attack the baits.