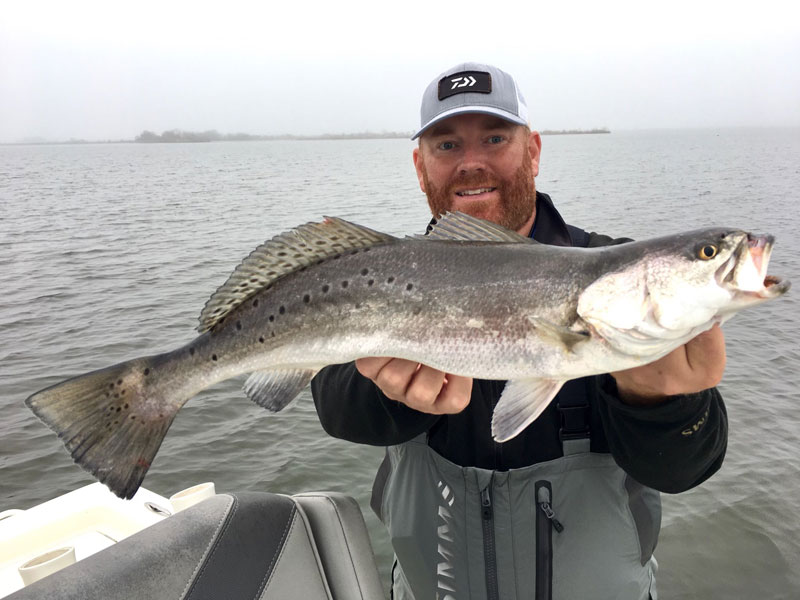 I’ve fished for speckled trout with nearly every style of lure invented. If it looks like a mullet, pogie, glass minnow, cocaho or shrimp, it’s probably spent some time tied to the end of my line.

But there’s one thing I’ve always wondered: why do specks hit hard-plastics so much harder than soft-plastics? It’s almost universal. If you’re working a twitchbait like a MirrOdine, or a jerkbait like a Rapala X-Rap, one moment you’ll be minding your business, waiting to make your next twitch, and the next, the rod will nearly be yanked from your unsuspecting hands.

It’s always such a thrill that it makes fishing hard-plastics even more desirable, and that’s especially true this time of year, when they’re so productive.

On spring mornings, when he’s out fishing for fun, Capt. Justin Bowles of JB Fishing Charters has a hard time keeping topwater lures locked up in his tackle sleeves, particularly when water temperatures are in the 70s. But when temperatures are down or the sun is up, he has a tendency to reach for subsurface plugs.

“In spring, fishing grassy, flat areas, I prefer to use non-lipped, hard-plastic twitch baits, like a MirrOdine (or) a MirrOdine XL; those are the two main ones I throw,” he said. “I’ll also throw the SoftDine, and then if it’s more shallow, I’d throw the regular Corky.”

These lures can certainly produce anywhere, from bayous to bays, but there’s a specific scenario that makes subsurface twitch baits irresistible to Bowles in the spring. It’s one that’s prevalent in the eastern Pontchartrain Basin area that Bowles fishes.

“I just look for submerged grass over a 3- to 5-foot flat, and of course, I look for bait in the area and decently clean water,” he said.

When he finds that, he breaks out his hard-plastic trout tackle.

“I normally fish them on a light-powered rod with 20- to 30-pound braid (and) 12- to 15-pound fluorocarbon leader,” he said. “I cast it out, let it sink and then twitch it with long pauses in between. If I start picking up grass or hitting bottom, I’ll speed it up.

“I do two twitches and then a pause — a pretty long pause if it’s not too windy and making you drift too fast. The slower that you can fish those baits, the better, especially if you want big fish.”

Also, stealth is CRITICAL when fishing this technique. Speckled trout in the spring are much less likely to stick around if they know you’re there. The fish that were so oblivious to crowd noise in the winter simply won’t abide it in the spring.

“If you’re fishing over a flat, you want to be drifting,” Bowles said. “If the wind’s blowing you too fast, I’d use a drift sock to slow myself down. Otherwise, I’d Power-Pole down and fan-cast the area, and then drift a little further and Power-Pole down again.

“If you’re trying to work the trolling motor and are fighting the wind or the current, all you’re doing is making noise, and you’re pushing those big fish farther and farther away from you. At that point, you’re just chasing your tail.

That’s especially true if you’re looking for fish to take pictures of and post on social media. Every speckled trout angler has caught school trout on hard-plastic baits, but those who fish them regularly aren’t necessarily interested in numbers.

“You’re not really fishing for limits of fish but fishing for quality fish, so you want to just keep covering water,” Bowles said. “It’s usually not like you pick up 10 to 20 fish in one stop fishing these lures.”

In recent weeks, Bowles has caught specks up to 23 inches on hard-plastic baits. That size should increase this month.