Here’s our prediction on how the high river water will affect speckled trout movement this month.

Inshore fishing around New Orleans is so synonymous with the beloved speckled trout, that any event that threatens the productivity of speckled trout fishing is worriesome, but nothing strikes more fear in the heart of New Orleans anglers than the prospect of the Bonnet Carré flood control structure opening.

On Feb. 27, the U.S. Army Corp of Engineers began opening bays in the flood control structure and by March 19, 196 bays were releasing the brown water of the Mississippi River straight into southwestern Lake Pontchartrain at 213,000 cubic ft/second. This is enough water to refill Lake Pontchartrain in just 12 days. The Corp of Engineers closed the diversion on April 10 but Heavy rains across the valley prompted a second opening of the spillway May 10.

What’s more, the river is still in major flood stage and rising, though held in place by the levees. Meteorologists say they expect it will stay in flood stage “well into summer.” 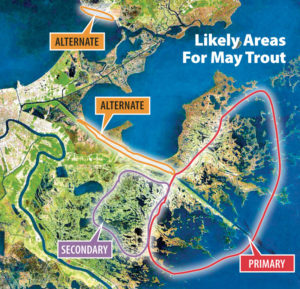 It’s hard to catch speckled trout in brown river water, and in 2019 the brown water from Bonnet Carré spread through Lake Pontchartrain, Lake Borgne, and into the Mississippi and Chandeleur Sounds.

The river water forces speckled trout in these areas into patterns not typical for the season. Adding hardship to pain, the Mississippi River is by default already pouring brown water from its mouth and numerous diversions into the bays bordering the river reaches south of New Orleans. At its peak, satellite views depicted most inshore waters east of the Mississippi River with a trout bite-killing brown stain.

So am I stashing my trout fishing gear this summer? Certainly not, and I think you also will have renewed hope after we look at the facts surrounding river water and speckled trout behavior.

Why does the river water turn the estuary brown

From a satellite’s viewpoint, the brown river water spreads quickly through the estuary, but we are seeing only the top layer of water on a satellite image. It takes time for freshwater, which initially flows on top of the denser brackish and saltwater, to dissolve salt and homogenize with the higher salinity water, so the river water can travel quickly over long distances by remaining on top of the water body.

Mixing of the water by currents and wind accelerates the homogenizing process, so shallow marsh lakes will equalize salinity faster as compared to the deep channels, where it may take a very long time to homogenize the full volume of water. Therefore, deeper channels can provide refuge from the turbidity of the river water onslaught.

The Mighty Mississippi transports silt and sand from many states and gives it to Louisiana at no charge, and it is these particles that turn the river brown and turbid when they are suspended in the water by strong currents. The Corp of Engineers reports that the opening of the Bonnet Carré will deposit around 9 million cubic yards of sediment onto the spillway alone. Shockingly, this amount of sediment is equivalent to a football field that is 5,000 feet tall! Not all of the particles staining the marsh originated from the river water either. Some are picked up from the marsh sediments by the increased water flow due to the influx of river water.

How does the estuary clean itself?

The first point of good news is that the silt and sand particles are only in suspension, which means they can fall out of the water. The typical particles are at least 2.5 times heavier than freshwater or brackish water, and therefore, many particles fall out of suspension where the current slows down. In the picture on the left we can see how few particles actually exist in a sample taken from the riverside in Baton Rouge. I suspect that the abundance of brown particles we see in the marsh are actually entrained, light marsh sediment and not from the river itself.

The dropout of particles is further accelerated where submerged vegetation is present. Here, light particles become trapped on the vegetation as the water passes by and agglomerate with other particles into larger, heavy grains, which are shed and drop to the bottom as sediment. Additionally, where oysters are present, active filtering is happening. A single oyster can filter particles from water at a rate equivalent to a 55 gal. barrel each day. So, in multiple ways, the suspended particles from river water are removed and this returns the estuary water to its typical clarity.

Firstly, speckled trout are a euryhaline fish species, so the negligible salinity in the river water is not a physiological hazard. We do know that large trout stay in high salinity water by preference, but for the majority of our trout population, living in low salinity water is normal for the colder months of the year.

If not the low salinity, what drives the trout away from the river water? A heavy concentration of suspended solids in water will negatively affect the respiration of fish and induce stress leading to greater energy consumption. I imagine that the effect on the fish is similar to the gagging we feel when breathing in dust, and our response is to move out of the dust cloud.

However, it is my belief that the major factor driving away the trout is the deterioration of their feeding conditions. Speckled trout are primarily an ambush, sight feeding species. And while sight is aided by sound wave receptors in a trout’s lateral lines, my experience suggests trout still need at least 6 inches of visibility through the water in order to feed, and the visibility in a heavy concentration of river water can be just a few inches. Light penetration is also reduced by the particles, which further reduces their ability to see food.

All these factors can push the feeding energy balance into the negative range causing trout to move away from river water in search of better water conditions.

How to fish the aftermath of the spillway opening

The opening of the Bonnet Carré diversion caused the majority of the trout to prematurely leave areas where they would otherwise be in May and a significant volume of river water continues to flow into the marshes along the river and into Breton Sound.

This abundance of river water will not stop you from catching trout but it will force you to adjust your fishing strategy.

I will still search for trout in the same general regions of the estuary east of the river, because telemetry studies on speckled trout from Florida, Louisiana, and Texas have shown that most trout remain in the estuary where they grow up, or within a 30-mile region.

One example are the studies down in Calcasieu Lake from 2007 – 2009, supported by the Louisiana Department of Wildlife and Fisheries (Sex Differences in Residency of Adult Spotted Seatrout in a Louisiana Estuary). They inserted transmitters in speckled trout and used tracking buoys to observe their movements. The results showed that most trout remained inside the lake or only left temporarily in the summer despite periods of high Calcasieu River flow when the turbidity of the lake was high. This study demonstrated that trout can sustain themselves in an estuary being inundated by fresh, turbid water.

Based on the telemetry study results, the trout should remain in Louisiana waters on the east side of the river, but they will concentrate in pockets of clearer water and along the leading edge of the river water plume, where they can successfully feed. This creates an advantage for anglers, concentrating the trout in the best water. However, it is important to consider whether the area with clear water is a large enough habitat to retain fish.

To find the pockets of clearer water within an area inundated with river water, look in ponds with submerged grass or in areas where the water flow is slow enough to allow dropout of particles. There will also be clearer water deep in channels like the MRGO.

Be an acute observer when looking for adequately clear water. A subtle increase in the visibility can be enough for trout to feed when bait is present, but do not waste time fishing in opaque water even if it has bait sized finfish.

Use the salinity data from the USGS Stream Flow stations to find the edges of the river water plume along with the daily satellite images from sites such as MODIS Today and NASA WORLDVIEW. The edges of the plume can be used as guideposts for where the clearer water begins and can even identify large pockets of clear water, which appear dark relative to the brown river water.

How the river water affects the 2019 spawn

Trout sense when it is time to spawn by rising water temperature and the length of daylight. However, the river has kept affected waters cooler leading up to the 2019 spawn. The river water is colder than the gulf water, dropping inshore water temperatures east of the river below normal.

This colder water counteracts the trout’s instincts to leave the marsh in April and May. Therefore in May, don’t be surprised to find breeding-sized trout in clearer upper estuary ponds and lakes which are not directly impacted by the influx of river water.

However, by the end of May, the egg development in female trout will instinctively spur them to find higher salinity water in preparation for spawning. Because of the abundance of river water, they will need to adjust where they go either by traveling to areas closer to the Gulf of Mexico or toward areas less inundated by the river water.

By the end of May, trout will move to high salinity waters.

The distance they need to travel depends on the strength of May tides, wind speed, and wind direction. Strong tides will increase the salinity in inshore waters, and to a lesser degree, strong south and southeast winds will also cause an increase in salinity. Fortunately, there are strong tides predicted for the second half of May, and if the winds do not block the tides or if they assist with strong south winds, the trout may not have to travel far to find high salinity water.

From an angler’s viewpoint, the best scenario is for high salinity water to be present on the edges of the marsh. Otherwise, anglers will have to travel longer distances across open water to reach spawning trout in June.

Monitoring water salinity using the USGS Stream Flow stations throughout the month of May can help point anglers in the right direction about where to look for pre-spawn trout. Fishery biologists have designated a salinity range of 17 ppt to full saltwater as the typical breeding conditions.

However, I have had epic days catching limits of larger trout in actual salinity of around 10 ppt in August, so there is some variance on where spawning trout can be found. Salinity plays a role in effective fertilization of the eggs, because salinity increases water density and provides additional buoyancy to the eggs and sperm, which interact while floating.

Since May is considered to be a pre-spawn month for speckled trout in Louisiana, it is not necessary to target the spawning salinity range. However, we are likely to be most successful targeting either clear water lakes in the upper estuary or lower estuary areas where the Gulf waters have mixed with the river water and provided greater clarity. Use the salinity gauges to look for areas with high concentrations as an indicator of clearer water.

Adam Shields has a strategy to intercept a speckled trout’s transition this month by using travel routes and baitfish habits against them. […]

About Jon Miller 35 Articles
Jon Miller is an engineer, lifetime fisherman, and host of the YouTube channel Jon Miller Fishing.