Fish the reefs and under the birds this May

Nick Poe, a charter captain in his 11th year of guiding and the son of Jeff and Mary Poe — who own Big Lake Guide Service — said as much on an unseasonably cold morning in late March. At the time, salinity was high and fishing was fair to good for speckled trout, with smaller fish dominating the catches.

Poe was looking forward to fishing in May, knowing full well the bite should be good wherever he finds birds pickin’. And if he’s catching small speckled trout on a soft plastic under the birds and there’s a chop on the water, he’ll switch gears to serve up a chrome/pink, chrome/black or chrome/blue MirrOlure She Pup, a smaller artificial lure, because the bigger speckled trout are suckers for smaller baits, he said.

Much of the time, though, will be spent around artificial reefs on the lake’s south end, plus an artificial reef in the mid-lake area, all in 5- to 7-foot depths.

For sure, the rest of the spring future looks bright considering the way the speckled trout have been biting consistently in early spring, he said. He expects more to be caught as they head south.

If the birds aren’t flying, fish the reefs

“They start moving south by May, when the water temperature starts getting up. If you’re not fishing the birds, fish the reefs on the south end of the lake,” Poe said. “Really and truly, all the artificial reefs, all the numbers, you can find them (speckled trout) anywhere you want to.”

Barring torrential rains in the early spring, the salinity ought to be perfect.

“The (artificial) reefs really have helped us out a lot,” he said. “I wish we could get our regular oysters back.

How to approach a reef

“One of the most productive reefs on the lake last year was Jack Lawton (Big Jack’s) Reef. It’s been really productive the last few years, especially about May,” he said. The reef’s coordinates are N29 53.248 W93 16.937.

The key to catching speckled trout on those artificial reefs is in the approach to each site and, later, the method of fishing it. Poe said he gets off plane about a quarter-mile from where he plans to fish, then idles to within approximately 600 feet, shutting the outboard engine off and putting the trolling motor down.

Try to use everything (weather conditions and tidal movement) to your advantage, he advised. Remember, he said, there is a predominantly south wind in May, so drift downwind and use the trolling motor as sparingly as possible.

Coordinates for other artificial reefs that produce in May on Big Lake: 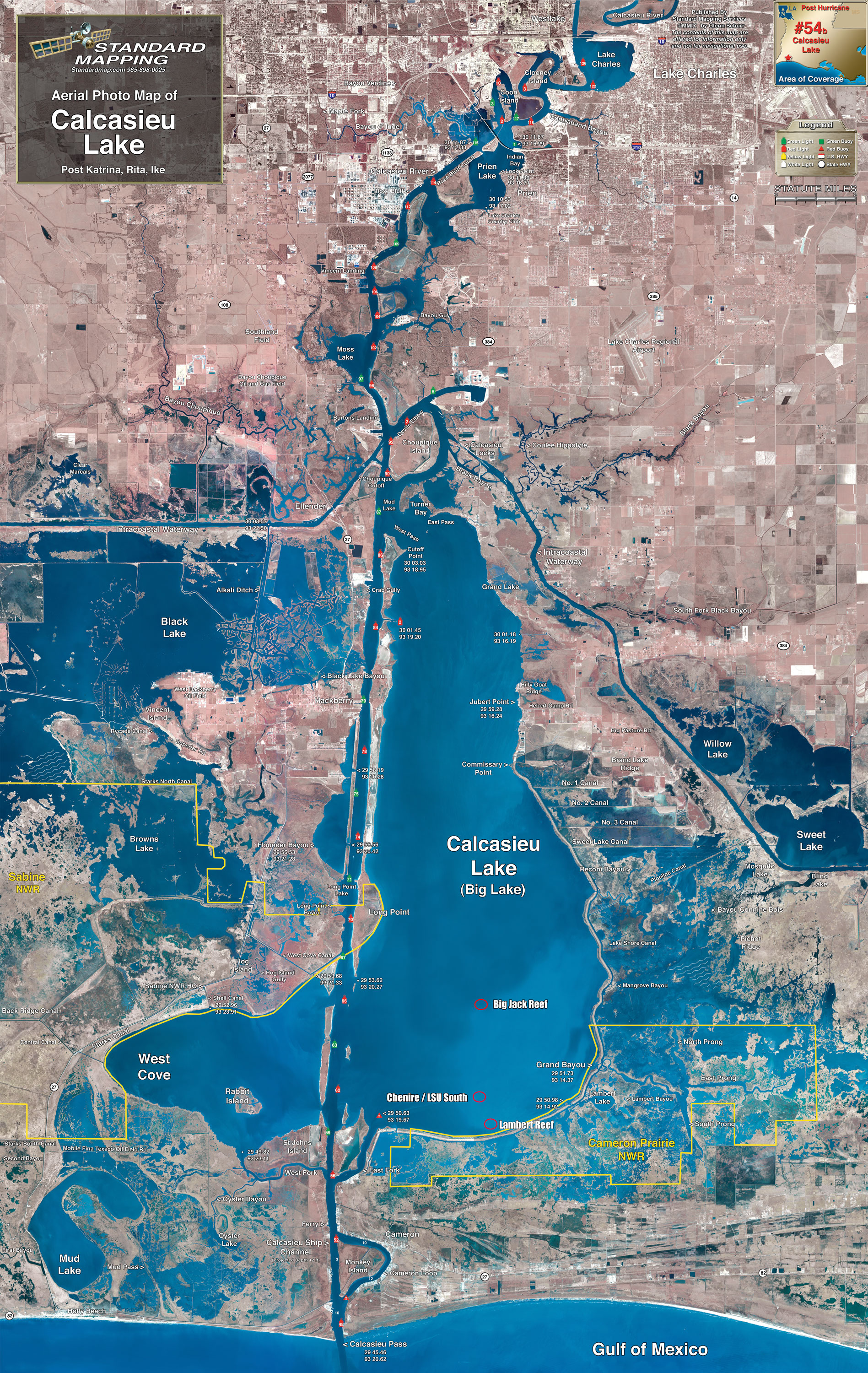 Ninety-nine percent of the time at artificial reefs, Poe fishes with a soft plastic, specifically a MirrOlure Lil John on a ¼-ounce leadhead. He sticks with about four colors, starting with watermelon/red, he confided. His other favorites are opening night (one of his dad’s favorites, too), golden bream and glow.

“Watermelon/red’s good pretty much in any situation. It’s a decent dirty water bait,” he said. “I don’t fish with a whole lot of colors. I try to fish with one that works. I tell people all the time, ‘It doesn’t matter what the color is, if you’ve got confidence in it, you’ll probably catch.’ ”

Poe’s basic rule of thumb for soft plastics is to throw translucent colors when the water’s pretty, and gold, black and purple in dirty water.

Also on tap, there’s no time like May to catch bull reds in the mid-lake area of Calcasieu Lake, Poe said. The area’s close to most access points; you don’t have to get natural bait, and you don’t have to travel far as you would for slot redfish this time of year.

Bull reds travel in schools there, so it’s sometimes challenging to keep up with them day-to-day, he said. To locate them, look for birds — specifically terns — slicks and muddy areas in the lake. Muddy patches in the mid-lake area could mean bull reds or shrimpers, so if you don’t see a shrimper around, get ready to bust some bull reds.

Bull reds feed against the current, and the schools move very fast. On an incoming tide, generally they’re west, southwest, and on an outgoing tide, moving northeast. Stay ahead of them. Draw a mental picture of where they are and where they’re going, anticipate.

They can be caught on anything you’ve got in your tackle box when they’re up and eating, Poe said. If an artificial lands in front of them they’re going to eat it.

The Louisiana Department of Wildlife and Fisheries has released an updated survey to gather public input on spotted seatrout management. […]

Speckled trout are here, there and everywhere

About Don Shoopman 431 Articles
Don Shoopman fishes for freshwater and saltwater species mostly in and around the Atchafalaya Basin and Vermilion Bay. He moved to the Sportsman’s Paradise in 1976, and he and his wife June live in New Iberia. They have two grown sons.